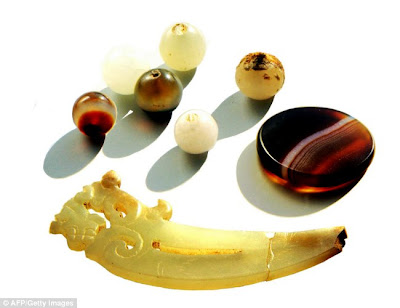 Report from The Daily Mail on December 29, 2009 - with some photograph's of the tomb's interior. The tomb was evidently discovered about a year ago but not reported, and has been extensively looted in the meantime. Some locals were arrested with artifacts that alerted authorities to the tomb's existence, and archaeologists presume they were taken from 'this' tomb. 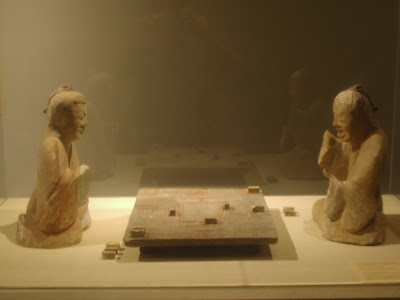 The article contained this image of 'agate decorations.' It's difficult to say from the photograph, but perhaps the round items are beads from a necklace, as it looks as if at least two of them might have dirt-filled holes drilled in them. The flat disc - a gaming piece possibly? (Liubo image: from Wikipedia Commons, taken at the New York Metropolitan Museum of Art: A pair of seated earthenware figures playing on a model Liubo board game, made during the 1st century in the Chinese Eastern Han Dynasty (25–220 AD).) At first glance I thought the round objects were game pieces, but I do not believe the Chinese of the late Han played marbles. It is possible, I suppose, that they are gaming pieces but the only pieces I've seen from Chinese games of the period are flatish discs used in wei qi (an indigenous game) and the Chinese version of backgammon (imported from ancient Persia no later than the late 3rd century BCE according to Murray), and small rectangular or square pieces and throwing sticks for liubo. Also sometimes mentioned in liubo are the existence of two "fish" pieces that were placed in the central "water" area - that, as far as I can tell, were flatish circular discs. It is a shame so much was lost from the tomb. Will we hear more about discoveries from this tomb in the future? For more information on liubo: BabelStone blog (by Andrew West): The Lost Game of Liubo BabelStone blog (by Andrew West): The Lost Game of Liubo Part 2 : Pictures of People playing Liubo Louis Cazeaux - Liubo Cultural China - Liubo Wapedia (Wiki) - Liubo
Posted by Jan at 9:01 PM