Mystery pharaoh and his tomb identified in Egypt

Charlene Gubash
Jan. 15, 2014 at 5:42 PM ET
CAIRO — A previously unknown pharaoh and his burial place have been unearthed amid the tombs of other Egyptian kings, and archaeologists say the find could lead to still more royal discoveries.
The pharaoh's name, Senebkay, was found inscribed on the wall of a burial chamber that's part of the Abydos archaeological site, near the southern city of Sohag. Fragments of the name appeared on one list of Egyptian kings and queens, but no other trace of Senebkay had been found until now, said Ali Asfar, head of antiquities for the Egyptian government.

"This was the first time in history to discover the king," Asfar told NBC News on Wednesday.
He and other archaeologists say Senebkay lived roughly 3,650 years ago, during the second intermediate period of ancient Egyptian history. That was an era when several rulers vied for power — setting the stage for the rise of Egypt's New Kingdom around 1550 B.C. 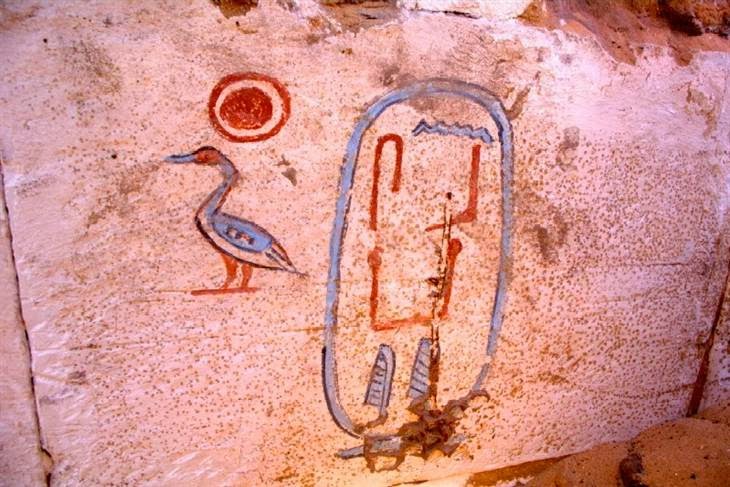 Holy Hathor!  I love that ongoing excavavations are taking place at this site.  What else will be uncovered as time goes on...

From PAP Science and Scholarship in Poland

The largest so far known in the Middle East amount of grain of the Neolithic period in a perfect state of preservation has been discovered by Polish archaeologists in Çatalhöyük, a famous archaeological site in Turkey.


Çatalhöyük is one of the largest urban centers of first farmers and one of the most famous archaeological sites in the world.

"In a small room with an area of approximately 7 m2 we discovered four clay containers. Each contained barley" - explained project pleader Prof. Arkadiusz Marciniak from the Institute of Prehistory, Adam Mickiewicz University in Poznań.

In total, from each of the two studied containers archaeologists recovered almost 5 kg of grain. Such amount and such a good state of preservation is a global scale phenomenon. In addition, a different grain cluster was discovered in the room. Archeobotanical analysis showed that it was an extinct species of wheat, popular in Neolithic times in the Middle East and Europe. The room in which the discovery was made was situated in the north-eastern part of the homestead - it belonged to a larger residential building, inhabited 8,200 years ago. It was the final period of the large settlement. According to Prof. Marciniak, only few inhabited households remained on the hill at the time.

The entire structure will be exploted in the coming research seasons. It is known already that the grain storage must have burned down: grain was charred at the temperature of several hundred degrees. Nevertheless, archaeologists were able to determine that the walls of the room were whitened from the inside. In addition to the grain containers, archaeologists found several ceramic vessels, also used for storage.

Çatalhöyük is located in the southern part of the Anatolian Plateau (central Turkey). So far, Polish excavations have focused in the central part of the tell - an artificial hill formed as a result of centuries of settlement. Currently, during the second season, archaeologists explore a part of the south slope.

The first excavations at Çatalhöyük were conducted in the 1960s by British archaeologists James Mellaart. The research was resumed only in 1993. International team is headed by Prof. Ian Hodder of Stanford University. Polish archaeologists joined the project in 2001.

Çatalhöyük was inhabited continuously for 1200 years between 7200 and 6000 BC. It is estimated that during its heyday, the densely built-up settlement with an area of dozens of acres had 6000 residents. The site became famous due to the paintings which decorated the walls of houses and other plastic interior decorations. They depicted human and animal figures as well as geometric motifs. An interesting fact is that the dead were buried under the floors of houses.

Last year's excavations continued from June to August. The work was possible with financial support of the National Science Centre under the Harmony programme.