What Would YOU Do...

You are an average Egyptian citizen in today's Egypt.  You are barely scraping by.  You have been through seemingly endless "revolutions" of governments and ruling systems but you know what, when it comes down to you, it pretty much has stayed the same.  You are still screwed no matter what you do.

So, you happen to live in a tiny little house on top of part of a temple.  You go exploring one night, digging down beneath the surface.  Dig dig dig.  You get 20 feet down and lo and behold, an entirely new world opens up before you.  Well, not exactly, since you have to remove the dirt bucket-full by bucket-full, and make sure your equally hungry (and greedy) neighbors don't get suspicious.  Hmmm....

Would you turn away from the potential for discovering countless treasures you could possibly to the Black Market dealers, accepting 10 cents on the dollar?  Or would you stand up and be a "patriot" and say "Oh no, these are treasures for the Egyptian state!  These priceless artefacts belong to our people as a whole.  I shall travel to Cairo tomorrow and report this important discovery to the Ministry of Antiquities."

So you travel to Cairo and report the find underneath your home.  The government comes with bulldozers and kills your home, meanwhile not offering you any kind of compensation because, hey, it's all for the good of the homeland, right?  You, nonetheless, comfort your now homeless and penniless family with the thought that you did what was right.  In the long run, surely, it was right. Those priceless antiquities will now be duplicated by the government and replaced with cheap imitations while the REAL artifacts reap the government ministers MILLIONS of dollars, all safe and secure in secret Swiss Bank Accounts.  And meanwhile, you and your family starve.

Yeah.  What would YOU do?

As much as I ABHOR, absolute ABHOR, the plundering of cultural treasures for filthy lucre, I DO understand the motivations behind the plundering of ancient archaeological sites.  Who, in the end, is more corrupt, heh?

Giza men arrested after digging up ancient temple under house

Seven residents of a Giza district have been arrested after they illegally excavated the area beneath their home and found the remains of an ancient Egyptian temple.

The huge limestone blocks, engraved with hieroglyphic texts, date from the reign of the New Kingdom's King Tuthmose III, and were found in the Hod Zeleikha area of Al-Badrasheen district.

The find was made two weeks ago, according to Major General Momtaz Fathi, an aide to the interior ministry and a director in the tourism police.  A unit from the tourism and antiquities police heard of the illegal excavation work and arrested the seven men – two of whom are Palestinian, Fathi said. [Does it make a difference if one is Palestinian or one is Egyptian when it comes to illegal digs, since they are ALL Muslims???  I mean, really, darlings, what difference does it make to them, since allegedly their one true "God" is "Allah," whose origins (before the old "switcheroo") go back to a Moon Goddess?]

The police also found diving costumes, oxygen cylinders and diving masks with the detainees. [Okay, what does that have to do with any illegal excavation your home in Giza -- A FRICKING DESERT?]

Antiquities Minister Mamdouh El-Damaty said that the unearthed blocks are genuine and belong to a huge temple from the reign of King Tuthmose III.

Seven reliefs and two marble columns were unearthed along with a huge red-granite armless colossus of a seated person, El-Damaty.

The items have been brought to the Saqqara site for restoration and further study, the minister said, adding that the Hod Zeleikha area has now been declared an archeological site and under the control of the ministry in order carry out more surveys nearby and unearth more of the temple.


What really gets me is how MUCH these "policemen" resemble Egyptians depicted in ancient tomb drawings: 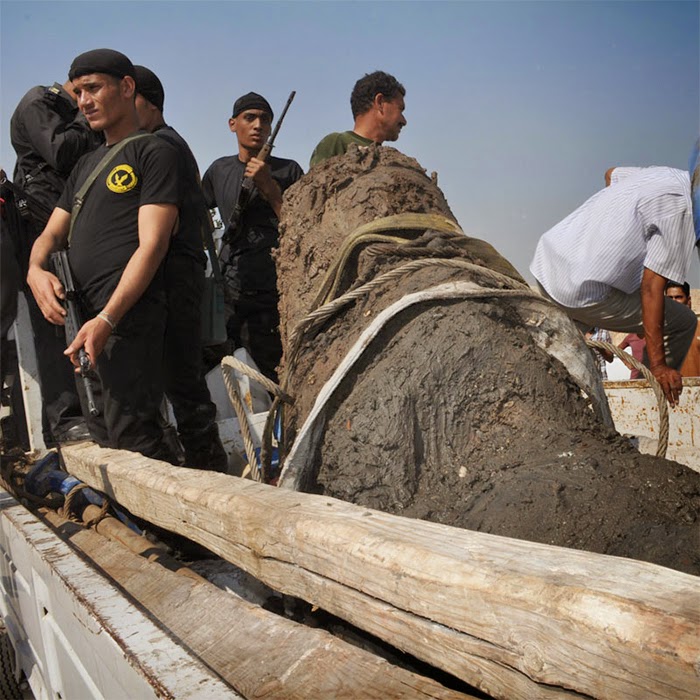 Take away the guns and the long pants.  Egyptians haven't changed at all over 7000 plus years, physically.  But they buy the bullshit, don't they.  Well, a man has to do what a man has to do to make some money and survive. Never mind the wife and kids back home, and you keep repeating the same ridiculously losing cycle over and over and over again.  Whatever.
Posted by Jan at 5:17 PM No comments: