Is Rex S. pulling his hair out of his head?  Geez, it was bad, people, BAD!

The Open (a/k/a Men's) Team finished in 14th place overall.  Really?  The Netherlands, France, Cuba and Israel finished ahead of us (US).  Holding my nose as I look at the final results.  HOLY HATHOR.  Will the USCF now try to pass this off as some kind of great victory?  I sure the hell hope not.


HUNGARY'S OPEN TEAM with GM Judit Polgar playing Board 5 (WHAT?), takes the silver medal.  Go figure! A fine way for the fabulous Judit to go out on, heh?

Let's look at the USA men's individual performances -- were they worth the money laid out?

And then, there are the women.  They showed some verve, finishing overall in 8th place, one spot below their starting rank:


The Russian women's team was on fire - totally (and rightfully so) pissed off about the political BULLSHIT that went on to try and keep the team out of the Olympiad.  Ha!  Up yours, FIDE, a collective message from Russia's female chess players, with Love, darlings.  Too bad, though, about Lahno jumping federations.  That was poorly done, poorly done, Kateryna.


One of my favorite players, Alexandra Kosteniuk (12th Women's World Chess Champion), played well on Board 3.  I would love to see her hit 2600 ELO.  It won't be easy, but this is one tough competitor.  Don't be fooled by her lovely exterior and gentle manner; she's got the heart of a warrior, no question.  Valentina Gunina was also outstanding, gaining 15.6 ELO ratings points!


None of the women had break-out performances, but Tatev Abrahamyan and Sabina-Francesca Foisor performed above their ELO ratings.  A respectful nod, too, to Anna Zatonskih, who helped prevent Team USA Woman from sinking further in the standings by her steady play on Board 2.  She as the only American player who also finished in the Top 10 for her individual performance on Board 2.

Here's a question:  Do the big pay-offs bankrolled by Rex S. for becoming USA chess champions make the winners fat and lazy?  Gata Kamsky on the "Open" (a/k/a Men's) Team and Irina Krush on the Women's Team - sucked. 'Nuf said.


I take my hat off to GM Pia Cramling, who continues to show her true grit.  Do you know -- she was the second female player EVER, after GM Susan Polgar, to earn her GM title the traditional way (no concessions for being a female player, in other words).  She is one of the people I would most like to meet before I croak, let me tell you!  I would love to just take a nice long walk with her through a lovely wilderness preserve, and ask her questions, and see where the conversation goes.


Boo!  None of the female players earned a GM norm.

Kudos to GM Sam Shankland of the "Open" (Men's) Team USA for winning a Gold Medal on Board 5.  Will he become a certain someone's next Golden Boy? Maybe.  Those results speak for themselves.  Will Naka find himself tossed to the gutter?  Well, hasn't he always wanted to go back to New York...


That's it from Milwaukee, folks.  I'm going back to cooking up some Polish-style drumsticks (don't ask) and unpacking yet more boxes from the never-ending move of Maison Newton.  Smooches.
Posted by Jan at 9:28 PM No comments:

Um, I thought she did this years ago, except for the occasional urge to make some appearance fees at special events or serve the call of her homeland (as in an Olympiad).  It's been clear for some time that Judit P.'s heart was no longer solely dedicated to the game. One reaches the point in one's life where too many other things are calling out to one...  And, as we know, Chess is a very jealous lover.

Here's a link to the report at The Week in Chess.

Will there ever be another female player of Judit Polgar's calibre?  Not in what's left of my lifetime, unless there is an undiscovered "prodigy" out there who will stun the world during the next 5-10-15-20 years or so.  I can always hope that will happen; otherwise, female chessplayers will continue in their chess ghetto, earning half (or much less) than mediocre male chessplayers.

Personally, I won't ever forget actually seeing JP play in person at the FIDE World Chess Championship held at Caesar's Palace Resort Complex in Las Vegas, Nevada, in August, 1999.  I saw her in only one game -- a quarter-finals game, on Friday, August 13th.  She should have won, that's an auspicious number for chess goddesses.  However, she was knocked out of play by GM Alexander Khalifman, a long-shot who went on to win the title.  I was close enough to nearly reach out and touch both of them, I'd only have to have gone a little bit over the red rope separating the row of seats I was in to where the players' table were, but of course that would have been a horrible breach of ettiquette!  I should have done it...

JP's legacy, and that of the three Polgar sisters, will always be part of chess lore.  For that, I am grateful.  They stand as beacons of enlightenment to other aspiring female chessplayers, if they work hard enough (as hard as the best male players, who get utterly obsessed with the game).  Remember - 10,000 dedicated focused, hours of practice and study...that is what research has shown is necessary for most anyone to become an expert at any endeavor.

An absolutely amazing story out of Siberia.  A three year old girl lost in the wilderness for 11 days survived!  Read how.

All hope is lost when her dog returns home without her; then the dog leads rescuers to the missing 3-year-old, who was called the miracle girl

A little girl lost in a remote region of Siberia inhabited by bears and wolves survived 11 days in the subarctic forest by eating wild berries and drinking river water before her dog finally left her side to summon help, leading rescuers to her location.

Karina Chikitova, 3, wandered away from her home in a remote village of the Sakha Republic on July 29, according to The Siberian Times and U.K. MailOnline.

Her mother believed Karina and her dog had followed her father, Rodion, who had left to go to his native village. Because there were no phone connections, it wasn’t until four days later that the family discovered Karina was missing, prompting a massive search.

Sakha is said to be Siberia’s coldest region in winter, but this time of year overnight temperatures were about 42 degrees Fahrenheit, though some parts were colder. Karina hugged her dog and huddled up in the tall grass to stay warm, but that made it difficult for rescuers to spot her from helicopters and drones.

Two days before Karina was found, her dog returned to the girl’s home in the village Omon in the Olyokminsky district.

“That was the moment when our hearts sank, because we thought at least with her dog Karina had chances to survive; night in Yakutia are cold and some areas have already gone into minus temperatures,” Afanasiy Nikolayev, spokesman for the Sakha Republic Rescue Service, told The Siberian Times.

“If she was to hug her puppy, we thought, this would have given her a chance to stay warm during nights and survive [she wore only a tank top and purple stockings]. So when her dog came back we thought ‘that’s it’—even if she was alive, and chances were slim—now she would have definitely have lost all hope. Our hearts truly and deeply sank.”

By that time, the family had lost hope.

Experts said chances of survival for such a long period were minimal. Rescuers confronted a bear during the search, highlighting the danger of the region.

Karina’s dog led the adults to the lost child, or as The Siberian Times called her, the miracle girl. With the dog’s help, rescuers discovered bare-foot tracks in the dirt, which helped lead them to the girl. 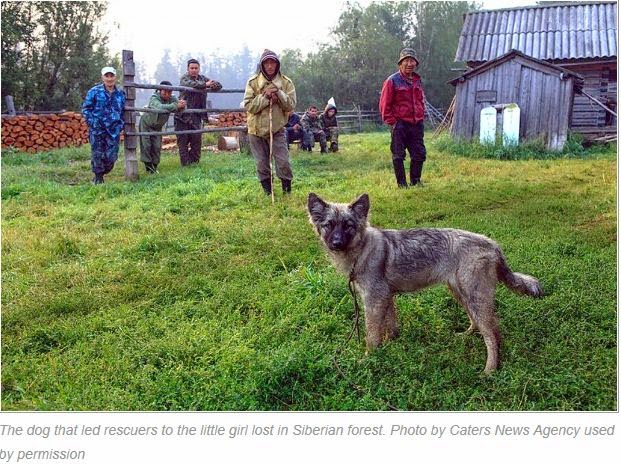 “In the morning, almost right after we began searching—we only made 20 meters—we saw Karina sitting in the grass,” Nikolayev said. “We rushed to her, got her a little tea and grabbed her to run back to the car and doctors.

“I carried Karina myself to the car, and she was light as a bird. She was hardly ten kilograms [22 pounds], but amazingly she was fully conscious.”

Karina was said to look surprisingly well. She was given food and drinks, and was taken to the hospital in Yakutsk, though she had no serious injuries, only scratches, particularly on her feet from walking long distances without shoes. Plus, she had several mosquito bites. 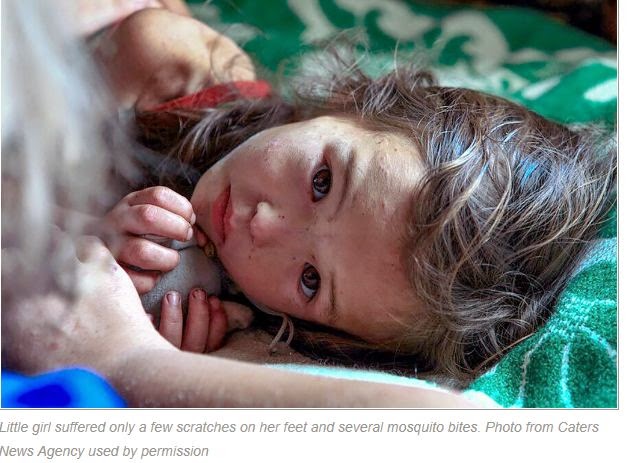