The Goddess and the Green Man, Samhain, the Pleiades and the Four Quarter Days

Hola darlings!  Today is Hallowe'en.  Because of the pandemic, there is no trick or treat this year in my city, and no nighttime neighborhood children will be out in their costumes going door to door as my subdivision normally hosts.  In a way I'm relieved, because it's  windy out there today, and I can imagine it will be very cold again tonight.  When I got up this morning there was a heavy frost on most everything and the water in the bird bath was frozen.  Brrrrrrr!

Yesterday morning I received Katherine Neville's Newsletter  October 30, 2020 "Time Out" Newsletter, which she titled "Three Days Out of Time."  It was brief but fascinating; she explained how Hallowe'en arose out of an ancient Celtic celebration called Samhain.  I was shocked to discover that the word is pronounced "sow-win."  Why on earth is it spelled like it is?!?

As I mentioned long ago, in my 2009 Hallowe'en Newsletter: tomorrow--beginning at Sunset on October 31--we enter a period of Time that resembles pushing the "pause" button on a video or musical recording:
"In the ancient Celtic calendar, so it is said, All Hallows Eve (which begins at sunset on October 31) marks the end of the old year, and the new year doesn’t begin until dawn on November 3. The intervening days (All Souls and All Saints days in the Christian calendar) are days outside of Time, days when we can celebrate what happened in the past and discover what is about to happen in the future."

Neville, one of my favorite authors, wrote the incredible novel "The Eight," a book that I can easily say changed my life in ways I never would have dreamed possible.  I could not recall ever having read or heard that particular description of what Samhain is about.  And, as she usually does in her always too short newsletters, Neville wrote just enough to intrigue me; I went digging around on the internet a bit to get more information.

I found the idea of taking a "pause" or "time out" to think about the past and contemplate the future is just what I need right now, a necessary and welcome break.  I could not help but ponder the past four years, during which I dedicated my efforts, my skills and my money to take Wisconsin back, one office at a time. from what I believe to be destructive political forces and restore our state to the great state it was before 2010.  I also worked to advance the same cause in elections around the United States.  On November 3, 2020, three days away - Federal and State election day for us, those "three days out of time" will wane, and early voting tallies after the polls close may reveal what direction the United States will take for the next four years - our future.  I could not have imagined that what many consider one of the most consequential elections would take place in my lifetime.  But here we are. 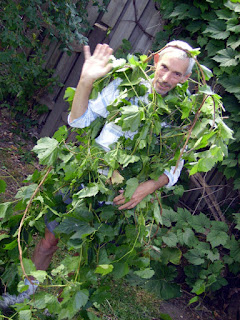 I discovered an interesting website called the Goddess and the Green Man out of the UK, and an article on the origins and traditions of Samhain.  I couldn't help but think of Mr. Don during our Goddesschess get-together in August 2007 at my place, along with Georgia (a/k/a Isis) and her daughter, Michelle.  He did a lot of yard work around the house, helping me get the back and front yards in tip-top shape for Georgia and Michelle.  I had him tackle chopping down and getting rid of an out of control wild grapevine that had possessed the wood picket fence along the north line in the backyard.  Here's a photo of Don as the Green Man, dressed in some of the remains of the wild grapevine (you can see he still had a great deal to do as the bulk of the grapevine, still up on the fence, was laughing at him behind his back!)

As the legend of Samhain goes, the Goddess is born again in the spring as the Virgin, but at Samhain she is old and worn out, the hag (witch).  Her mate, the Green Man, has died from the cold and the increasing darkness but the harvest is safe and secure in storage.  In his honor, the Green Man's remains are seeded in the earth during the Three Days Out of Time, in which the past is recalled and the future is pondered, awaiting to be discovered.  A new year starts at the end of the third day (daybreak on November 4).  The Green Man will be reborn in the Spring on the Equinox from his seeds.  My own Green Man passed away in his sleep on October 12, 2012.  I hope he has been reborn, the world needs more people like Don.

I also found this very interesting article at EarthSky on astronomy and learned more about Samhain (never too late to learn something new).  Halloween, the modern descendant of Samhain, is one of the four cross-quarter days.  I don't recall ever reading or hearing about cross-quarter days, but after reading the article they makes perfect sense!  Basically, there are eight main dates on the ancient calendar - the Summer and Winter Solstices and the Spring and Autumnal Equinoxes.  About mid-way between each solstice and equinox is one quarter-day (Autumnal Equinox - Hallowe'en (quarter-day October 31) - Winter Solstice -  Ground Hog Day (quarter-day February 2) - Spring Equinox - May Day (quarter-day May 1) - Summer Solstice - Lammas (quarter-day August 1; cycle repeats), marking eight main days of celebration or Holy Days/Days of Memory on the ancient calendar.

These eight days marked on the calendar, as noted in the article "Samhain/Halloween" at the Goddess and the Greenman website are called "The Wheel of the Year."  I was reminded of a ship's wheel which generally feature eight spokes, and how many ancient cultures compared the Heavens to the seas on Earth.  Water, of course, is the ancient "void" and with the water there was only darkness and a shapeless chaos, out of which light (life) sprang forth.  The analogy from the ancient Egyptian tradition is in the Biblical account of creation at Genesis 1:1-5.  The ancient Egyptian god Nun (or Nu) and his female double Naunet is/are the origin from which all things were created.  Nun represented the void/the dark waters that surrounded an amorphous something, out of which sprang his "son" who was known as the Creator god Atum or Atum-Re - the original sun god from which light sprang forth.  So again, there are the elements of creation:  a watery void (sometimes depicted as a canopy of water over a "sky" hovering above an amorphous gaseous nothing, and darkness, and from out of these elements first light and then life springs forth.  Nu and Naunet were part of the most ancient gods and goddesses of Egypt, the Ogdoad or eight (yes, there's that eight again): Naunet and Nu, Amaunet and Amun; Hauhet and Heh; and Kauket and Kek. It is no surprise that Moses, to whom the writing of the Biblical account in Genesis is attributed, would analogize the creation of the Earth and the life on it to the Egyptian account with which he was no doubt quite familiar, having been raised by Pharaoh's daughter as a member of the royal court.

The constellation "The Seven Sisters" (Pleiades) also has an ancient connection to Samhain. (Read more about it at souledout.org "Halloween and the Pleiades.")  The tiny "dipper" shaped constellation is one of my favorites from my sky-exploring years in my pre-teen and early teen years.  If we do not have clouds tonight, I will go out and look for them in the sky.  Right now you can spot it where Mars rises after the sun sets.  It's hard to miss Mars in the eastern sky, it is one of the brightest "stars" out right now.  It was spectacular last night, but I wasn't looking in particular then for the Pleiades!

We're also experiencing a full Moon tonight, folks.  You know what a lot of people (anecdotally, police and medical personnel) say about how strange or cray cray things happen when it's a full Moon.  I can't help but wonder if Katherine Neville was well aware of all these things when she wrote her brief paragraph about "the Three Days Out of Time," and said just enough to make some of us curious enough to go digging about for more information.  Hmmm...