"...the volcanoes decreased average global temperatures by as much as 3.6 degrees Fahrenheit. Crops in northern Europe and elsewhere failed, likely triggering starvation and disease."

I zeroed in on that 36 degrees F decrease in temperature, because a few days ago, I read an article at The Washington Post about the recent average 2 degrees Centigrade increase in temperatures in the United States - which equates to 3.6 degrees F.  If a drop of less than 4 degrees F caused massive crop failures and famines around the globe, triggering societal collapses in one area after another and roving groups of bandits and invaders looking for food, water and animals - what do you think a 3.6 degrees F rise in temperature on average may do to crop production, local ecosystems and their plants and animal life?

The "disease" the quote above refers to is the plague of Justinian, which killed "tens of millions of people" starting in 541, arguable the worst year of the combined sustained impact of the catastrophic volcanic eruptions in 536 and 540.

This scares the bejesu out of me!  The climate change in the 6th century CE was "mini" (it lasted about 10 years) compared to what we can expect to get worse and deepen from now into the foreseeable future - and beyond that.

If you want to read the articles I did, here they are:

"The Global Cooling Event of the Sixth Century.  Mystery No Longer?"
Dr. Tim Neufield, Princeton University
May 1, 2016
Historical Climatology Blog
(This is the first article I read about the period in the 6th century CE called the "Mini-Ice Age."  It can get a little bit technical in places, but not overly so).

"Colossal volcano behind 'mystery' global cooling finally found"
Michael Greshko
August 23, 2019
National Geographic Online
(While this article does not pinpoint the location of the massive volcanic eruption that occurred in 536 CE, it does refer to it.  The article itself is about the eruption in 540 CE and how researchers eventually narrowed the eruption site down to a volcano in Central America).
Posted by Jan at 11:39 AM No comments:

Starting off such a lovely morning here in good ol' Milwaukee, I am greeted by these headlines: 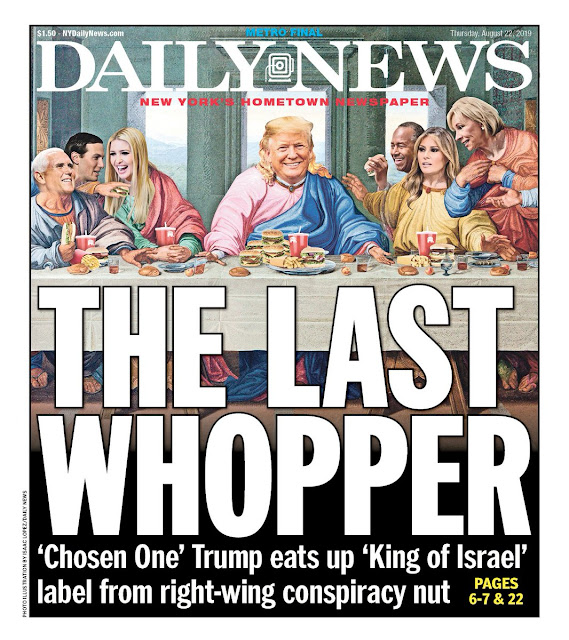 From The New York Daily News.  Oh, and so as not to leave anything out for the fake "Christians" who are willing to be Judases to the faith as long as Trump keeps appointing "conservative" Judges who all hate females, he also parroted a nut case that had been on Fox and Friends earlier in the day and called himself "The Chosen One."

I've been telling my friends and family since he commenced his campaign in 2015 (and never stopped) that Trump is the Antichrist.  I believe it.  Just wait - it WILL get worse.  Every time you think he's gone off the cliff, he does something even worse.  Remember - this is the man that some of  YOU voted for, and he has control over the "nuclear football."
Posted by Jan at 7:06 AM No comments:

Labels: Antichrist, the Chosen One

4,000 Year Old "Hounds and Jackals" Board Found Carved into Rock Shelter in Azerjaiban

Late reporting this - that's what I get for not going through my "emails to myself" which is what I do when I find something I want to post here.  Doesn't work if I don't do it!


4,000-Year-Old Game Board Carved into the Earth Shows How Nomads Had Fun

A pattern of small holes cut into the floor of an ancient rock shelter in Azerbaijan shows that one of the world's most ancient board games was played there by nomadic herders around 4,000 years ago, according to an archaeologist who has investigated the find.
Walter Crist, a research associate with the American Museum of Natural History in New York, visited the rock shelter in a national park in Azerbaijan last year, searching for traces of the ancient game now known as "58 Holes."
The game is also sometimes called "Hounds and Jackals." British archaeologist Howard Carter found a game set with playing pieces fashioned like those animals in the tomb of the ancient Egyptian Pharaoh Amenemhat IV, who lived in the 18th century B.C.
The distinctive pattern of round pits scored in the rock of the shelter in Azerbaijan came from that same game, Crist told Live Science. But the Azerbaijan version may be even older than the game set found in the pharaoh's tomb.
Evidence from rock drawings near this shelter suggested that it dated to the second millennium B.C., or about 4,000 years ago, when that part of Azerbaijan was populated by nomadic cattle herders, he said.
At that time, the game was widespread across the ancient Middle East, including Egypt, Mesopotamia and Anatolia, he said.
"It suddenly appears everywhere at the same time," Crist said. "Right now, the oldest one is from Egypt, but it's not by very much. So, it could just be because we haven't found it from somewhere else older. So, it seems to [have] spread really quickly."
Crist was looking for the remains of another copy of 58 Holes or Hounds and Jackals that he had seen in a photograph in a magazine from Azerbaijan.
But after arranging to fly there, he learned a new housing development had buried the archaeological site near the country's capital, Baku.
So, Crist investigated other archaeological sites in Azerbaijan, which led him to the Gobustan National Park, a UNESCO World Heritage site in the southwest of the country, which is famed for its ancient rock carvings and drawings.
Archaeologists at the park knew about the holes in the rock shelter, but not that they had been used as a board game.The holes are cut into the rock of the shelter in a distinctive pattern that shows how they were used, Crist said. "There is no doubt in my mind — the games played for about 1,500 years, and very regular in the way that it's laid out," Crist said.
Though the rules of 58 Holes are unknown, many think it was played a bit like modern backgammon, with counters, such as seeds or stones, moved around the board until they reached a goal.
"It is two rows in the middle and holes that arch around outside, and it's always the fifth, 10th, 15th and 20th holes that are marked in some way," Crist said of the pattern cut into the rock shelter. "And the hole on the top is a little bit larger than the other ones, and that's usually what people think of as the goal or the endpoint of the game."
Players may have used dice or casting sticks to regulate the movement of counters on the board, but so far, no dice have been found with any ancient game set of 58 Holes or Hounds and Jackals, he said.
While it has been reported that the game is an ancient ancestor of modern backgammon, Crist rejects that idea — they have some similarities, but backgammon was derived from the much later Roman game Tabula, he said.
The game of 58 Holes is old, but it's not the oldest yet found; the Royal Game of Ur, dating from the third millennium B.C., is older, for example. Crist has also studied the ancient Egyptian board games of Senet and Mehen, which appeared starting around 3000 B.C.

Crist said the use of such ancient games throughout a wide area showed that they were able to cross cultural boundaries. [Photos: Ancient Tomb and Board Game Found in China]
"People are using the games to interact with one another," he said. Games were "kind of a uniquely human thing, kind of an abstraction — moving stones in blank spaces on the ground has no real effect on your daily life, except for the fact that it helps you interact with another person.
"So, a game is a tool for interaction, kind of like language — a shared way of being able to interact with people," Crist said.
He presented his findings at the American Schools of Oriental Research annual meeting in Denver in November.
Posted by Jan at 4:58 PM No comments: