Story at Nature.com
Check out the interactive map and related stories at the linked story.

From invasions and migrations to slavery and trade, history is embroidered with events that led to interactions between previously separate populations — and, in many cases, hanky-panky. By mining genetic data from living people, researchers have now created a historical atlas of instances of such mixing. 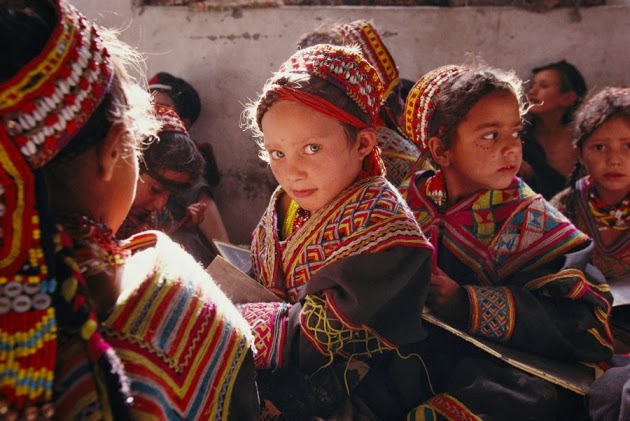 Blue eyes, light hair and fair skin in Pakistan.  Wonder how much she'll be sold for.
Photo credit: James L. Stanfield/National Geographic Creative
Caption:  The Kalash people who live in the Hindu Kush Mountains of modern Pakistan carry genes that probably originated in Europe and might have been carried East by the Macedonian Army of Alexander the Great.

The study, published today in Science1, uses statistical methods to make inferences about which populations interbred, and when, over the past 4,000 years. The findings are also presented as an interactive map. The authors sequenced DNA from 1,490 people from 95 genetically distinct populations around the world, and tested almost 500,000 single-letter variations in DNA known as single nucleotide polymorphisms, or SNPs.

A BRONZE Age grave uncovered in the Highlands has revealed the remains of a woman in her forties who was suffering from toothache before she died 4,000 years ago. [Oh, please!]

Archaeologists from Glasgow-based Guard Archaeology were called in when a cist – a stone burial chest – was inadvertently disturbed by construction workers during landscaping of an access track through Cullaird Wood in West Torbreck, south-west of Inverness.

The team undertook a rescue excavation and found the [that] human remains had been part of a burial.

Osteoarchaeologist Maureen Kilpatrick analysed the bones and discovered that they belonged to a woman aged between 40 and 44.  She said: “As the radiocarbon date demonstrates, this occurred at some point between 1982BC and 1889BC.  Dental disease in the form of periodontal disease and a cyst were present and are probably symptomatic of poor oral hygiene, and are probably secondary to the moderate dental wear observed on most of the teeth.

“Both the right and left femurs appeared quite robust with fairly prominent muscle attachments, suggesting that the individual probably led a physically active lifestyle."

She added: “Preservation of the skeleton was fair with 50 per cent available for study. Much of the right side, which had been in direct contact with the subsoil, had not survived and those bones that had were affected by surface erosion. A single individual was present and was deemed to be of probable female sex based on pelvic and skull morphology.  Unfortunately, height could not be established due to the incomplete state of the surviving long bones.”

Ms Kilpatrick said: “The burial appeared consistent with the early Bronze Age, which was confirmed by the post-excavation analyses.”

The cist is located within an area rich in prehistoric remains, many of which have only been discovered within the past few years, primarily due to development associated with the expansion of Inverness. The area appeared important for prehistoric groups from early times. Ms Kilpatrick added: “Despite the use of cists spanning a period of at least 300 years, many similarities exist such as location, orientation of burial and material used, suggesting that local traditions may have existed which continued over many decades.

“However, each cist is unique in some way and the West Torbreck burial is no exception.  For instance, pottery vessels are not always included in cists. In this case, a beaker found in the West Torbreck cist was evidently part of the burial rites and its function was to accompany the individual to the afterlife.

“Although a few others have been found in north-east Scotland, they are generally rare in Scotland and Britain as a whole. This find gives weight to the importance of the region and its close links with the River Ness, and possibly the North Sea region beyond.”

The area immediately around West Torbreck cist remains relatively rural, with the nearest known archaeological site being the Torbreck stone circle, which lies approximately 200 metres to the east in an area of agricultural land. This small stone circle consists of nine upright stones and two outliers, which are thought to be the remains of an outer circle.

The sides of the recently discovered cist pit were found to be fairly steep and were completely covered with fallen branches, tree stumps and moss.

The information I found most striking in this article is that the Aztecs viewed dogs as "soul guides" -- much like beliefs in the ancient Middle East.  I don't know enough about the culture to say -- I'm wondering now if dogs were closely associated with one or more Aztec goddesses.  In the ancient Middle East, some board game pieces were canines and dogs.  I do not think it is a coincidence.  Dogs (canines) were chosen as game pieces for specific reasons, even if in later ages players did not recognize either the significance or the symbolism involved.

Archaeologists on Friday announced the discovery of "an exceptional" old burial site under an apartment building in Mexico City containing the remains of 12 dogs, animals that had a major religious and symbolic significance to the Aztec peoples of central Mexico.
Previously, the remains of dogs have been found accompanying human remains or as part of offerings, experts with Mexico's National Institute of Anthropology and History, or INAH, said in a statement. But this is the first time a group of dogs has been found buried together at one site.
"This is definitely a special finding because of the number of dogs and because we have found no connection to a building or with the deceased," said archaeologist Rocio Morales Sanchez.
Aztecs believed dogs could guide human souls into a new life after death on earth, and could guard pyramids and other monuments when buried under them.
The dogs were buried at around the same time in a small pit between 1350 a 1520 A.D., the heyday of the Aztec empire. The team of archaeologists determined when the dogs were buried through ceramics and other items found in nearby pits under the apartment building in the populous Mexico City borough of Aztacapozalco, Sanchez Morales said.
Michael E. Smith, an anthropology professor at Arizona State University who was not involved in the project, said the discovery is important because it is the first such find. "This is not the first time a burial of a dog has been found, but it is the first find where many dogs were carefully buried together, in a setting that is like a cemetery," Smith said.
Morales Sanchez said they will need to dig deeper to see if there are other items that could help them find out why the animals were buried in that area.
Smith said it will be important to see the results of the analysis of the bones.  "That work will tell us about the breed of these dogs, and it may tell us how they were killed," he said. "The full significance of the finds is rarely obvious at time of excavation; the analysis will give the full story."
Archaeologist Antonio Zamora, who works at the excavation site, said a biologist told the team the remains belonged to medium-sized dogs with full sets of teeth, likely common dogs.
Aztecs kept pets Techichi dogs, a breed with short legs believed to be an ancestor of the Chihuahua dog, and Xoloitzcuintlis (shoh-loh-eets-KWEEN'-tlees), whose remains can be identified because of the loss of some of their teeth during adult age.
Posted by Jan at 12:17 PM No comments:

Still so damn cold and horrid here in Milwaukee that I think spring will never come.  Supposed we are due for moderating temperatures later in the week, something approaching "normal" for this time of year.  What's that, I wonder?  We've been 20 to 30 degrees F below normal since near the end of November.  It is HORRID here!  I did not sign up to live in Antarctica.

Found this interesting little tidbit this evening.  I don't know if this will work here.