I'm A Sucker For An Injured Baby Squirrel

A few weeks ago we suffered through another nasty cold snap in southeast Wisconsin.  One bitterly cold (windchills below zero F) but bright and sunny afternoon I opened up the patio door to toss out another hand-full of hazel nuts for my tribe of squirrels, who were feeding more than usual in order to keep their bodies fueled against the cold.  There, on the steps leading down to the patio, was a squirrel that did not run away when I opened the door.  I could see it was not one of my "regulars" as it was smaller and darker than my usual tribe members.  It totally ignored me, in fact, like I wasn't even there.

That is when I realized it was either a baby or a sick squirrel, maybe even a blind and deaf squirrel, on his/her last legs.  I would roll a nut right in front of it and it would crawl right over it, like it didn't see it, that's why I thought for several days that it was blind.

It kept showing up in the yard.  It was either very young and injured (young enough not to know that humans can be dangerous and evil and young enough not to instantly recognize a hazel nut) or very old and weak.  It did not move like a squirrel and was unsteady on its feet, so I suspected it might have the "tipping over" disease that I occasionally witnessed in squirrels at the former Maison Newton over the years.

The other squirrels pretty much left it alone.  Thankfully, starting last Saturday the weather turned well above freezing during the day and the snow is slowly melting away. The squirrel came every day and foraged for nuts.  In the afternoon sun last weekend it laid out on top of the fence railing and slept, soaking in healing and warming rays.

And then, yesterday, the squirrel did not appear.  I waited all day, looking and looking, but did not see it at all.

I thought it must have died, and my heart broke a little. I know it is the way of nature, but it still hurts.

I checked for sight of him again this morning first thing, but did not see him.  He has a distinct way of moving, and I did not see him among the other squirrels.

But a short while ago I looked up from the kitchen table out the patio door and there he was, sitting on top of the snow where the bird seed lands and the sun has not yet melted through the snow to the concrete below, eating the sunflower seeds in the bird seed mixture just as fast as he could find them!  Relief - and gratitude that he is still alive.

I grabbed my camera and managed to get some photos of him.  I tried not to spook him; even the squirrels who are very familiar with me do not like to have their photos taken and will run away if I stand at the open patio door too long. This squirrel seemed oblivious! 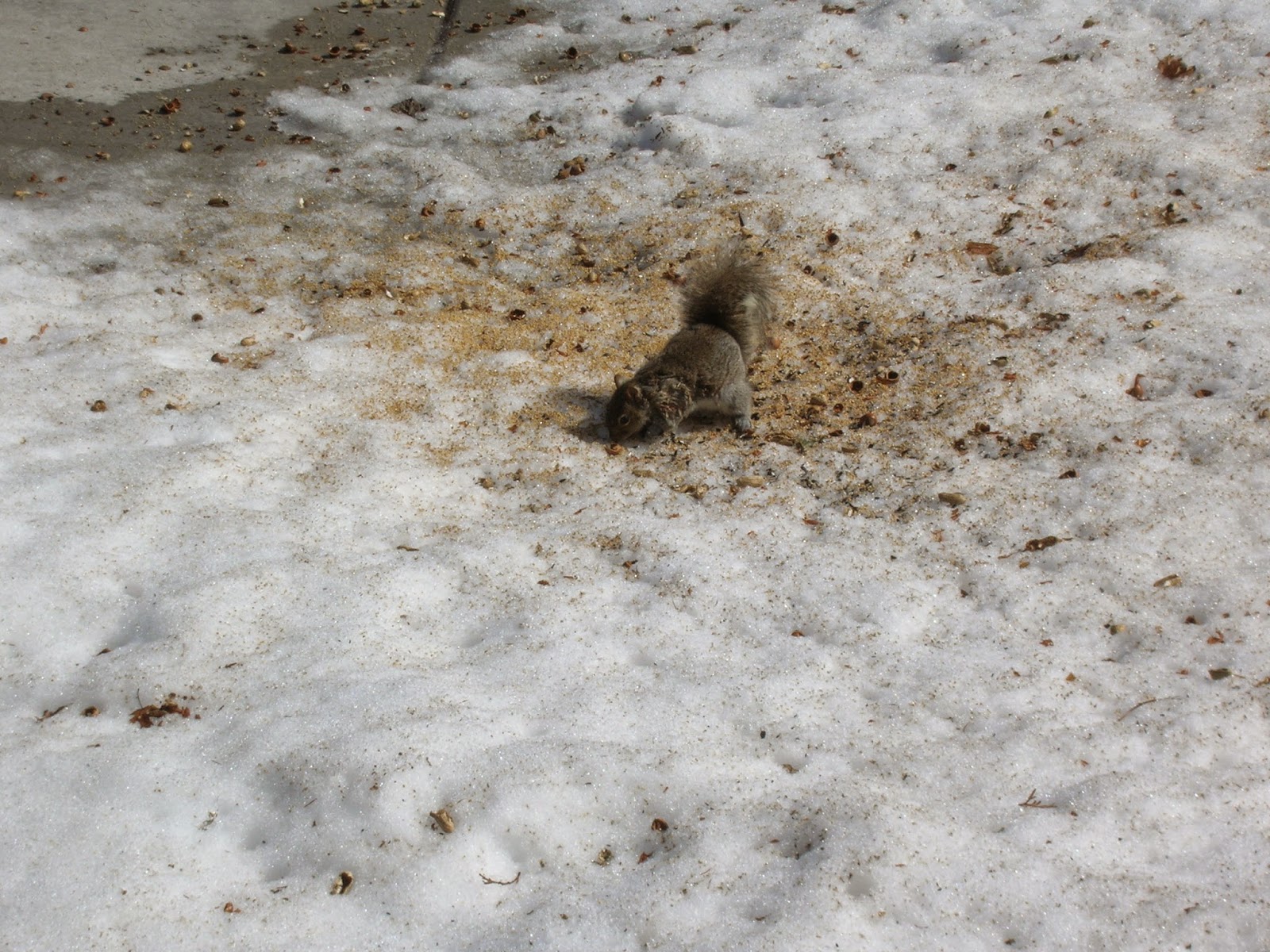 Being able to see the squirrel close-up in the sunlight, I saw that he has an injury on his left leg above his paw, and he is favoring the left front leg/paw, so essentially, he is surviving on two legs and his right leg/paw!  In the photo above, you can see the left paw looks shriveled.  You can see the area above the shrunken paw has matted fur and while it is not possible to tell from the photo, I could see that he must have either been hit by a car or had a run in with a predator but managed to escape.  The skin had been broken and he is missing a patch of fur.

Brave little guy, and thank Goddess he found sanctuary in my yard.  I don't know where he was yesterday, I'm just happy he found his way back today, and has been busy eating the additional peanuts and hazelnuts I've been tossing out to him, which he now recognizes as food!

He is moving MUCH better today -- he is moving around more like a normal squirrel (getting strength back?), so the warmer weather, the sun, and probably the food he's getting enough of here are, I hope, putting him on the path toward a full recovery. 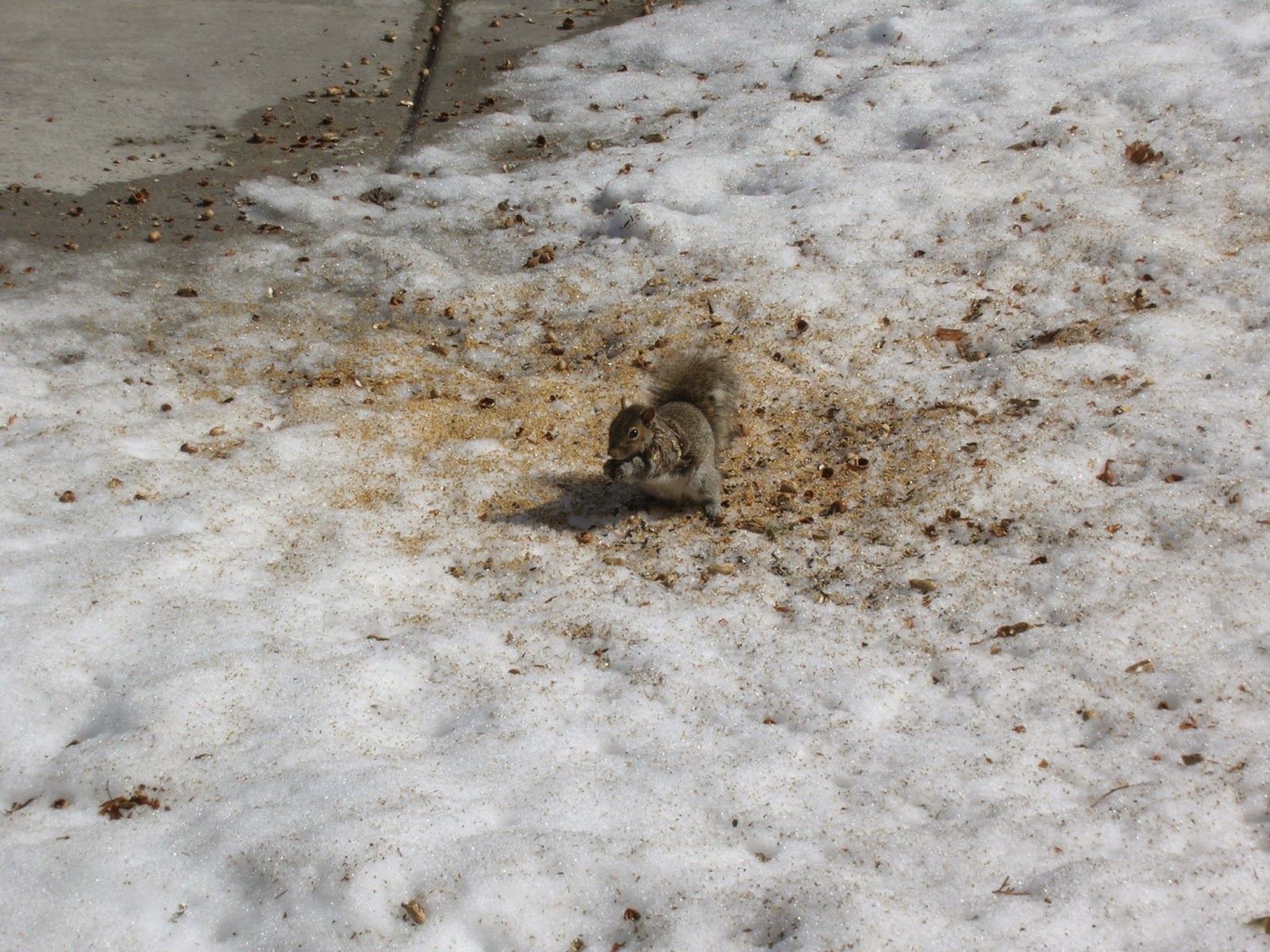 By being able to observe him this close-up, I could see that he favored the left leg/paw.  The photo above was the next one I quickly snapped in the sequence -- you can see the damage to his upper left side above his paw area.  But, look - he's getting chubby!  When he first appeared he was so wizened and thin.  See all of the snow still left on my patio area -- and even more snow in the front yard that faces west and the sun not yet high enough up in the sky to reach it with melting sunshine.  If the weather does hold for two full weeks as forecast, I hope ALL of this snow will be gone!

As the snow has been slowly melting I've been going out with my broom to sweep up the nutshells freed from the ice and snow cover -- feeding squirrels leads to rather a big mess on one's patio! 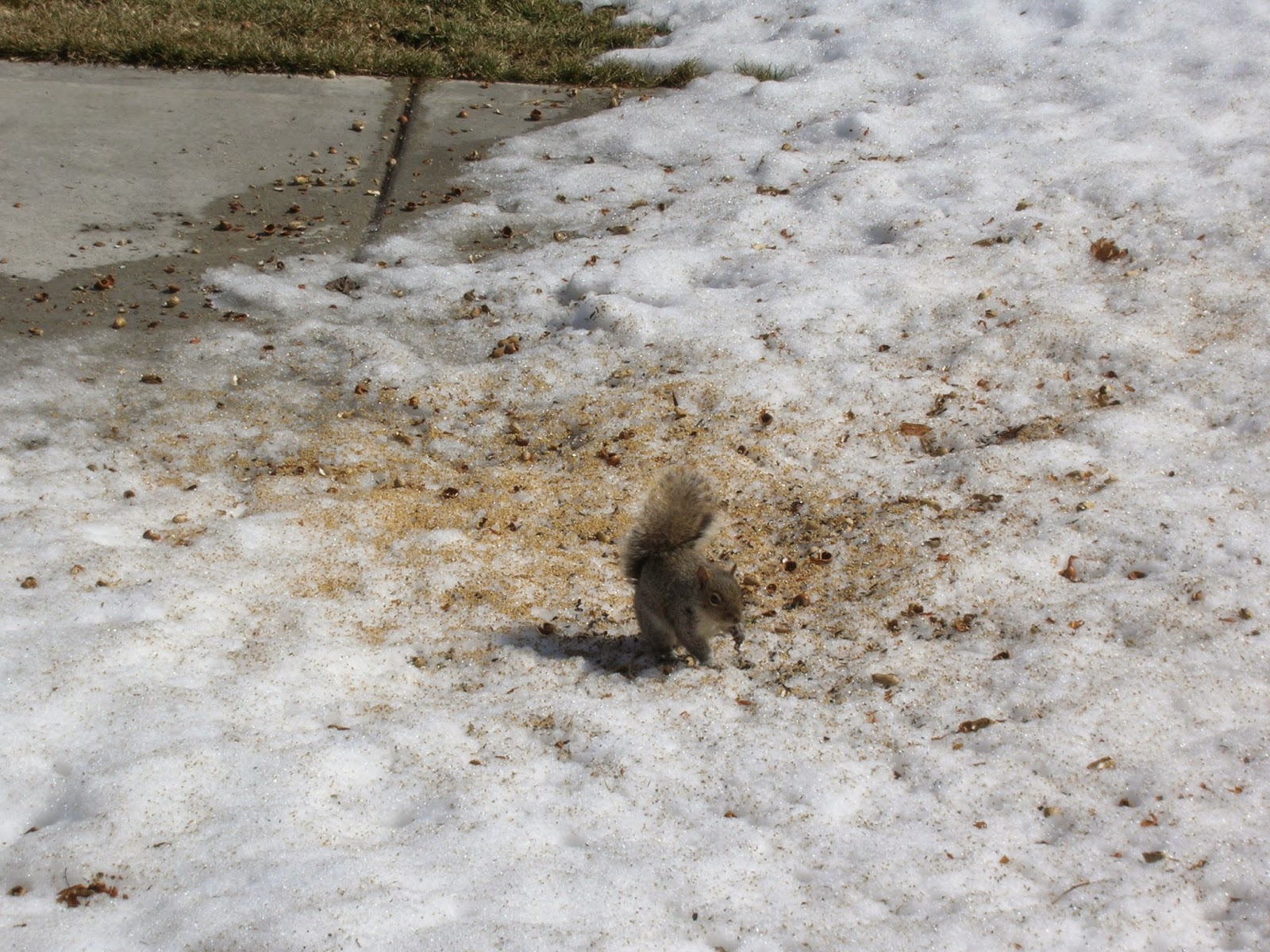 In the photo above, you can see the difference between the size of the healthy right front leg and paw and the left side.  Isn't he cute, my little gimpy squirrel.  I hope he heals and survives. 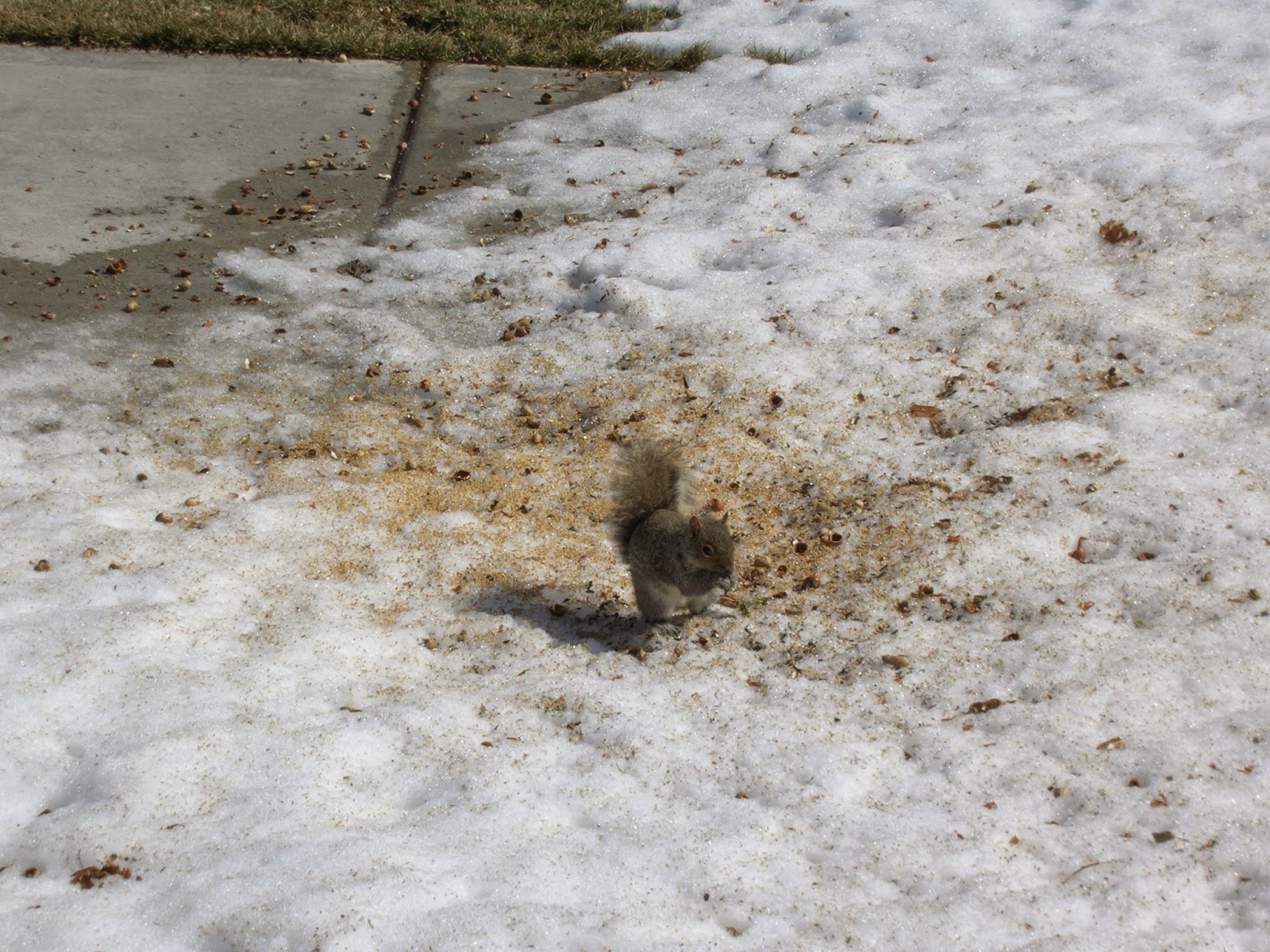