Veterans' Day: The Story Behind An Old Grave

Hola everyone.  A serious family illness situation has been occupying my time and sucking up most of my energy for some time now.  But I wanted to post this in honor of our veterans, those living and those who are no longer with us.

On a lovely autumn day about six weeks ago (it's hard to keep track of the time these days, they all seem to blend into each other in non-ending exhaustion, duty and worry) I met a couple of friends whom I used to work with years ago, and we had lunch.  Afterwards, one of the friends and I took a ride to the Veterans' cemetery at Wood (Milwaukee, Wisconsin) where her father, a WWII vet, and her mother, are buried.

It is a beautiful, serene and tranquil place in the midst of a busy city, unfortunately intersected by an eight lane expressway that goes right past Miller Park (baseball park)!  But even that monstrosity cannot disrupt the peace one feels amid the acres of carefully tended grass, trimmed around the gravestones, and trees turning reds, yellows, and oranges against a cloudless bright crisp blue sky.

My friend showed me her parents' graves, and we paid homage.  Then we took a slow walk through the neatly arranged rows of gravestones, lined up like soldiers in formation.  It was truly moving.  We stopped along our way to read the names on the stones.  Some stones were so worn we could no longer make out any details.  I learned that the Veterans Administration does have a program to replace worn out gravestones with new ones, but due to budget cuts much of that program has been ground to a halt.  How sad!

One gravestone, in particular, caught my attention.  My friend snapped a few photos of it with her cell phone: 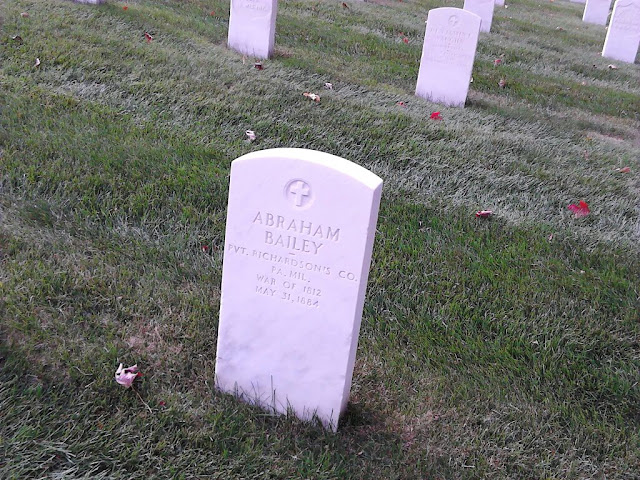 This is the grave of Private Abraham Bailey, who served in Captain William Richardson's Co. of the Pennsylvania Militia in the War of 1812.  He died on May 31, 1884.

We wondered:  What was a man who served in the Pennsylvania Militia doing buried in a Veterans' cemetery in Milwaukee, Wisconsin?  Had he moved here after the War of 1812, perhaps when Wisconsin was a newly opened territory, or perhaps when Wisconsin became a state in 1848?  The mystery intrigued us.  Who was this man, buried in the oldest grave in this section (at least of the stones we could read).

We talked about checking to see if we could find out more.  Both of us have accounts at Ancestry.com.  So, after I go home, I got to work.  Later my friend and I emailed back and forth to share our findings.

This is what we learned about Abraham Bailey, who served in the War of 1812 on behalf of the United States.

Abraham (also known as Abram B.) Bailey, was born on March 30, 1795 (or 1796) in Pennsylvania, where he lived for most of his life before relocating, near the end of his long life, to the Veterans' Home and Hospital at Wood, Wisconsin, in 1882.  He died at Wood at the age of 88 years, and he was buried there.

Abraham served in the Pennsylvania Militia between September 18, 1814 to December 15, 1814, when the war ended.  Before and after the war, he made his living as a stone mason.

On September 20, 1837 in Delaware County, Pennsylvania, Abraham married Martha Gaskill Seaman, the daughter of Theophila Gaskill and Nathaniel Seaman.  Martha was born in Pennsylvania (or possibly in New York), on September 7, 1801 and she died on December 22, 1881.

At some point after 1850 or 1855, Abraham received a warrant from the U.S. Government for "bounty land" as a result of his service in the War of 1812.  I don't know where the land was located, but it appears, judging from the notation in the upper right hand corner on the document below, that he received rights to 160 acres: 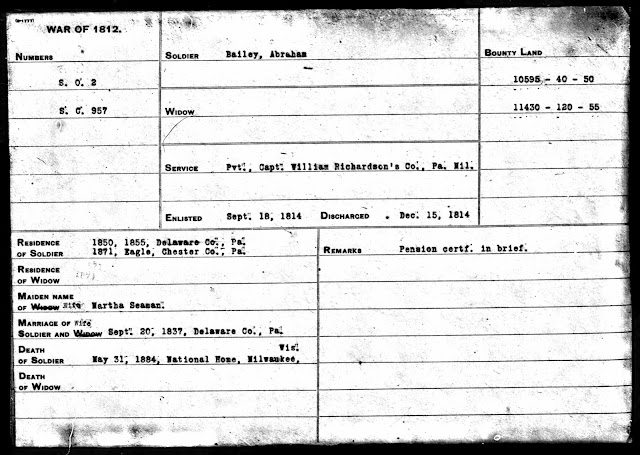 Bounty land was typically land in "the public domain" which at the time meant territory in lands acquired by the United States government for settlement and expansion, such as the Louisiana Territory.  For example, some 5 million acres were set aside as bounty land in Illinois territory before it became a state.  It doesn't appear that Abraham Bailey moved to begin a new homestead on his bounty land; more likely, he sold his land warrant for cash to either an outright purchaser or a land speculator.

I found the couple in the United States Census Records for 1850 (Delaware County, PA), 1860 (Chester County, PA), 1870 (Chester County, PA) and 1880 (Burlington County, NJ).  No children were listed on any of these census records.  Martha and Abraham had no children as far as I was able to determine.  I could find no records but that does not prove there were no children born to the couple, who may have been born but died in the times between the U.S. Censuses.

We know these few bare facts, but we know nothing of the man, the woman, the couple, their lives together.  What did they look like?  What were they like?  Were they happy?

Abraham Bailey's record from the Veterans' Home and Hospital is on the right.  A life reduced to a few sentences: 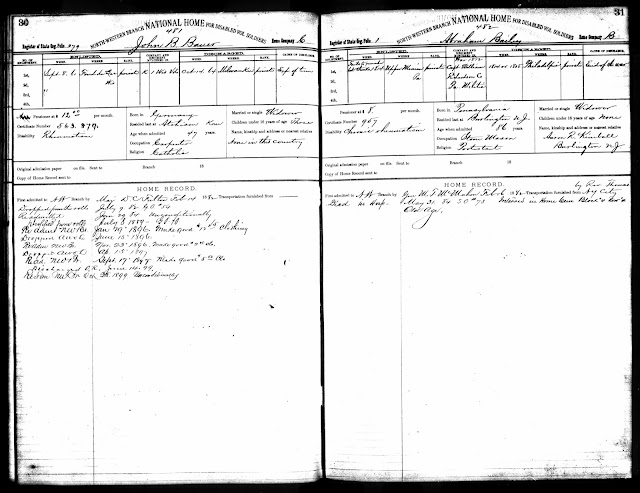 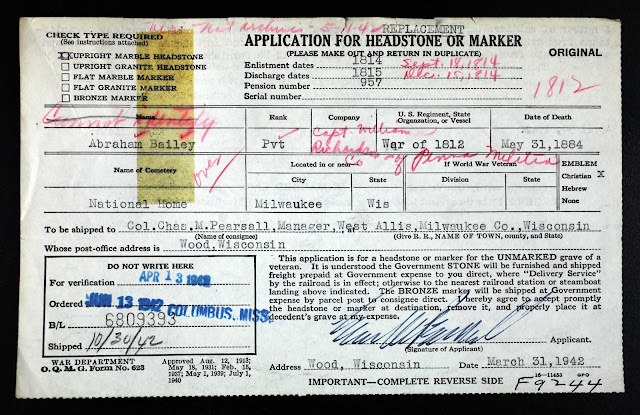 In the midst of WWII, Abraham Bailey's gravestone at Wood was replaced in 1942 - the document above is the replacement request.

Private Abraham Bailey, on behalf of a grateful nation, my friend Ann and I salute you, and all those who served and are serving their country. Thank you.
Posted by Jan at 12:45 PM No comments: