Trump Buried Under His Own Covfefe

Oh my my my my.  Well, my poor fellow Americans, whatever your political persuasion may be, one thing is certain.  Covfefe will forever go down in history as the code doomsday word issued forth from the tweeting idiot in the White House laughingly referred to in the greater world as the *president of the United States of America.  Sad.  Bigly.

I try to refrain from turning Goddesschess into too overtly a political venting outlet for my boo-hiss LIBERAL ways for which I shall no doubt burn in Hell forever and ever, and never be one of the seventy Virgins in Paradise, but this was just too deliciously hilarious to pass up.  Truly, Orange One has outdone himself this time.

"'[A]fter Mrs. Clinton at a public appearance said she suspected collusion with the Russians and joked that “covfefe” was a secret code to Moscow, Mr. Trump fired back on Twitter: “Crooked Hillary Clinton now blames everybody but herself, refuses to say she was a terrible candidate.” She responded with her own tweet: “People in covfefe houses shouldn’t throw covfefe.'”

Child Brides - In the United States

OMGoddess!  I thought my eyeballs were going to fall out while reading this article.  I figured many states in the backwards south, still stuck in the early part of the 1700s, would allow "underage" marriage (legal child rape) - but I was shocked and appalled by the sheer number of marriages in the United States of girls as young as 11 - forced marriages to avoid statutory rape charges by adult males and backwards, ignorant  and/or "religious" alleged adults who are "parents" of these children being forced into an unwanted rape relationship. DISGUSTING.

11 Years Old, a Mom, and Pushed to Marry Her Rapist in Florida

When she was a scrawny 11-year-old, Sherry Johnson found out one day that she was about to be married to a 20-year-old member of her church who had raped her.

"It was forced on me,” she recalls. She had become pregnant, she says, and child welfare authorities were investigating — so her family and church officials decided the simplest way to avoid a messy criminal case was to organize a wedding.

"My mom asked me if I wanted to get married, and I said, ‘I don’t know, what is marriage, how do I act like a wife?’” Johnson remembers today, many years later. “She said, ‘Well, I guess you’re just going to get married.’"

So she was. A government clerk in Tampa, Fla., refused to marry an 11-year-old, even though this was legal in the state, so the wedding party went to nearby Pinellas County, where the clerk issued a marriage license. The license (which I’ve examined) lists her birth date, so officials were aware of her age.

Not surprisingly, the marriage didn’t work out — two-thirds of marriages of underage girls don’t last, one study found — but it did interrupt Johnson’s attendance at elementary school. Today she is campaigning for a state law to curb underage marriages, part of a nationwide movement to end child marriage in America. Meanwhile, children 16 and under are still being married in Florida at a rate of one every few days.

You’re thinking: “Child marriage? That’s what happens in Bangladesh or Tanzania, not America!" 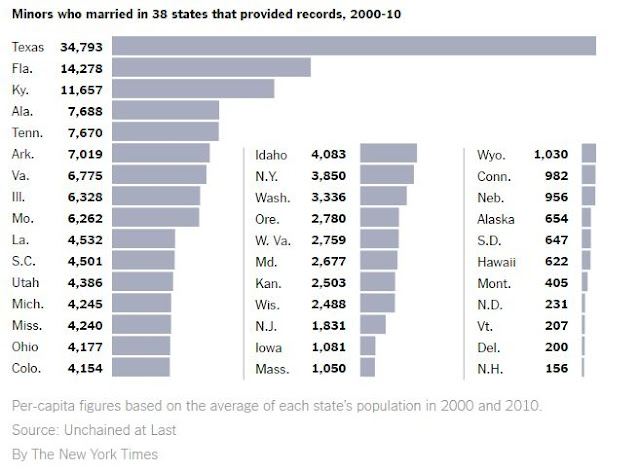 In fact, more than 167,000 young people age 17 and under married in 38 states between 2000 and 2010, according to a search of available marriage license data by a group called Unchained at Last, which aims to ban child marriage. The search turned up cases of 12-year-old girls married in Alaska, Louisiana and South Carolina, while other states simply had categories of “14 and younger."