Katherine Neville (Author of "The Eight") on the Autumn Equinox

Hola darlings!  I hope everyone is staying safe and sound during this awful time in our history.  I have been more of a homebody since retiring at the beginning of 2015, but now I can't even take my couple of trips a year - too afraid to travel for fear of getting infected with COVID-19.

I've always been pretty darn cautious and perhaps over-analytical at times, but now, I'm downright paranoid about staying as safe as I can.  My ventures out these days are limited to the supermarket and talking to neighbors from a distance of 6 feet or more - outside only.  I wonder if I'll see as many of them in the depths of winter when it's 20 below.  Can one still do yard work in the winter??? Other than shovelling snow, of course.  Maybe I'll keep my exercise up this winter by shovelling my way around the block...

Katherine Neville has sent her quarterly email letter to fans of hers who sign up at her website (katherineneville.com).

Here is the introduction to her Autumn Equinox Newsletter 2020:

Flux, indeed!  Ha.  I think I need to pull out "The Magic Circle" and read it a second time, perhaps I missed something the first time around, admittedly years ago.  Perhaps it could give me some comfort while we wait out this pandemic, the economic destruction it has wrought and waiting for the Fascists in the party formerly known as Republicans to drop dead or be kicked out of office by we, the people, whichever comes first.
I keep telling myself "this too, shall pass."  And I know it will.  But for far too many, they will pass away to the Happy Hunting Groundes and never see the end to this horror movie.  I may too, although I really really really want to live long enough to spit on Donald J. Trump's grave - if the family is stupid enough to disclose his burial location when he finally does croak.
I am worried about my country, the people in it, and everybody else all around the world.  Most people do not WANT or NEED Fascist dictators to tell them what to do, what to think and how to act (grovel at their stinking feet, of course).  But here in the United States, that what we've got - a traitorous fraud masquerading as a human being living in the White House, and other countries have been taken over by the same kind of vicious, selfish, murderous and monstrous mentality.
Neville wasn't kidding when she called her 2017 Autumnal Equinox post prescient.  We most certainly are in "flux" in all ways - the environment, the climate, mass extinctions of animals and humans soon to follow (due to mass starvation as well as world-sweeping pandemics, we ain't seen nothing yet), natural disasters of unimaginable scope, collapsing economies inflicting utter destitution, homelessness, starvation and death on billions, collapsing governing institutions all around the world, and the Fascist world of "1984," Hitler's Germany, Stalin's and Putin's Russia, China, again rearing its vile/evil head in countries that people used to consider sane, the list is endless. Notice that vile and evil are anagrams of each other, how fitting.
And here I sit, typing away, in between running outside every 30 minutes to move the hose around the back yard lawn and garden beds.  And now I'm going to move my computer out to my Shezebo because it's above 75 out and lovely, warm and dry enough to be easily breathable, despite the haze in the sky (smoke way up in the whatever-sphere from the wildfires out west, visiting us and Europe via the Jet Stream).  Talk about cognitive dissonance, Holy Hathor!  I will pour myself a glass of cheap pink (out of the box) wine and settle in for a few hours of reading with my feet up on a hassock. 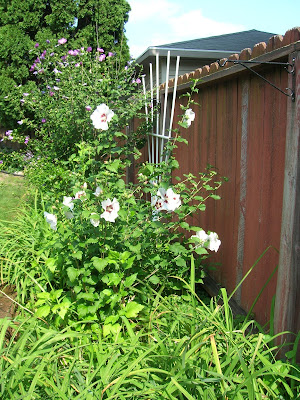 Celebrate the Autumn Equinox, start stocking up for the winter, it's going to be a tough one and I'm not only talking about the weather.  Thinking of you all, darlings, worried for you and the entire world.  But as the beautiful blooms on this Rose of Sharon attests, I thought it was a goner for sure after the two hard freezes we had in April after everything had thawed and the snow was finished (so we thought).  It looked - and felt - dead.  I waited and waited and waited for it to show some sign, any sign, of life.  I would carefully snip off branches looking for green underneath the bark.  Nope.  Looked for any sign of leaf buds forming in June.  Nope.  Toward the end of July, when I'd finally decided that the sad ghost of what used to be a lovely shrub should be hacked up and dug out of the garden bed, she started showing life - barely enough to justify keeping her, but keep her I did.  And this photo was taken about 30 minutes ago.  She gives me the most beautiful flowers pure white, large, with a deep burgundy center and a bright golden yellow stamen.  During these desperate times, she came through again.  We will survive.  We will - persevere.
Posted by Jan at 1:57 PM No comments: