I thought this was interesting.  My first thought was that perhaps the tomb was occupied by persons closely related to the Tocharians either by kinship or by trade.

The photos above are from Archaeology News Network.  Here is the Xinhua article:

YINCHUAN, Dec. 15 (Xinhua) -- A rare well-preserved marble sphinx carving has been unearthed in a tomb in northwest China dating back more than 1,000 years, said Chinese archeologists on Tuesday.
The delicately-carved sphinx statue is 36 cm high with 21 cm long and 13 cm wide base. It has a human face with a bulge on the head and a sitting lion body.
The sphinx statue was excavated in November along with eight warrior, horse, camel and lion carvings in the tomb in Guyuan City, Ningxi Hui Autonomous Region.
The tomb was one of the 29 ancient graves in the area which archeologists have excavated this year to pave way for the construction of a local water plant. More than 150 funeral items, such as carvings, pottery, bronze and iron wares, have been unearthed from the graves so far.
The sphinx statue, made of white marble according to preliminary research, was intact except for minor damage in the middle of the face.
These nine marble carvings showed excellent craftsmanship, said Fan Jun, head of the excavation team of the Ningxia Cultural Relics and Archaeology Institute.
According to an epitaph, the tomb housed Liu Jun and his wife, who lived during the Tang Dynasty (618-907).

"The style carvings had features from the west and are considered rare for ancient Chinese tombs during that period," said Fan. The white marble material was also rarely seen in north China, he added.

The excavations will help scientists better understand freight transport during the Tang Dynasty, said Fan.
Ningxia was along the ancient Silk Road trade route.
The original half-human, half-lion Sphinx, is believed to have been built by Egyptians 5,000 years ago. The statue is 73 meters long and 21 meters high. It sits on the west bank of the Nile River near the great pyramids of Giza to the west of Cairo.
Posted by Jan at 4:00 PM No comments:

Okay, is it just me being overly suspicious because right now on the History Channel is a TV series about treasure hunting on Oak Island in Nova Scotia - treasure that has been variously ascribed to the Templars, pirates, the Spanish Conquistadors, and in last week's episode, the Aztecs!  Now, lo and behold, a Roman sword discovered an unspecified number of years ago has been brought to light by an heir of the alleged original finder.  Hmmm.....  Aha!  I knew it!  After posting the above I found this article that announces the discovery of the "Roman sword" is explicitly linked to the show about Oak Island currently being run on The History  Channel.

6 hours ago
An ancient sword found in water near Oak Island in Nova Scotia offers proof the Romans found America, a researcher has claimed.  If true, the sword - found by fishermen in shallow waters - would rewrite history, with Roman explorers having found America a millennia before Columbus.
Investigator J Hutton Pulitzer claims the sword is a ‘smoking gun’ - although many archaeologists are not as convinced.  Pulitzer says, ‘Some years ago, a man and his son were scalloping off Oak Island, which sees them hang rake-like object off the back of their boat. When they brought this up, the sword came up with it.
‘The father kept it for decades, and when he died it went to his wife, then his daughter. Then when she died many years later it went to her husband. It was he who came forward to the island and said ‘I think you should know about this and where it was found.’
Pulitzer claims that forensic analysis of the sword shows that it is Roman - and rubbishes claims that it was brought there by later visitors.
He now wants to explore what he claims is a Roman shipwreck in the same waters.
Pulitzer says, ‘The shipwreck is still there and has not been worked. We have scanned it, we know exactly where it lays, but it will be a touchy thing for the Nova Scotia government to allow an archaeological team to survey it. We know beyond a shadow of a doubt that it is Roman.
‘I think this is the single most important discovery for the Americas - an event that will re-write history. This is a gunshot to be heard around the world. It changes all of our history on this side of the pond.’***************************************************************************************************************
Aha!  I knew it!  After posting the above I found this article that says the discovery of the "Roman sword" is explicitly linked to the show about Oak Island currently being run on The History  Channel.  This photo of the alleged Roman sword superimposed over an air shot of Oak Island is from that article: 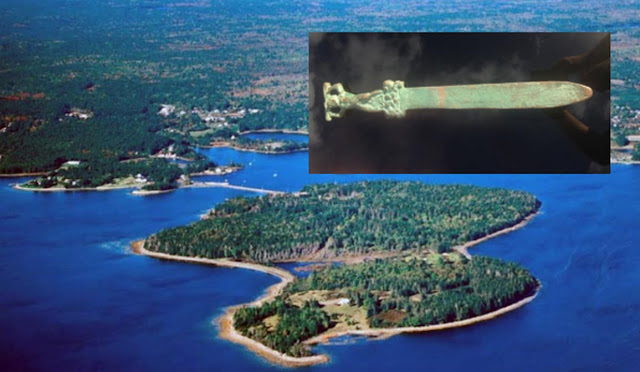 I have been watching the show.  The originators of the show are milking it for all it's worth, and I can't blame them, really, since I imagine it has been very expensive bringing in all the digging equipment and technical people they've had going over the island with a fine tooth comb trying to find ANY evidence of treasure.  I don't think there is diddly squat buried there, but it does make for a rip-roaring good review of history :)
Some folks have suggested that Oak Island is shaped like an elephant: 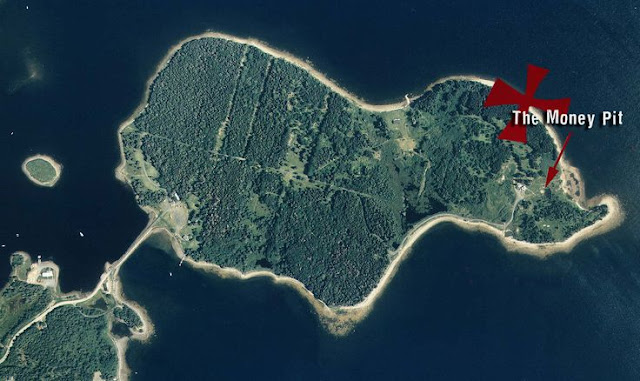 Hmmm, well maybe a pygmy elephant with no hind legs.