Happy Holidays to all!  For those of you who want to see this year's Christmas tree and skip all the blah blah blah, drop down to the end of the post.

It has been bitterly cold here -- we are under one of those nasty Polar Vortexes and we have had about 16" of snow over a span of 9 days.  Today blossomed less cold but extremely windy.  So windy that gigantic drifts are forming everywhere on the streets, in my driveway, on my sidewalk, and on everyone else's too, and there isn't a thing we can do about it until the winds die down.  That may be on Thursday. Windchills today were hovering around 10 below zero F to zero F, and it felt positively balmy outside compared to the past three days when windchills were 20 to 30 below zero F.  We are running about 29 degrees F below normal temperatures for this time of year.  I dread to think what January and February (always the worst two months of winter) will bring - weatherwise and otherwise.

Not to be outdone by Mother Nature, Father Time and History is throwing up all kinds of vomit (literally) all over the world the past several months, and 2017 promises to continue the unabated horrors.  St. Januarius's miracle blood refused to liquify on December 16th this year.  No bueno.  When this has happened in the past, BAD THINGS have happened.  Now this could not possibly be connected to the U.S. gone mad election of that man who is NOT my dictator, could it...


One of the most famous recurring miracles — even if one not quite sanctioned by the Catholic Church — is the liquefaction of the dried blood of San Gennaro, or St. Januarius, a bishop of Naples martyred around 305 A.D. and the city's patron saint. Starting in 1389, the vial of San Gennaro's blood typically turns liquid three times a year: on the Saturday before the first Sunday of May; on his saint's feast day, Sept. 19; and on Dec. 16, the day Mt. Vesuvius erupted in 1631. The blood liquefied on Sept. 19 this year, but not on Dec. 16. "In local lore, the failure of the blood to liquefy signals war, famine, disease, or other disaster," Catholic News Agency reports.

The relic failed to liquefy in September 1939, when World War II broke out; during a cholera outbreak in Naples in 1973; and in 1980, the year of a deadly earthquake, Italy's La Stampa newspaper says. But Msgr. Vincenzo De Gregorio, the abbott of the Chapel of the Treasure of San Gennaro, took a philosophical view. "We must not think of disasters and calamities," he counseled, according to the ANSA news agency. "We are men of faith and we must pray." Peter Weber

Well, I've been praying my butt off for months to the Great Mother Goddess for a miracle to get rid of Herr Hitler Donald Trump a/k/a the Antichrist before he manages to start WWIII and the Zombie Apocalypse by doing something - anything - to strike him down and, preferably, Mike Pence too, all in one fell swoop.  I keep hoping for reports of miracle lightning bolts appearing out of the sky to strike them down.  But nope - nothing yet.  So -- it looks like we are going to suffer through some dire visitation from Fate during 2017, unless the Great Mother intervenes.

Here is this year's Christmas tree.  Not my best effort, heart just is not in it this year.  Talk to y'all after the holidays - maybe. 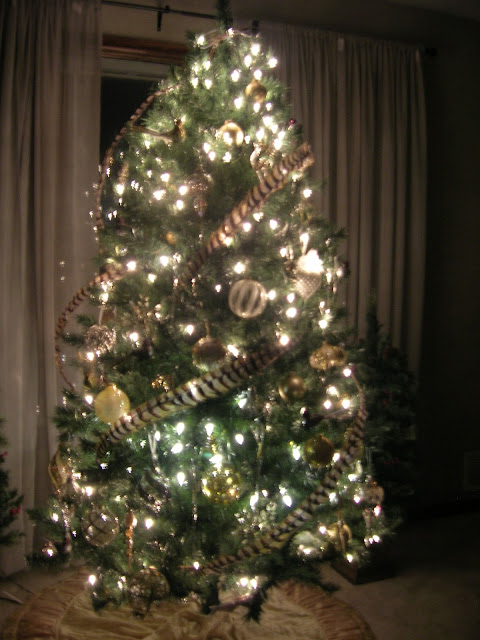