I've been pounding away on my ginormous family tree, trying to clean up various things, adding things, trying to figure out a logical way to begin to print off, scan and email its contents to awaiting relatives, and not thinking about the Goddesschess blog at all (don't worry, we are still providing funding for various chess femmes in events and 2016 will see five such events).

While digging around on my now antique but trusty Toshiba laptop with Vista installed on it (which I do NOT want to give up but support is going to end for the Vista operating system next year some time - those Microsoft BASTARDS!) in my photos searching for a family portrait of one of my paternal great-uncles (couldn't find the damn thing to save my life),  I happened upon this gorgeous beauty who was next in the row after the last family tree image: 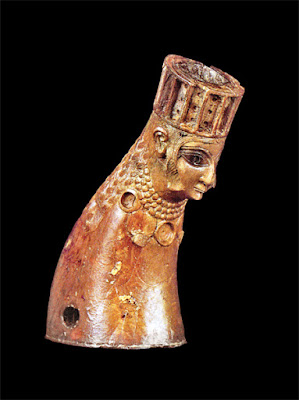 I've got her labeled as "Nimrud Syrian Court Beauty."  But no date on her, no ID information of where I'd copied her from.

Hmmmm.  I checked the properties of the image and found I had saved it on June 25, 2011.  Holy Hathor!  That didn't tell me anything, though, other than I'd saved her nearly five years ago. Try to remember an image I saved 5 years ago - when I cannot remember what the hell I hate for supper last night.  Hmmm, come to think of it, I was so busy doing this and that, I did not eat any supper last night.  No wonder my stomach has been growling relentlessly since 3 a.m.

I wondered where I had found her.  I am pretty sure I saved her because she reminds me of a chess piece!  Could be a Queen, could be a forerunner of the "Vizier" who eventually turned into our mitre-hatted and exclusively male "Bishop."  This image reminds me of another image that, of course - now - I cannot find, it's so old it is probably one of the images I moved from my old Windows XP desktop.  I believe it is now residing on a newer Windows 7 laptop to which I had transferred everything (other than emails) sometime in 2014.  Alas, I subsequently spilled a glass of wine on that Windows 7 Toshiba one day sometime in 2014 and now the keyboard only types backwards when the keys work at all and it is impossible to use it for internet purposes.  I've been intending ever since to take it into a repair place, just have not gotten around to it yet.  It's probably a hopeless cause in any event, and I should just transfer everything from THAT laptop to my current Toshiba laptop that has Windows 10 on it.  I hate that damn Windows 10, though, and so I am hanging back doing any such thing.  Do you think I have attachment issues to "old" operating systems and even older computers?

Back to the image that I can't find:  It is a carving of a goddess with a tower (that looks like a medieval castle tower or keep) upon her head.

I always think of the goddess Car when I think of walls and fortifications, but I do not think the image I recall is a carving of Car.  I believe I found her at an obscure archaeology magazine website whose url I cannot recall.  I will probably find her 10 years from now somewhere in the thousands of images I have stored on my various computers when none of this really matters anymore, because people will have figured out by then for themselves that Chess Is The Game Of The Goddess after mucho new archaeological discoveries and several fresh looks at existing evidence and archaeological finds leads to that inevitable conclusion.

Okay, I can see this post is going to turn into one of my semi-epic journeys into JanXena's Twilight Zone, so get yourself a bottle of wine and a big bowl of munchies and settle in.

Back to attempting to write the meat of this post:  Had I written a post about the Nimrud ivory court beauty pictured above and that was why she was among my saved photos?  I don't remember and right now I'm just too damn lazy to try and do a blog search for her.  Instead, I did an online quicky search for "Nimrud Syrian court beauty" - the lazy person's method, LOL!

Lo and behold -- I found not an eurudite and scholarly post written at Goddesschess but a 2011 article from The UK's "Daily Mail" (I confess, it is one of my favorite places to browse).

I'd no idea - but it turns out famous mystery writer Agatha Christie was married at one time to a famous British archaeologist (in archaeological circles, that is), and she used to help him on his digs.  Among them was a dig or digs that took place in Iraq at the ancient site of Nimrud where they uncovered thousands of fragments of small ivory carvings.  Agatha used her cold cream to gently clean them of muck and dirt.  (Does anyone remember's Ponds's Cold Cream?  I do.  Holy Hathor, I'm getting OLD).

I did a quick perusal of the article I discovered online, but I did not see my particular "Syrian ivory court beauty" although there are so many  ivories in a group photo, it would be difficult to pick her out.  At the very end of the article -- I saw two images that are distinctly Egyptian.

So - I think to myself - you are getting older Jan, you could be losing your marbles to senility.  Maybe these are not Egyptian at all: 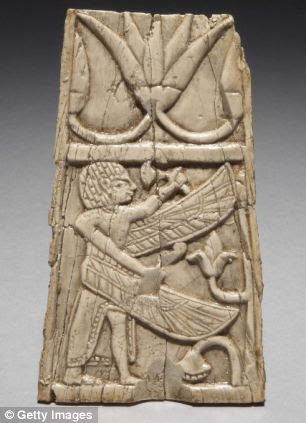 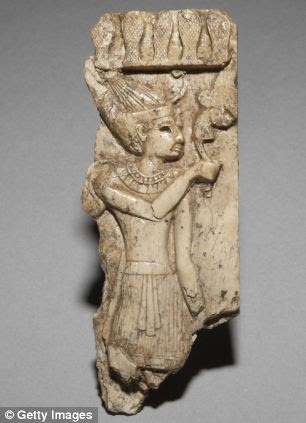 Naaaaah, I assured myself.  Those ivories pictured directly above are definitely Egyptian, NOT Assyrian. The art style, the iconography, cannot be mistaken. They were found in Nimrud and were also sold to the British Museum as part of Agatha Christie's collection of thousands of ivories collected from there. But they are not Assyrian.

The answer lies in the March 8, 2011 article from The Daily Mail.  Cartloads of these ivories (some gold-covered) were hauled to Nimrud as tribute over years and years, and at the time some parts of Egypt or Egypt-centric settlements were included in the Assyrian empire. Sadly for gold treasure hunters, the Babylonians got to the hoards first, and melted off the gold ages ago.  What archaeologists discovered are what was left behind.

She revealed in her autobiography that her face cream was invaluable in cleaning finds on her husband's archaeological digs.

And now some of the 3,000-year-old carved ivory pieces that the author helped preserve will go on show for the first time.

Almost 6,000 pieces have been bought for £1.17million by the British Museum in London.

They were discovered between 1949 and 1963 at Nimrud in what is now northern Iraq, in an excavation led by Sir Max Mallowan, one of Britain's most celebrated archaeologists.

His first wife, murder-mystery writer Christie, was in the excavation team and is known to have help clean and preserve some of the objects.

'I had my own favourite tools; an orange stick, a very fine knitting needle... and a jar of cosmetic face cream for gently coaxing the dirt out of the crevices, ' she wrote in her autobiography published in 1977, the year after her death.

The ancient objects include decorative ivories for use on wooden furniture, as well as fragments of ivories used on horse trappings, statues and decorative boxes.  Most of the pieces, which date from the 9th to the 7th Century BC, would have been covered with gold leaf and inlaid with prized semi-precious stones such as lapis lazuli.  They were discovered in a royal arsenal within Fort Shalmaneser palace in Nimrud, which was once the capital of the Assyrian empire.

The empire covered swathes of the Middle East, including Iraq, Lebanon, Kuwait, Syria and Jordan, even stretching to cover half of modern-day Egypt. [End of article]

Hola everyone.  I received a comment responding to this post but it was directed to a different post than this one.  I am publishing it here:

Musicalbard said...
Hi, I noticed your "Nimrud" artifact and came up with this site for you to check out. http://www.d-alyasmen.com/alhalm/part2/013.htm I hope it helps place and date the artifact for you.
Sincerely
Elizabeth
After at first typing it in wrong and wondering why I could not get the link to work (duh), I corrected the url and was taken to a link with a foreign language article about Gilgamesh.  I vaguely remember something about the epic from high school, but have never read it in full (English translated version).  A picture of my ivory court beauty is used in the article, but without credit or source information so I cannot back-track it.  The epic of Gilgamesh date to approximately 1800 BCE, which would make it quite a bit older than the circa 1000 BCE date for the creation of the Nimrud ivories.  So, I'll need to add this to my list of never-to-be-accomplished research project, learning more about the Nimrud ivories.  Somehow, the ivory court beauty just doesn't seem to be of the same genre as the examples shown in The Daily Mail article.
Posted by Jan at 5:07 PM No comments: