First of all, HAPPY LABOR DAY to all of us who work so hard doing what we do, whether we work inside the home or outside the home - or do both! It's all good, and it's all worth more than we make in pay, for damn sure!

Labor is under attack today in the United States and it's so sad. We're trying to fight back, but we're outgunned and out-moneyed and out-propagandaed.


Don't be fooled by people who are telling you there are "makers" and there are takers," doing the old "speaks with forked tongue" trick! The TRUE MAKERS are the people who create wealth, like me -- working away for the past 45 plus years in an office, now making about $25 an hour compared to my boss's $650 an hour. I work just as hard as he does and, in truth, without the work I do he wouldn't be able to do all that he does. But there is really no such thing as "trickle down," nope. Now I'm not crying the blues here because at my pay rate I gross about $51,000 a year, and I'm okay with that. Is it what a person with a master's degree should be making, though, if we Americans value education like we say we do? Hell no!

But, according to stats from the Congressional Budget Office, I'm considered above the median income in this country, I'm in one of the upper percentiles, darlings, woo woo. How fricking sad is that? Seven years of college education -- and I just scratch the surface of the median income...

Of course, those wages are BEFORE DEDUCTIONS. If only I didn't have to pay 40% of that gross income every year to federal and state taxes and things like Medicare and FICA. Meanwhile, my boss is crying the blues to me because his youngest will soon be going off to college and he "can't afford it." Yeah, right. Tell me about it, dude, who makes TWENTY-SIX TIMES MORE GROSS SALARY THAN I DO. He, his wife and two children can't make a go of it on $650,000.00 a year. And they pay less in taxes than I do. For instance, his Social Security tax deduction is capped at $117,000. The rest of his salary is not taxed for Social Security. I pay Social Security taxes on 100% of my $51,000. How is this fair? And yet he and the rich and even richer are screaming about "high taxes."

The TRUE MAKERS ARE THE LABORERS, not the owners of the property. Property rots and rusts away or, if it is land, goes fallow, without the MAKERS. Take a few minutes and just think about this, please.

My grandfather took a billy club to the head during a strike at J. I. Case in Racine, Wisconsin, standing up for workers' rights in 1934! The then governor of the state of Wisconsin called out the National Guard to attack the strikers. This was in the days before labor had ANY rights at all -- rights that we won after hard-fought battles and are now, less than 100 years later, rapidly losing. Yeah, I hear it every single day, they won't ever do THAT, who would work for them, nobody...

Stupid, stupid people! Think it can't happen to you... 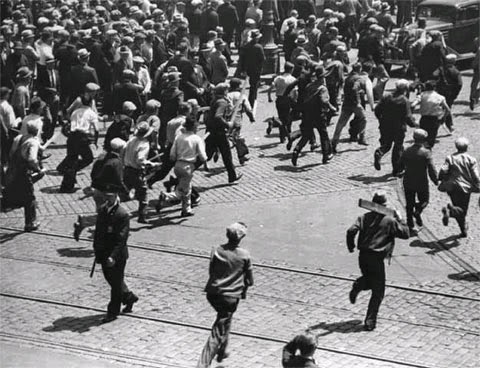 Grandpa Newton lost his job as a skilled tool-and-die maker. The family lost their home to foreclosure because Grandpa was blacklisted and couldn't find work -- not that much work was to be found in those years, anyway. J.I. Case hired scabs who worked for pennies on the dollar compared to the workers they'd fired en masse. Grandpa and his family of eight had to leave Racine and the prosperous middle-class lifestyle they'd known and move to Sturtevant, to what they considered a dumpy little house with a couple acres of land, where they grew fruits and vegetables and eeked out a living doing "truck farming" (as it was known back then) and growing much of their own produce to feed their family. They scraped by.

That was before Wisconsin became one of the first states at the time to pass a law imposing a moratorium on foreclosures during the Great Depression, to prevent people who, through no fault of their own, were losing their homes because they couldn't find work! I don't know this for a fact, but the story I remember hearing as a child and as I understand it now, as an adult, is that the bank owner at the bank that held Grandpa and Grandma Newton's mortgage on the Racine home gave them the option of taking the property out in Sturtevant (back then, nowheresville compared to living in Racine) in exchange for the equity in the Racine home, and Grandpa accepted the deal. That bank owner, he didn't have to do it, but he was a decent man. Back then, a lot of business was done on personal knowledge of the character of one's customers, and on a handshake. My beloved Grandpa was a man of principle. And so was that banker.

All I know is that I loved that house, with its magestic allee of trees alongside the gravel driveway, and the ever-fascinating acreage out back that offered endless hours of exploring and play-time and fantasy. And the family, at that dumpy little house, survived the Great Depression, and Grandma actually sheltered people less fortunate than they were in the basement (the cellar, as they called it back then, which was not then finished in concrete block). She had what was called back then "a soft heart." I inherited mine from her, in more ways than one. It's from Grandma's side of the family, I discovered through my geneological research, that I inherited this genetic lung disease (Pulmonary Arterial Hypertension) that will, ultimately, cause my heart to fail and kill me. Well, we all have to die some time.

Grandma Newton was famous locally for her canned and preserved foods, jams and "goodies" (a form of candied fruit -- I wasn't allowed to eat any because it had brandy in it). Some of my earliest memories are of watching Grandma and Aunts Lolly and Mary Olive (her oldest and second-youngest daughters) working in the teeny kitchen of the only Grandma and Grandpa Newton house I ever knew, and loved. The three of them were moving in what seemed like high speed around a tall butcher block "island" stirring, tasting, seasoning, ladling steaming hot concoctions into mason jars, the room filled with moisture from jars boiling in water and fruits and vegetables cooking on a six-burner stove. I don't remember if it was gas or a wood burner, I assume it was a gas stove, as I was born in 1951 and we're probably talking about 1955 and after. And then there was pickling, done on different days.
The Great Depression didn't end until the start of World World II, when the United States geared up to feed the war effort that was going on in Europe and, ultimately, sucked the USA in, too, including my Dad, who went off to join the Army when he was about 20.

Dad was wounded and awarded a Purple Heart, and suffered severe frost bite to his feet. Those feet of his, they caused him much pain and suffering afterward until the time he died. But back then, a man didn't complain about such things. He was changed in ways no one should ever have to be changed. But he survived. Millions did not.

Oh my. The older I get (I turned 63 on August 19th, sigh), the more these memories become so precious to me. I've no children of my own (THANK GODDESS!), but I am an aunt, and a grand-aunt, and a great-grand aunt. Geez! What will happen to those children of my nieces and nephews?

All those descendants will think it is absolutely normal to work for $5 a hour and not have employer paid-for health insurance, no paid vacation, no paid sick days, no paid maternity leave, no retirement benefits, no profit-sharing, hell no! They will be, ahem cough cough cough, INDEPENDENT CONTRACTORS. Yeah. A fancy name for 21st century slavery. And, because none of the kids now graduating from high school knows any history or knows, really, how to read or write (they think "HOW R U" is writing), they will believe all of this is perfectly normal, and even worse, the way it should be... They will believe that if they're not at the apex of the pyramid, it's because they're stupid, or lazy, or both. Because that is what they are being taught -- they are being brainwashed into believing -- right now, as I write this. There is a reason "1984" is no longer mandatory reading in high school...

Do you REALLY wonder why Congress has done nothing about the epidemic of illegal aliens flooding into our country? Darlings, they're CHEAP LABOR. That's the ultimate bottom line. Now they're importing them as children, even easier to brain-wash.

Real speak: If Romney had won the presidential election in 2012 instead of Obama, we wouldn't be hearing a THING about the so-called crisis of 40,000 or 50,000 CHILDREN crossing the border between Mexico and the United States during the past few years.