Irikaitz archaeological site: only for the tenacious

The recent discovery of a pendant at the Irikaitz archaeological site in Zestoa (in the Basque province of Gipuzkoa) has given rise to intense debate: it may be as old as 25,000 years, which would make it the oldest found to date at open-air excavations throughout the whole of the Iberian Peninsula. This stone is nine centimetres long and has a hole for hanging it from the neck although it would seem that, apart from being adornment, it was used to sharpen tools. The discovery has had great repercussion, but it is not by any means the only one uncovered here by the team led by Álvaro Arrizabalaga: “Almost every year some archaeological artefact of great value is discovered; at times, even 8 or 10. It is a highly fruitful location”.


Irikaitz lies behind the bath spa in Zestoa, on the other side of the river Urola, 14 metres from the river bank. The archaeologist from the University of the Basque Country (UPV/EHU) has been carrying out excavations here summer after summer, together with students and researchers from this and other universities and in cooperation with Aranzadi Science Society. Since 1998 they have uncovered 32 square metres; nothing compared to the eight hectares (at least) that this “gigantic” open-air site covers. This is archaeology, demanding a lot of patience, but the results are worth it: “You feel as if you have found something that has been waiting to fall into your hands for 200,000 years”.

The tasks pertaining to an archaeological site are complex and lengthy in any case, but particularly so at Irikaiz. To start with, because it is in the open air. In the case of caves, it is known that they served as refuges for our ancestors and, once their location is identified, it is highly possible that archaeological treasures are found there. Open air archaeological sites, on the other hand, are discovered when some civil engineering infrastructure has to be built, and it is difficult to predict what will be found. Moreover, in Zestoa there are remains from the Lower Paleolithic, when there are hardly any references from this period in the Basque Country. According to Mr Arrizabalaga, when they started, “it was like a lottery. We did not know what to expect – either about its chronology or about the kinds of remains likely to be uncovered”.
Precisely because of this lack of references, they were fascinated when they came across “totally exotic” raw material: volcanic stones. “In the first dig, we thought at first that someone may have brought the rocks there when they were building the Urola railway, to use them as ballast. It was all so surprising and incredible”, said the archaeologist. But no; this phenomenon had another logical explanation: “It is a geological rarity. In the Urola River valley there is a layer of volcanic stones; the river cut through these, took them to the surface and brought them to this place. This is why humans from prehistory came here – there was no other place in the Basque Country with stones like these”.

The fact that the remains are so old or the features of the materials thereof so unusual make dating in Irikaitz very difficult, as most of the methods commonly used to this end are of little use here. A clear example of this is that any kind of dating with bone remains has had to be totally discarded; unlike in other sites; here there are hardly any such remains, the earth here being so acidic that it has consumed almost everything in this respect, leaving only stone tools and plant fossils.


There are, thus, few means for dating certain remains. There were two periods of human occupation in Irikaitz, the most recent being 25,000 years ago, the pendant discovered this summer being from that time. But, it is the older occupation that gives headaches in trying to date it. Yes, it dates from the early Stone Age (Lower Palaeolithic), but when exactly? There hardly exist archaeological sites similar to this one, to act as a reference. As this archaeologist explained, “there is no other case of the Lower Palaeolithic under these conditions along the strip of land bordered by the Bay of Biscay, and only a few like it in the whole of the Iberian Peninsula”. It is impossible to narrow the dating to less than an interval of 350,000 years: “We know it cannot date from later than 150,000 years ago (when that period ended), and neither can it be prior to 500,000 years ago, because the sea covered the area during that period”.
Therefore, of the 18-20 dating methods currently available, there are no more than two applicable to Irikaitz. Both involve luminescence, and with which Arrizabalaga’s team are attempting to get results. The first method acts to specify when the sun illuminated a piece of quartz for the last time; without the wished-for results, however. The second is based on thermo-luminescence, a method with which they are working currently: this is applied to certain types of stones which have undergone heating from fires, and the measurement is based on the amount of radiation accumulated.
Since 1998, more than 500 people have carried out field work at this prehistoric archaeological site of Irikaitz; without counting those who have contributed from the laboratory. This has included a considerable group of researchers who have worked tenaciously in the search for any result, no matter how small. Many of these research workers belong to the UPV/EHU, like Mr Arrizabalaga. And, although the fruit of their work is harvested little by little, they feel they are rewarded. “If you Google Irikaitz, some 7,000 entries appear. We started digging in 1998 and, by 2001, the site was mentioned as a reference not written by us, in relation to the history of this geographical area”.
Posted by Jan at 7:18 PM No comments:

Pushing Back the First Americans, a Thousand or Two Years at a Time

State archaeologists say discoveries unearthed in 2010 at a long-studied archaeological site known as Coats-Hines in Cool Springs reveal it to be one of only a few sites that show early man in this area hunted and ate “megafauna,” a term describing very large animals.

Scientists confirm finding three and possibly four mastodons — large elephant-like creatures with tusks — at the site, with one mastodon, known as Mastodon B, having “unequivocal association” with human activity in the form of butchering marks.

“(O)nly a handful of sites have been identified in the Eastern United States which provide incontrovertible evidence of humans hunting megafauna,” archaeologists Aaron Deter-Wolf, Jesse W. Tune and John B. Broster, who oversaw the excavations, reported in the Tennessee Archaeology journal.
Earlier this year, the Coats-Hines site became one of 11 places added to the National Register of Historic Places by the state Historical Commission. Excavations began at the site in 1977.

An archaeological excavation turned up the bones, artifacts and animal remains that archaeologists now say prove human activity occurred here before 12,000 B.C. The site is in the backyard of a private home and is one of the two oldest human settlements documented in Tennessee.

Archaeologists and Middle Tennessee State University students turned up human artifacts, pollen samples and more than 1,500 animal bones that can be traced to a variety of species.

Excavations at the property in 1994 revealed the only known example in the Southeastern U.S. of mastodon remains directly associated with human-made stone tools in an undisturbed context, said Deter-Wolf, state prehistoric archaeologist.
Posted by Jan at 7:01 PM No comments:

Labels: the peopling of America

I happened across this very interesting photograph taken today in Lima Peru, of shamans conducting a "good luck" ceremony over two posters - one is the Prime Minister of Spain; the other is the new Fearless Leader of North Korea.  Is he out of diapers??? 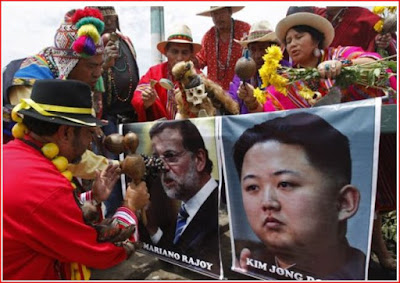 India fininished OUT OF THE MEDALS?  WHAT?

My first reaction is - what kind of fix was in?  My second reaction is - it's not polite to put in writing.  If you want to accept these final standings, here they are, for what they're worth:


Board pairings and results:

Now I have to finish cleaning the upstairs bathroom.  I think I'll scrub the toilet again.
Posted by Jan at 10:32 PM No comments: