Hidden beneath the world's largest prehistoric stone circle, archaeologists in England have discovered an even older, secret square-shaped megalithic monument.
"Our research has revealed previously unknown megaliths inside the world-famous Avebury stone circle. We have detected and mapped a series of prehistoric standing stones that were subsequently hidden and buried, along with the positions of others likely destroyed during the 17th and 18th centuries," Mark Gillings, academic director and reader in archaeology in the School of Archaeology and Ancient History at the University of Leicester, said in a statement. "Together, these reveal a striking and apparently unique square megalithic monument within the Avebury circles that has the potential to be one of the very earliest structures on this remarkable site." 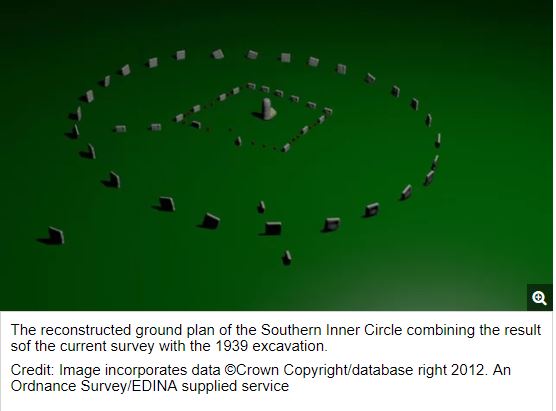 The new finds are shocking for such an old site, which has been extensively studied by archaeologists since the 1600s. The Avebury site in Wiltshire, southwest England, is one of the most mysterious ancient monuments in the country. The  Neolithic monument was built largely between 4,850 and 4,200 years ago, according to English Heritage. Along with Stonehenge, Silbury Hill and Windmill Hill, the newfound monuments may have formed a vast sacred landscape that ancient people used for rituals and communal gatherings whose purpose remains shrouded in mystery.
The site of Avebury consists of a vast circular henge — of which all that remains is a 3,270-foot-across (1,000 meters) circular ditch and embankments — and an inner stone circle, which was once composed of nearly 100 massive, upright boulders and two smaller inner stone circles.

In 1939, Alexander Keiller, heir to a marmalade fortune and an amateur archaeologist, noticed that some of the stones in the inner circle seemed to be angular in their alignment. He believed the faint hint of a square may have been the remnants of a medieval cart shed, according to the statement. World War II soon broke out, and Keiller was unable to continue his archaeological surveys.
In the current study, Gillings used a technique called ground-penetrating radar, which maps the resistance of the Earth to the sound waves. He found several interesting features: A number of high-resistance objects (presumably buried stones), as well as lower resistance patches (possibly more deeply buried stones or construction debris), along with low-resistance areas (likely destruction pits). The orientation of these buried stones forms a square, Gillings reported in the study, which has not yet been submitted to a journal for peer review.

It turned out that the angular setting of stones that Keiller had discovered formed a stone square that enclosed a circular feature known as the Obelisk. While circular monuments from the late Neolithic period are common, square monuments were oddities at that time, the researchers noted.

The findings could shed light on why the Avebury monument was built — one possibility is that the square demarcates the boundaries of a first house or settlement in the area, which was then used as the center of the inner circle, the researchers speculate in the study.
"The completion of the work first started by Keiller in the 1930s has revealed an entirely new type of monument at the heart of the world's largest prehistoric stone circle, using techniques he never dreamt of.  And goes to show how much more is still to be revealed at Avebury if we ask the right questions," Nick Snashall, National Trust archaeologist at Avebury, said in the statement.

******************************
Hola, darlings!  I thought this was a pretty interesting discovery, especially after all this time, Holy Hathor.  It appears that the ideas of ancient man, which archaeologists often say we "do not understand or know the purpose of..." blah blah blah, were actually well understood and adopted/adapted throughout the world in various cultures, often very early on.  So either diffusion spread some ideas like wildfire or independent origination of similar concepts were arising, often nearly simultaneously, in different cultures around the globe, or maybe there was one originating civilization from which concepts were carried away across the globe as mankind spread out.  Hmmm...  Only the Shadow Knows.

I was reminded of a couple of different, but related, concepts regarding circles and squares.  The first is very ancient and is Chinese - the square within the circle.  Briefly generalizing, in Chinese thought the Earth is "square" and the Heavens are "round" (a sphere encompassing the square plane of the Earth, or a dome [half of a sphere] hovering over it. The older buried square shape within the larger circle of Avebury certainly fits this description.  Here's a classic example from China - embodied in a coin:

The concept of the square Earth and the "round" Heavens, however, dates back to the mid-4th millennium BCE.

Both Orthodox and Roman Catholic tradition also uses the symbolism of the square "Earth" and the round "Heavens."  A nice summary of Orthodox traditions can be found in this 2014 article from the Orthodox Arts Journal.  Here's a classic example in Byzantine architecture, the famous Hagia Sophia in Istanbul (f/k/a Constantinople), built in :

The image above is from Richard Cassaro's website.  The first depiction is Leonardo da Vinci's Vitruvian Man (1487).  He also shows other "Vitruvian Men" drawn by other artists during the 11th to 16th centuries CE.  Cassaro stated: "Note how da Vinci draws The Vitrivian Man inside a squared circle: he understood the implications of the Masonic doctrine."  Essentially, the square represented the human condition or the human body (the "Earth") and the circle represented the Divine within us (the "Heavens").

In Neanderthal DNA, Signs of a Mysterious Human Migration

With fossils and DNA, scientists are piecing together a picture of humanity’s beginnings, an origin story with more twists than anything you would find at the movie theater.

The expert consensus now is that Homo sapiens evolved at least 300,000 years ago in Africa. Only much later — roughly 70,000 years ago — did a small group of Africans establish themselves on other continents, giving rise to other populations of people today.

To Johannes Krause, the director of the Max Planck Institute for Human History in Germany, that gap seems peculiar. “Why did people not leave Africa before?” he asked in an interview. After all, he observed, the continent is physically linked to the Near East. “You could have just walked out."

In a study published Tuesday in Nature Communications, Dr. Krause and his colleagues report that Africans did indeed walk out — over 270,000 years ago.

Based on newly discovered DNA in fossils, the researchers conclude that a wave of early Homo sapiens, or close relatives of our species, made their way from Africa to Europe. There, they interbred with Neanderthals.

Then the ancient African migrants disappeared. But some of their DNA endured in later generations of Neanderthals.

"This is now a comprehensive picture,” Dr. Krause said. “It brings everything together."