OHMYGODDESS! I could not make up a story like this if I tried!


CAIRO (AP) — Egypt's military leaders have come under ridicule after the chief army engineer unveiled what he described as a "miraculous" set of devices that detect and cure AIDS, hepatitis and other viruses.
The claim, dismissed by experts and called "shocking to scientists" by president's science adviser, strikes a blow to the army's carefully managed image as the savior of the nation. It also comes as military chief Field Marshal Abdel-Fattah el-Sissi, who toppled Mohammed Morsi in July after the Islamist leader ignored mass protests calling for him to step down, is expected to announce he'll run for president.


The televised presentation — which was made to el-Sissi, interim President Adly Mansour and other senior officials — raised concerns that the military's offer of seemingly inconceivable future devices will draw Egypt back into the broken promises of authoritarian rule, when Hosni Mubarak frequently announced grand initiatives that failed to meet expectations.

This is awesome!  This is presented in a pictorial slide show, with not much text overall.  You need to look at all of the photos...

(People's Daily Online) 09:20, February 19, 2014
Shigu Mountain Western Zhou Dynasty cemetery, located at Shijutou village in Baoji, northwest China's Shaanxi province, was discovered by local people in 2012 when they dug house foundations. A total of 51 bronze sacrificial utensils were found in 12 tombs when archaeologists excavated the cemetery from August to December 2013. The cemetery was confirmed to belong to Jiang families living at the end of Shang dynasty and the beginning
CHECK. IT. OUT. 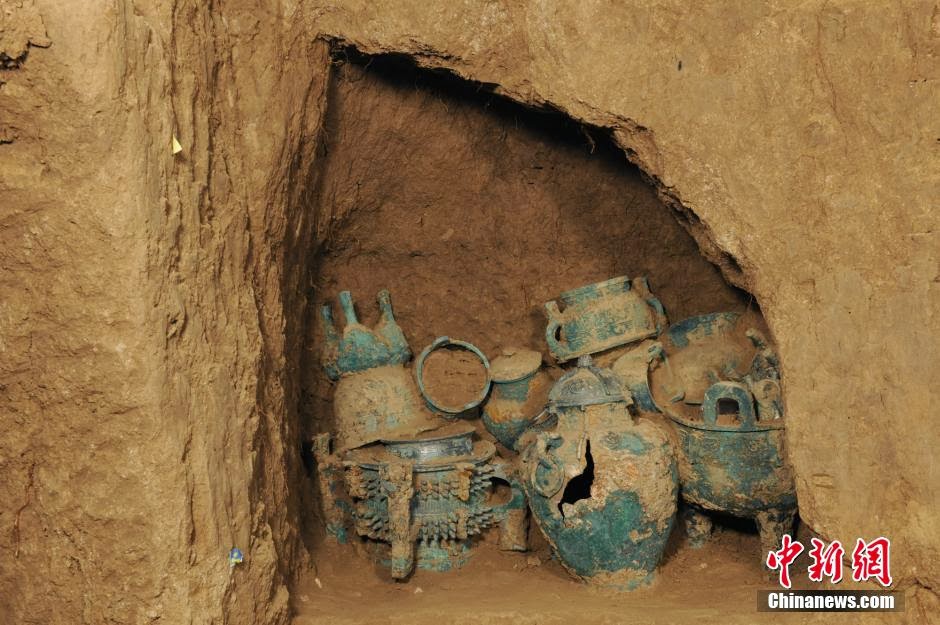 Only China refers to archaeological discoveries as "relics."  Something must be lost in translation :)


Chinese archaeologists have discovered altar relics at the ruins of a neolithic city, which indicate religious culture at that time. [Are they shocked by this, gasp!]
An initial survey showed the eight-meter-high altar had a three-tiered structure with a stone base 90 meters long. Jade relics and pits for offerings as deep as three meters were found nearby, said Sun Zhouyong, deputy head of the Shaanxi Provincial Institute of Archaeology on Thursday.
Excavation has not started at the altar, outside the walls of the Shimao Ruins in Shenmu County.  Archaeologists have collected some jade for further research. They excavated over 80 human skulls last year.
Shimao Ruins were discovered in 1976 , but archaeologists did conduct a a thorough survey until last year, which led to more discoveries.
The city was found to have inner and outer structures, and the walls surrounding the outer city extend over four square kilometers.
The city was built about 4,300 years ago and abandoned roughly 300 years later during the Xia Dynasty (2100-1600 BC), the first dynasty in China described in historical chronicles.

This just turns my stomach.  It's not like they DID NOT KNOW IT'S THERE IN THE GROUND and built over sacred ground in ignorance.  Vomit, vomit, vomit.  Oh, the almighty power of money money money.


Almost 200 homes are to be built on the former site of the largest archaeological dig in York city centre.
Consent has been given for 195 one, two and three-bedroom apartments in the £150m Hungate project, developers Hungate Regeneration Ltd said.

The York Archaeological Trust spent five years from 2007 to 2012 on the dig on the site by the River Foss.

Construction on the land, which lies within the city's walls, is scheduled to start in the summer of 2014.

Discoveries included a Roman necklace consisting of 299 small glass beads and rare jet jewellery dating from the 3rd or 4th Centuries.  The dig also revealed the edges of the Viking town of Jorvik where at one time warehouses would have stood.
Posted by Jan at 7:00 PM No comments:

Evidence of this practice has been staring us in the face for years, we've just been too damn prejudiced to acknowledge it for what it is!

This is NOT new evidence -- I cannot stress that enough.  This is old evidence that is being re-examined.  Well, don't some of us look rather silly now...

Mar 1, 2014|By Kate Wong (from Mar 1, 2014 edition of the magazine)
In their treatment of the dead, Neandertals were a lot like us
[Um, they ARE us!]
Around 60,000 years ago, in a small limestone cave in what is now central France, Neandertals dug a grave and laid an elderly member of their clan to rest. That is the picture emerging from the archaeological site that yielded the famous La Chapelle-aux-Saints Neandertal skeleton in 1908, and it has important implications for understanding the behavior and cognitive capacity of our closest evolutionary relatives.

Some archaeologists have long argued that a number of Neandertal sites preserve evidence of burials, a practice considered to be a key feature of modern human behavior. But critics have countered that the sites were excavated long ago using outmoded techniques that obscure the facts.

In recent years researchers have found compelling evidence that Neandertals had other modern practices, such as decorating their bodies and making sophisticated tools. They did such things before anatomically modern humans invaded their turf, suggesting that Neandertals developed cultural traditions independently, rather than learning them from savvy newcomers. [Or perhaps the "savvy newcomers" weren't so savvy in some things and learned from the big boys on the block.]

A reexcavation of the French cave has recovered more Neandertal bones and teeth, as well as stone tools and animal remains. William Rendu of New York University and his colleagues found a number of features indicating that the pit containing the Neandertal skeleton was at least partially modified for the purposes of burial, as opposed to being an entirely natural depression. They also observed that whereas the animal remains appear to have been gnawed on by carnivores, the Neandertal bones exhibit no such damage, suggesting that the corpse was covered rapidly, as would occur if it were intentionally buried. Rendu and his colleagues reported their findings in January in the Proceedings of the National Academy of Sciences USA. [Do the original 1908 field notes reveal the removal of stones or rocks from the top of the "pit?"]

Ironically, the original La Chapelle-aux-Saints discovery in the early 20th century gave rise to the Neandertals' unfortunate reputation as dumb brutes. Shortly after the find, French paleontologist Marcellin Boule reconstructed the skeleton to show a stooped, slouching individual with bent knees, a short neck and a low, sloping skull. Thus, the image of the oafish caveman was born. Scientists later determined that the skeleton was in fact that of an aged male who suffered from severe arthritis.