Information at St. Louis Chess Club website.  You will be able to watch all events online at U.S. Chess Champs .

October 8:  Combined Opening Ceremony and drawing of lots for all events.

Ancient Boardgames: Experts find the missing piece (but can't figure out how the game was played)

The last of weather warm enough to be able to sit outside in my screened Shezebo and enjoy the breeze, the last of the flowers in my gardens and the sunshine is here this week.  It should last for the rest of the week, but with temperatures declining from the mid-70s F to the mid-60s F by the end of the week.  Being able to sit outside in the privacy of my yard and gardens is such a treat after numerous rainy streaks and cold streaks!

Below is an interesting article I found this afternoon.  I immediately thought of Mr. Don, and what he might make of this.  How I miss him!  Don would have found this absolutely fascinating and would have chewed on it for weeks, coming up with all kinds of potential hypotheses.  Me, I'm just the same old, same old pragmatically minded legal eagle, LOL!  Don was the experimental balloon, flying high; I was the anchor.  What a team we made.  The 8th year since Don's death will be here in a few days, and yes, it's heavy on my mind. 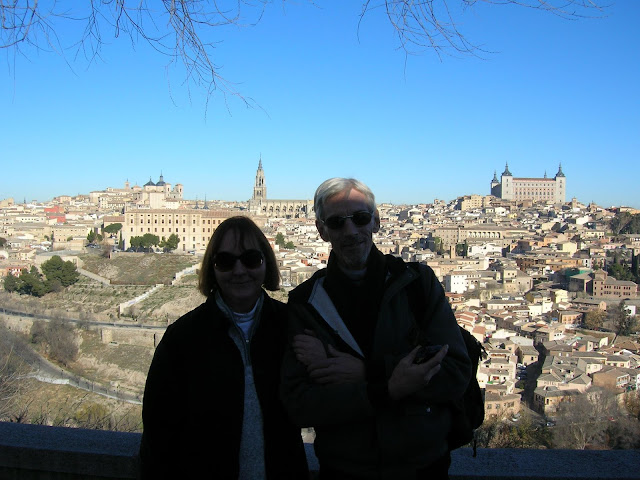 The photo above is one of the last taken of Don and I together.  We revisited Spain in 2012, a little more than 10 years after our first trip there in 2002.  This was taken on a cliff-side road overlooking the ancient town of Toledo in mid-January, 2012.

Ancient boardgames:  Experts find the missing piece (but can't figure out how to play the game)

'Dogs and Pigs', a set of 5,000-year-old figurines found in Turkey's southeast, is nominated as one of the world's oldest and most crowded games but its rules remain a mystery 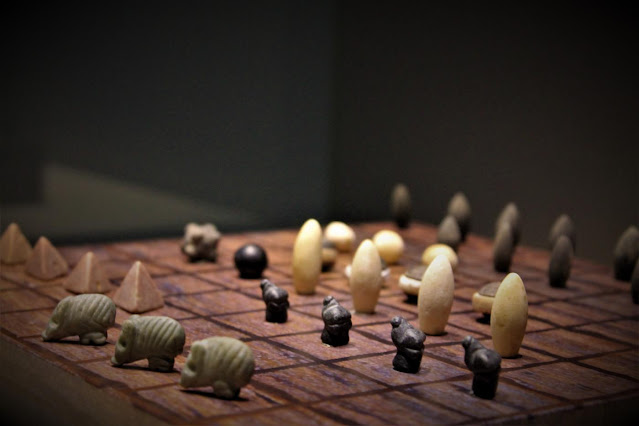 It’s a curious sight inside the Batman museum, Turkey, where attention seems to be focused on a section to the right of the main exhibition room.

Within a glass display case in the corner, more than three dozen colourful animal figurines are presented on a chequered wooden board. Alongside the elaborately sculpted animals stand similarly tiny artefacts in various abstract and pyramid shapes.

The visitors, including a group of schoolchildren, hover in awe over the gaming pieces in the corner. They speculate over the origins, discussing excitedly the intricate connections they may have.

For 11-year-old Rasan Ekinci, a Batman local who’s been playing chess for three years, usually with her younger sister, the stones in the back rows resemble pawns from a chess board.

"But this seems more fun than chess,” Ekinci says. “I’d want to save up lots of money and buy this."

Her school friends, meanwhile, think some of the more abstract games pieces look like burgers, trees and meteorites.

According to the museum's director, Seyhmus Genc, out of all the collections, visitors are most surprised to see these pieces. “They often ask us how the game may have been played,” he said.

"[They] are signature pieces of our museum by now. I must say they transport me to other worlds also."

According to the carbon dating, these handcrafted pieces are around 5,000 years old.

Discovered in an archaeological site in Turkey’s south-eastern Siirt province, they could possibly represent one of the world’s oldest-known board games, sitting alongside the Egyptian Senet, Chinese Go, and Mangala, which is still played in Turkey today.

With or without the title, these items tell an intellectual, sociological story from the Early Bronze Age in eastern Anatolia - a major crossroads and corridor for trade and culture circa 3,100-2,800 B.C.

Despite tensions caused by occasional periods of regional conflict, including the separatist Kurdistan Workers’ party’s (PKK) armed campaign against the Turkish state and the Syrian War across the border, the field phase of the project, which was carried out as part of the Ilisu Dam rescue excavations, launched in 2007 and ended in 2019, before the hydroelectric plant became active.

"[I’m] very happy we found all the pieces before excavations had to end,” Saglamtimur, who teaches at Ege University in Izmir, told Middle East Eye.

"The gaming set of 40 pieces discovered in the [Basur Mound] is nominated to be the world’s oldest and most crowded game set ever found."

"Although they steal the show from the other findings,” he said, adding that to him the Early Bronze Age site is most remarkable because of the large number of findings in 18 tombs.

These include 80kg of metal objects (mostly copper alloy, as well as gold and silver), thousands of beads and jewellery with mountain crystals, and human bones, which hint that children were sacrificed here.

As for the game, the first 39 pieces were discovered in 2012, found buried together by one of the tombs, and were then moved to the neighbouring Batman province for public display in the museum.

In February this year, Saglamtimur announced that the game's pieces were complete - the fourth elephant figurine had been discovered in the excavations in late autumn, completing all 40 pieces.

"All but the board,” the archaeologist noted. “It must have eroded over time. We found some wooden pieces that had eroded by [the tomb]. The [board] in the museum was made for display purposes."