Race is an artificial concept.  But research in the 21st century is overthrowing old concepts held for generations.  Perhaps in time the concept of "race" will finally die, because there is NO scientific basis for it.

Reported at Yahoo, from Associated Press

LONDON (AP) — DNA from a 10,000-year-old skeleton found in an English cave suggests the oldest-known Briton had dark skin and blue eyes, researchers said Wednesday.
Scientists from Britain's Natural History Museum and University College London analyzed the genome of "Cheddar Man," who was found in Cheddar Gorge in southwest England in 1903.
Scientists led by museum DNA expert Ian Barnes drilled into the skull to extract DNA from bone powder. They say analysis indicates he had blue eyes, dark curly hair and "dark to black" skin pigmentation. 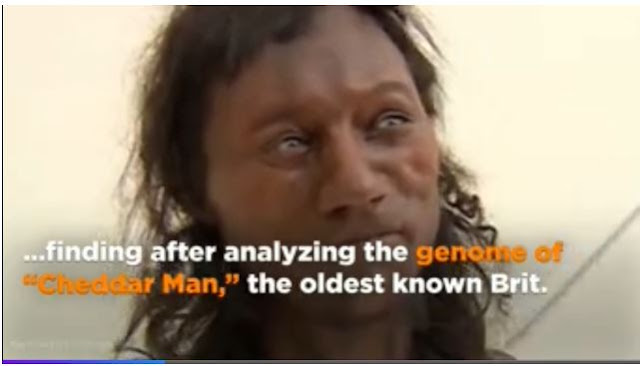 The researchers say the evidence suggests that Europeans' pale skin tones developed much later than originally thought.
"Cheddar Man subverts people's expectations of what kinds of genetic traits go together," said Tom Booth, a postdoctoral researcher at the museum who worked on the project.
"It seems that pale eyes entered Europe long before pale skin or blond hair, which didn't come along until after the arrival of farming."
"He reminds us that you can't make assumptions about what people looked like in the past based on what people look like in the present, and that the pairings of features we are used to seeing today aren't something that's fixed," Booth said on the museum website.
It's thought ancient humans living in northern regions developed pale skin because it absorbs more sunlight, which is needed to produce vitamin D.
Cheddar Man shares a genetic profile with several other Mesolithic-era individuals found in Spain, Hungary and Luxembourg whose DNA has already been analyzed. The group, known as Western Hunter-Gatherers, migrated to Europe from the Middle East after the last Ice Age, about 12,000 years ago.
Dan Bradley, a professor of population genetics at Trinity College Dublin, said the findings were credible.
"There are other data from hunter-gatherers who lived in western Europe, and they also show darker skin and light eyes, blue eyes," said Bradley, who was not involved with the study.
"Modern Europeans are a mixture of people like this, who are older hunter-gatherer inhabitants of western Europe, and people who came in with the advent of agriculture, and people who came from the east in the Bronze Age and who also brought new genetics into the region."
Cheddar Man is the oldest complete skeleton found in Britain. Humans had lived in Britain off and on for thousands of years before his time, but they had been wiped out during periodic ice ages.
Cheddar Man would have been one of a tiny population of hunter-gatherers in Britain at the time. Scientists, who have been studying his skeleton for decades, say he appears to have had a healthy diet but died in his 20s, possibly through violence.
Dutch "paleo artists" Alfons and Adrie Kennis created a likeness of Cheddar Man based on the British scientists' findings, showing a man with long curly hair, a short beard and striking blue eyes.
Posted by Jan at 6:23 PM No comments: