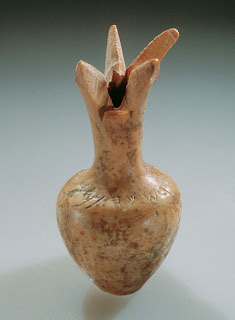 For more than a decade the pomegranate had been on display in the Israel Museum and was widely believed to be the only surviving relic from Solomon's Temple. The inscription on the shoulder of the pomegranate reads: "(Belonging) to the Temple (literally, house) of Yahweh, Holy to the Priests."

You don't have to know Hebrew or be an expert in ancient Hebrew epigraphy to look at the pictures and see whether the letters stop short of the break or go into the break.
Photographs and reports at Biblical Archaeological Review.
Posted by Jan at 9:34 AM