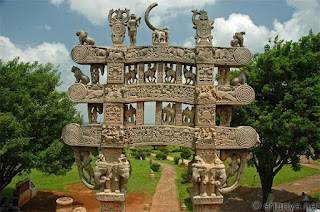 Sanchi, Madhya Pradesh, India
A UNESCO world heritage site in central India near the Betwa River. On a flat-topped sandstone hill, 90m above the countryside, stands the best-preserved group of Buddhist monuments in India. Most noteworthy is the Great Stupa, discovered in 1818. It was probably begun by the emperor Aśoka in the mid-3rd century BCE and later enlarged. Solid throughout, it is enclosed by a massive stone railing pierced by four gateways on which are elaborate carvings depicting the life of the Buddha. The stupa itself consists of a base bearing a hemispherical dome representing the dome of heaven enclosing the Earth; it is surmounted by a squared rail unit, the world mountain, from which rises a mast to symbolize the cosmic axis. The mast bears umbrellas that represent the various heavens. Other remains include several smaller stupas, an assembly hall (caitya), an Aśokan pillar with inscription, and several monasteries (4th–11th cent. CE). Several relic baskets and more than 400 epigraphical records have also been discovered.
This is the eastern gateway to the giant stupa. It is particularly interesting because one row shows elephants with riders atop (bishop) and on the row above that are calvary riders (knight). The stupa dates to the mid 3rd century BCE; it seems unlikely that armies of this period didn't also have foot soldiers (pawns) and chariots (rooks). We know, of course, that there were plenty of kings to go around - just about one for each city-state - and where there are kings, there are counselors (queen). The dating of Asoka's Sanchi definitely supports Ferlito's and Sanvito's proposition that all elements for chess were in place in India well before Murray's hypothetical date of invention of the 5th to 6th centuries CE.
Posted by Jan at 9:14 PM