From the trenches
Royal Goddesses of a Bronze Age State
Volume 61 Number 1, January/February 2008
by Marco Merola

It's been more than 30 years since Italian archaeologists found a vast archive of 17,000 cuneiform tablets at the Bronze Age site of Ebla in northern Syria. But the ancient city is still surprising those who work there. Last year archaeologist Paolo Matthiae's team discovered two almost perfectly preserved figurines that confirm textual evidence for a royal cult of the dead focused on the city's queens. They also found an unusual tablet that allowed scholars to reconstruct the political climate that led to Ebla's destruction in 2300 B.C., when it was sacked by Sargon of Akkad.

"We made the finds in two peripheral rooms of the great Royal Palace, where we discovered the cuneiform archive in the 1970s," explains Matthiae. "They were part of the zone behind the Court of the Audience Hall, a sort of storage area which must have held the treasures of the king of Ebla."

Initially the team avoided the rooms, assuming they had been emptied when Sargon ransacked the city. "But we were wrong!" says Matthiae. "Evidently the two statues were crushed into the ground and miraculously escaped the pillage." 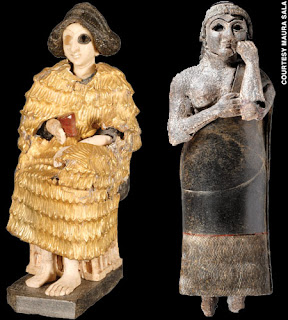 Both figurines are intricate representations of women, which are rare in Near Eastern Bronze Age art. One, made of steatite and wood, is depicted with her arms arranged in a gesture indicating prayer. The second figurine holds a goblet and wears an ornate gold dress. Both seem to have been used in a ritual mentioned in a tablet from Ebla that describes how the city's dead queens became female deities who were then worshiped privately by their successors. Matthiae suspects the steatite figure depicts a living queen who would have prayed to the gold-covered figurine, itself a representation of a dead queen who had become a goddess.

© 2008 by the Archaeological Institute of America www.archaeology.org/0801/trenches/goddesses.html
Posted by Jan at 12:57 PM