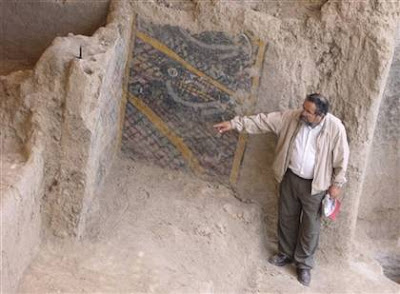 The oldest-known polychrome mural in the Americas was recently discovered during rescue excavations at Cerro Ventarrón, a site on Peru's arid north coast. Unearthed last fall by archaeologist Walter Alva of the Royal Tombs of Sípan Museum, the 4,000-year-old painting depicts a deer snared in a net. The mural adorns a wall of what has been identified as a fire temple, a well-known feature of later Andean ceremonial architecture in which people burned offerings to the gods. Adjacent to the mural is a 10-foot-high, semicircular chimney that held the temple's ritual fire--its walls still blackened with soot. The exterior walls of the temple, which was built atop a multi-terraced platform mound, are painted with a red-and-white zigzag pattern.

"The architecture of the fire temple is very, very primitive," says Alva, noting that the adobe used to construct it was devoid of stone and appears to be made up of little more than dried blocks of river sediment. However, the temple is significant because it bears a number of hallmarks that seem to be the most ancient expressions of fundamental ideas in Andean religion. "The stylized rendering of a deer snared in a net," he explains, "runs deep in Andean iconography, being symbolic of the primordial hunt and man's first offerings to the gods." The captured deer image was still being used 2,000 years later by the Moche.

Alva also recovered a cache of offerings, including a conch shell trumpet and the remains of a monkey and an Amazonian parrot, the latter entombed with a simple turquoise collar. "This combination of offerings--possibly deposited during a ceremonial burial of the building--is extremely significant, particularly at this early date," says Alva, pointing out that they represent the three realms of the world: sea, earth, and sky. This too, he says, is a religious concept that is more fully developed in the art of later Andean cultures, such as the Moche and the Inca.

Cerro Ventarrón is the latest in a string of recent finds, including the vast 4,600-year-old ceremonial complex of Caral-Supe ("A Monumental Feud," July/August 2005), that continue to push back the date for large-scale ritual architecture in the Andean region. While Caral-Supe is notable for its monumental buildings, including a fire temple, and an extraordinary collection of flutes and whistles made from the wing bones of condors and pelicans, it has yet to yield any paintings like the mural at Cerro Ventarrón.

© 2008 by the Archaeological Institute of Americawww.archaeology.org/0803/trenches/mural.html
Posted by Jan at 2:53 PM