The Art in Chess

When we visited New York in 2005, delion and I spent two full days exploring the Metropolitan Museum of Art - and didn't see the half of it! We will go back some day. 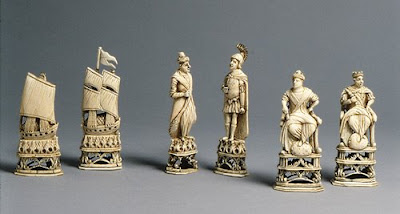 Chess was avidly played in Russia by czars, princes, and merchants. The design of this chess set reflects the Indian influence in the introduction of the game to Russia, probably during the eighth or ninth century. Initially, the moves were a bit different from the European version of the game.

Although the two sides of this set—Russian Christians versus Muslims—are not differentiated by color, it is easy to distinguish them and the type was a standard Russian design. As in Indian sets, there are ships for rooks and elephants for bishops. The king is seated on a throne. Also as in Indian sets, next to the king is his vizier, here represented as a Roman officer. The pawns are Roman and Muslim soldiers. The elephants of the Christian side have mahouts but there are none on the Muslim side. The pierced, ajouré bases of these pieces are attached with ivory pins. They are carved with Neoclassical acanthus-leaf tips, which helps to date this set.

The town of Kholmogory, roughly fifty miles up the river from Archangel, was famous for its carvers, who used bone and walrus tusk for their productions. The sea mammal was landed in Archangel and every part of the walrus—the meat, skin, feet, and ivory tusks—was valued, for food and other products.
Posted by Jan at 8:37 PM