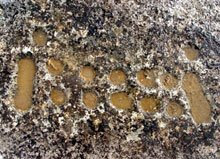 From CAIS (Circle of Ancient Iranian Studies) - I'll see if I can find more news on this discovery.

19 April 2008
LONDON,(CAIS) -- An ancient four-pointed compass-rose showing directions of ‘four cardinal points’ and a number of board-games carved on rocks discovered in the Iranian island of Kharg in the Persian Gulf, reported Persian service of CHN on Saturday.

The discovery was made by Shahram Eslami, a local and a member of Kharg’s Friends of Cultural Heritage. The relics were studied and their ancient origins identified by Dr Reza Moradi Ghiasabadi.

"The engravings are between 2000 and 3000 years old. The first discovered carving is located beside an ancient road which is a four-pointed compass-rose showing directions of four cardinal points within a square-shape with rounded angles setting, 50x50cm in diameters. Some sections of the compass-rose have been damaged, apparently as the result of a cracks in the rock," said Ghiasabadi.

He added, "the compass-rose's lines have been placed in a position to determine the cardinal points, which have only two degrees of error based on the Global Positioning System (GPS)".

“Thos is a unique discovery and a great deal of efforts and resources should be made available to safeguard the relic. Also we must not remove it from its original place," according to Ghiasabadi

The remaining carvings which are board-games were discovered in the northwest of the island. The board-games are in a mixture of circular and oblong shape settings, in various diameters, some 4cm and some in 10cm in circumference (see the picture). All these carvings engraved over the rocky-ground’s flat surfaces. The latter ones are located on the hinterland at the top of the cliff overlooking the waters of the Persian Gulf.

These game-boards have been carved on the rocks in various settings and Ghiasabadi have identified seven of them. Some of them could be the proto-type for backgammon.

The Persian Gulf's Iranian island of Kharg is situated at about 30 km northwest of Bandar-e Rig and 52 km northwest of Bushehr. It is the larger and more southerly of two islands (the other being Khargu). Kharg (also Khark) is about 8 km long and, at its widest point, 4 km across. The interior is hilly, terminating in cliffs at the northern and southern ends of the island.

Archaeologists have always believed the oldest settlement on the island dates back to Parthian dynastic era (248 BCE-224 CE), but as the result of a discovery in November 2007 history of the island was re-written, as the archaeologists have discovered an inscription (LINK) executed in Old-Persian cuneiform, dated to the Achaemenid dynasty (550-330 BCE). Since its discovery, the rock-inscription has been left unprotected in its original place at the mercy of looters, vandals, and harsh weather.

Original News bulletin published in Persian by CHN, and translated and prepared by CAIS.
Posted by Jan at 6:11 PM

...exciting, gaming on trade routes. as an aside, the tonalamatl
is the origin of cards 52 yrs,
4 suits, this is of course the
mazatl/mats(OHG)=meat(E)=
ma(n)za(na/mazard(E)=deer cherry orchard culture time, the apex of deer culture before weaving and agriculture take hold after
gobekli tepe(8k bc), and the
52 card deck and the tarot are
related by suits, coins being the
grain/diamond cuadrant as seed money was the first money.
as i looked at the italian
derivation of tarot, which i have
as tlalli otli(N)=earth/land road, there is also tarocci/tarock, one
of the few remaining references
besides tlaloc/rarog to the mazatl/
deer/orchard culture age god of
rain, e.g., tlaloc is the god of
day mazatl/deer/7, god of the
trecena, quiahuitl(N)/19=rainstorm,
source of words, aristo/harvest. in orchard culture storm and
wind harvested fruit trees, known as drops, harmonic with the rain
age, which began as nomad and settled into orchards. out of this
age we get aristocracy, cards, and
the tarot.
the ages overlap of course, tarot's last source was egypt, but
with mazatl/deer lineage/7, we have
the empress harvest goddess and
the star of famine, which relates
them to one mesoamerican goddess
of 7, chicomecoatl(N)=7snake, goddess of feast and famine, 7
being originally deer/mazatl=
tonacatecuhtli and tonacacihuatl=
male and female mazatl=nacatl(N)=
nachat(yiddish)=snaka(OE)snake(E)=
flesh.
with its strong relation to the
deer calendar cards/tarot may pre-
date chess as it seems to have many
elements of the game already formed.

That is a fascinating proposition that tarot may predate chess. We are looking at the roots of chess in ancient Egypt - thousands of years before the game evolved into 64 squares and 32 pieces. The basics are there, however - the cardinal points; the Eye of Ra with its divisions of 1/2, 1/4, 1/8, 1/16, 1/32, etc; the relationship to Chinese chess (xiang qi) which incorporates both 9s and 8s into his playing paradigm, which is echoed in the two separate dynasties of gods/goddesses - the Ennead Heliopolis and the Ogdoad at Hermopolis; and liubo, which predates xiang qi (as far as we know at present) with its interesting configuration similar to Nine Men's Morris board.

Mankind has probably played games from very early on, and also used processes to try to divine the future and the "will of the gods." The oldest processes are probably rooted in the most ancient traditions of divination, which was, I believe, universally practiced by prehistoric mankind, and from these evolved the more "cerebral" types of games such as tarot, liubo, chess, xiang qi.

The parallels are there - we just have to get better at fleshing out the lines!