The weather has turned clement at last! The air has dried out from 70 dew point (may as well wear a loin cloth and live in the jungle with that kind of dew point) earlier in the week and I've been able to live for the past two days without central air conditioning! What's more, we may get some scattered showers tomorrow. We need rain - desperately! NBC has the Olympics Opening Ceremony on tonight for FOUR HOURS. That was YESTERDAY'S NEWS. Oh please. Trying to jerk viewers into thinking this is "live." What a joke - and even funnier (and sad) is that people will fall for it! I am, instead, watching the 2004 "Hellboy." Well, it was that or "Washington Week." What would you watch? Actually, it's pretty engaging :) To tickle your ironic bone, your funny bone, your sore toe bone, your sniffly nose bone, your bad hair day bone, and whatever other bone you can think of, including empty pocketbook bone: 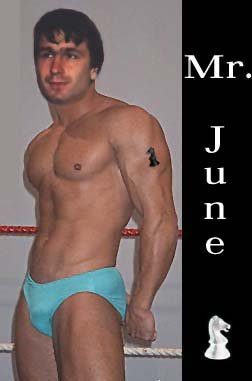 Was that a cue, perchance? Meet our Mr. June, 2000 pin-up from the cheesy chess tabloid formerly known as The International Chessoid a/k/a TIC. He's none other than GM Ivan Vassalhunk, known to be a bit high strung but with an ELO of 3452 and that bod, I doubt you'll hear many complaints from the chess femmes...