Byzantine Mosaics of the Amazon Queens 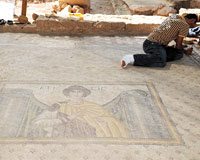 From Today's Zaman: Amazonian queen excavations reveal ancient palace in Şanlıurfa Excavation work in southeastern Şanlıurfa province has led to the discovery of a Roman palace (A.D. fifth to sixth century) and floor mosaics. The Anatolia news agency reported on Sunday that the Haleplibahçe district, one of the oldest historical residential areas of the city, constitutes an important part of the ancient city of Edessa, famous for its wall pictures depicting the Amazonian queens Hippolyte, Antiope, Melanippe and Penthesileia hunting in the forest. The Ministry of Culture and Tourism began the excavation work two years ago after these wall pictures were found. Archeologists have analyzed the mosaic of goddess Kticic, the founder and guardian goddess, found during the course of this year's excavations, which lasted for four months. She stands in the foreground, holding the scales of justice in her hand. The background includes a black man and a zebra. The archeologists explained that the figure of the black man and the zebra in mosaics are characteristic of Palestine and that this was the first time they had been encountered in Turkey. The work also partly revealed a mosaic that depicts a scene in which Chiron, the trainer of Achilles -- the famous Greek mythological warrior -- is learning how to fight. Excavation work in the region still continues and, following its completion, the area will be turned into an archeology park. Mehmet Önal, one of the archeologists working on the Haleplibahçe excavations, said the mosaics they found were very similar to those found in Antakya and Byzantine mosaics in İstanbul. Önal noted that they have revealed western, northern and eastern walls of the ancient building this year, adding that there were also fountains and shallow pools around the walls of the palace. Önal stated that the palace had a 34-meter-long baronial hall with a floor covered with mosaics, adding that the palace was similar to villas that were found in the ancient city of Zeugma in Gaziantep province. However, none of the villas in Zeugma had a hall of this size. "The tesserae used for the mosaics of this palace are very small, which shows that the workmanship of the mosaics was very good. This shows that the palace belonged to an important administrator of the Eastern Roman Empire," Önal said, adding: "There is an unbelievable color harmony in the mosaics with their rich anatomical figures. No other mosaic has ever had the influential image of the horse that Amazonian Penthesilea rides." 14 October 2008, Tues Tuesday TODAY'S ZAMAN WITH WIRES İSTANBUL
Posted by Jan at 8:18 PM