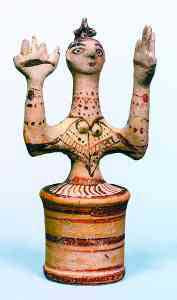 From the March/April 2009 edition of Biblical Archaeology Review Worldwide (p. 72) Crete With lavish painted ornamentation and a dramatic pose, this female figurine commands attention. The bird perched atop her head announces her divine status, as birds such as doves and pigeons were symbols of a goddess throughout the ancient Mediterranean world. Found at the center of a small communal shrine at Knossos, on the island of Crete, this 8.5-inch, clay figurine from the 14th century B.C. represents a Minoan goddess. According to scholar Giorgos Rethemiotakis, the goddess’s oversized arms and accentuated eyes “vividly bring to life the message and content of the prayer, the immediate visual and mental contact of the goddess with the praying faithful.” Minoan religion centered around goddess worship; there also is evidence of a powerful female priesthood. Since the language of the Minoans has never been deciphered, mot of what we know of the civilization comes from Greek and other neighboring cultures.
Posted by Jan at 1:25 PM

...this gal would be lady birdsnake,the weaving goddess,
notice both her hands are in
the air, she is goddess of air,
ekatheron(gk)=throw of the xiotl(N)/shuttle, within the gk word
for katherine, we see, hecate/
ehecatl(N/day2booktones), venus
is her planet and she is mother of
birdsnake quetzalcoatl and zeus
as well, first known to the greeks
as snake but an aryan skygod.
weaving villages settled along
the danube, the art of weaving
itself may have come from the east,
e.g., hecate's father, perseus,
is the word persian, the coastal part of iran on the gulf of ormuz,
where the superb mayan weavers came from as the 2nd coming of
quetzalcoatl c. 1.5 bc, slightly
later than the olmec civ. which
is called the mother race of mexico, in fact, i have them as
rowers for the sea age, rope
people, e.g., olmecatl(N)=
ollin/roll rope/mecatl(N)=
me(r)cat/do(letra)=market.
the inca= in ca(N)=
the/in-ca/being, quechua(idiom)=
oquichtli ua(N)= man(hood)owners,
later, o(r)qui(ch)d/tli, as in,
orquidectomy(surgery), call their
master weavers, mama(quechua)=
ma ma(N)=carry the nethand, as in,
teomama(N)=deo carrier/priest.
ehecatl/hecate is the goddess,
her hands were weaving women/mama
who carried el niño dios.
she later hands her crown over
to mary at ravenna,
san apoolinari, there in the mosaic
of the 22virgin martyrs,
she's present as 2 archangels either side of
enthroned mary jesus in her
lap, the 3king lord of princes/
piltzintecuhtli in front of her,
and the 22 weir hens=her son,
quetzalcoatl's birthday in the
tonalamatl/book of souls, 22d day.
9 ehecatl in the 2nd trecena of
ocelotl, priestly sign and animal
of the firedrill birthing cave
goddess, tlatlatzolteotl, our
chthonic/chitoni(N)=spark thea,
the first goddess.
from what i can tell of the origin of weaving, it may have
started not in the east, but north,
as ehecatl/hecate is in the northern quadrant of the booktunes,
where you would expect the climate/
cima(N) would dictate clothing,
then it descends to the danube and travels east, but before that we
have weave from tree/treow/teotl,
and that would be north too, e.g.,
ainu, of course palm and cane/acatl(N). but for cold europe the first
weavings would be from wool/uelana,
and the wool weave goddess would be
ehecatl/hecate, as in heck/heckle
(a linen process), now that throws
my wool theory off, as that may
have started with the harappians
in india and moved to egypt,
isn't the world wonderfully complex? who needs et's?.