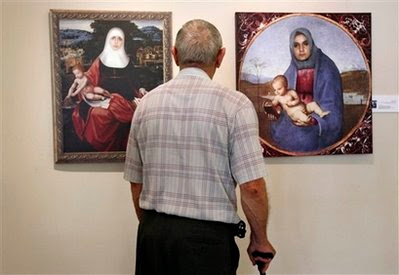 I found this article absolutely fascinating! I do not understand why a female who becomes a suicide bomber (or by proxy, such a female's family) would feel flattered to be compared to the Virgin Mary who, after all, is a symbol of (1) Patriarchal Religious Repression and (2) an underground symbol of Goddess worship - both things which Islam purports to abhor :) From Yahoo News Israel: pictures of St. Mary as terrorist removed By AMY TEIBEL, Associated Press Writer Amy Teibel, Associated Press Writer – Thu Sep 3, 11:11 am ET JERUSALEM – The Israeli journalists' union on Thursday took down a series of pictures that superimposed the faces of female Palestinian suicide bombers on Madonna-and-child paintings after the images sparked a public furor. Yossi Bar-Mocha, the head of the National Federation of Israeli Journalists, said his organization removed the pictures from its Tel Aviv headquarters for fear they would offend people who lost relatives in militant attacks. One of the artists, Galina Bleikh, said their intention was not to glorify or justify the bombers' actions. She and her partner, Lilia Chak, tried to address a subject that "pains the whole country" in the exhibit, titled ""Woman, Mother, Murderer: An Exhibit on Female Terror," she explained. "How can a woman who comes into the world with the role of loving and giving life become a source of hatred and murder?" Bleikh added, speaking before the pictures were taken down. Neither of the artists could immediately be reached afterward. The seven canvases, part of a larger exhibition, splice the bombers' faces onto works by Botticelli, Raphael and other eminent artists. Bleikh told The Associated Press that the show's concept was sparked by a suicide attack near her Jerusalem home carried out by a female bomber. "The message is that the baby in the arms of a woman is in danger," she said. "The contrast of the symbol of love, the Madonna, with the face of a killer — it works. It hurts the souls of women who look at it." That message did not filter through to some of the politicians and relatives of terror attack victims who objected to the works. The art display was to open without the seven contentious pieces on Thursday night. Lawmaker Yochanan Plesner of the Kadima Party called the exhibit a "despicable" public relations ploy. Almagor, an Israeli organization representing victims of militant attacks, said the paintings glorified the bombers. "These pictures will become a hit in the Arab world," said Dr. Aryeh Bachrach, head of Almagor's bereaved parents forum. "Depicting Palestinian women murderers as saints is an important propaganda achievement for terror organizations," said Bachrach, whose son was killed by Palestinian gunmen while hiking in the West Bank in 1995. Journalists' union head Bar-Mocha said he was unaware of the pictures' content ahead of time and after consulting with board members and legal counsel, decided the sensibilities of terror victims' relatives trumped concerns over freedom of expression. "If I must hear the cries of the bereaved families who lost their loved ones at the hands of these murderers, then I would favor them over these murderers and the images that are depicted as Christian saints," he said. The uproar was reminiscent of a controversy that arose in 2004 in Sweden after an Israeli-born artist mounted an installation showing a small ship carrying a picture of a female suicide bomber sailing in a rectangular pool filled with red-colored water. The artist, Dror Feiler, said the piece was mean to call attention to how weak, lonely people can be capable of horrible things. But the then-Israeli ambassador to Sweden, Zvi Mazel, said the exhibit glorified suicide bombers and he threw a spotlight at the installation, trying to damage it and causing a diplomatic flap between the two countries.
Posted by Jan at 7:37 PM