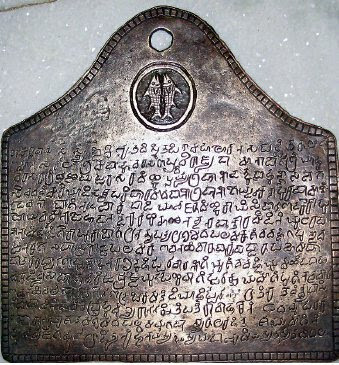 From The Hindu Online November 19, 2009 Copper plate inscription throws new light on Alupas Pramod Mellegatti SHIMOGA: A rare copper plate inscription collected by a numismatic expert and retired lecturer of Shimoga Khandob Rao throws new light on the Alupas who ruled parts of the Malnad and coastal districts of Karnataka for thousand years from 450 AD making Udyavara, Mangalore, Barkur and Mudbidre as their capitals. Mr. Rao is said to have collected the inscription from a copper vessel dealer of Kollegal in Chamrajnagar district. S.G. Samak of DVS Pre-University Independent College in Shimoga and archaeologist, who has deciphered the inscription, says that the Alupas, who ruled today’s districts of Dakshina Kannada, Udupi and a part of Shimoga, are credited with having the longest reign in Karnataka for nearly a thousand years. He says that the inscription is written on a copper plate measuring 20 x 20 cm. At the top is the figure of twin fishes, the royal emblem of the Alupas. There are 14 lines written in typical Rashtrakuta characters. “Hence, it can be assigned to the 8th century AD,” he says. Dr. Samak says that the inscription belongs to Aluvarasa II of Alupa family. “It mentions that Aluvarasa and Ereyyaparasa made a grant to Belmannu Sabha, free from tax to be paid to Shivalli on the day of the Solar eclipse. This grant was made in the administrative sub-division of Manideva of Kantavara and the document was prepared in the presence of Chokkapadi Bhatta. The grant was to be protected by Boygavarama of Kapu, Nanda of Bela, Nanda of Kolunur, Medini of Santuru and Urapppana. An interesting feature of the copper plate inscription is that the contents are similar to that of Belmannu copper plates discovered in 1973 by Late Gururaj Bhat of Udupi. Belmannu copper plates are claimed to be the earliest copper plate inscriptions in Kannada. “But the difference is the Belmannu inscription is written on five copper plates in 28 lines, whereas the present inscription is written on a single plate in 14 lines,” says Dr. Samak.
**************************************
What struck me about this image right away was the "double fishes" at the top - they reminded me so much of Indus "fish" symbols. Of course, this copper plate was inscribed at least 2,000 years after the height of the Indus civilization - but I wonder - is there a connection that was passed down from generation to generation as the original Indus Valley settlers migrated south and east?
Posted by Jan at 8:13 PM