More Statues and Older than the Terracotta Warriors! 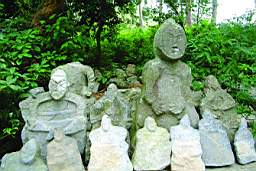 A large cache of ancient stone statues outnumbering the Qin Terracotta Warriors was found in the depths of the Nanling Mountains located in Dao County of Yongzhou City, according to the Xiang Gan Yue Gui Archeology Summit Forum held in Yongzhou, Hunan Province on Aug. 17.

Tang Zhongyong, director of the Dao County Administrative Office, said the group of stone statues can be called another wonder of the world. There are a large number of stone statues, unique technologies, a long history as well as abundant content.

The group of stone statues is located at the worship site of Guizai Mountain, which is 1 kilometer to the south of Tianguangdong Village, Xianglinpu Town, Dao County in Hunan Province, and is part of the Nanling Mountains.

Tang said that the Guizai Mountain site is a large ancient worship site. There are over 5,000 vivid stone statues at the site, covering an area of 15,000 square meters. They are statues of civil officials, military officers, pregnant women and all kinds of common soldiers and their height varies from 30 to 100 centimeters.

In addition, over 90 percent of these stone statues were carved before the Qin Dynasty and some were carved in the Tang, Song and Yuan dynasties. It is a large integration of ancient Chinese sacrificial culture.
Tang added that the Guizai Mountain stone statues are the largest group of stone portraits found in China by far. According to the statistics of the Chinese Stone Sculpture Museum and archaeology experts in Hunan, there are over 5,000 stone statues on the ground and a large number of stone statues buried about two meters below the ground. The number of stone statues is more than that of the Qin Terracotta Warriors, the eighth wonder of the world.

Based on the existing information and field investigations, archeologists deduced that Guizai Mountain with these stone statues was simply a large altar. Prehistoric people chose the site as an altar and placed stone statues on it. The stone statues have a primitive sacrificial or commemorative meaning and have a history of thousands of years.

By People's Daily Online
Posted by Jan at 7:47 PM