For this version of the World Cup, which used to be a sort of candidates' tournament to determine the player who would have the right to challenge for the world chess championship title, the ultimate prize has deteriorated to three spots in something-or-other -- I can't keep up with these continual changes but, frankly, it didn't sound all that important to me.  The players who participate in the FIDE events these days are in it for the money, and the top players in the world don't need FIDE to feed their pocketbooks, that is a large reason why they've bowed out.

That being said, there is still a hell of lot of chess - and good chess - being played, by the participants in these FIDE events.  We may even see brilliancy.  That is the lure, of course, to spectators.  Not that I would recognize it, my level of play doesn't allow me to do so, but I do appreciate it when it is reported on by others who know a hell of a lot more about the nuts and bolts of actually playing the game than I do! If you're interested in more than bare result reporting, by all means darlings, do look up other chess websites to read reports and/or discussion on the games:  Our friends include Susan Polgar's blog, Alexandra Kosteniuk's blog, Chessdom, Chess Vibes, and of course, The Week in Chess.  There are many other fine chess sites out on the internet as well.

Round 1 is complete!  As I learned earlier today, one of the USA's own hotties, GM Sam Shankland, knocked out a venerated GM from Hungary, Peter Leko.  That's like saying Holy Pawn, Batman! some 10,000 times in a row without any time-outs!

Even more important that Mr. Hunky's success against GM Leko today though, is HOW the ladies did!

Hope I did not miss any of the USA team.  I took the information above from The Week in Chess. 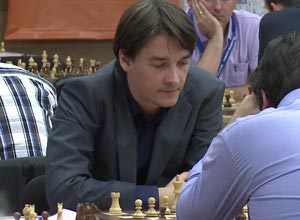 Mr. Hottie of the Day:  GM Alexander Morozevich of Russia.  I've been madly in love with this man forever, it seems.  He's sort of an Errol Flynn of chess in his play - a swashbuckler through and through.  You never know what Moro may throw at you (figuratively speaking, of course) on the chess board.  And to think that he nearly retired, oh my!  I'm very happy he decided to re-dedicate himself to our beloved game!  A recently resurgent Moro drew his game today with GM Stelios Halkias (GRE).
Posted by Jan at 4:20 PM

When I see Morozevich, I think of the hero from "The Mummy". I can almost picture him shouting "Evy!!!" as the foul beast looms.

Ooooooh, Brendan Frasier certainly is a handsome fellow too! I love the new "Mummy" movies, they are so corny and at the same time so much fun and entertaining, and they certainly have the "eueewwwww" factor going! I usually close my eyes during the ickiest parts. I think if more ladies realized how good looking and personable some of the male chess players are, they'd become instant groupies. Hmmmm, guess I'll just keep them all to myself, bwwwwaaaaaahhhhhaaaaaa!