Original Paper on the "Warrior Queen" of El-Peru Waka'

Published at Washington University, this is the original paper upon which recent news articles took their information.  It's in PDF format and - at least on this 'old' Toshiba laptop, took a few minutes to download.  "Wak" means centipede.  Queen K'abel herself, however, was a royal princess from the Clan Kan (snake).

During the seventh century AD the Wak (centipede) dynasty rulers were loyal vassals to the Kan (Snake) dynasty rulers. The Kan king Yuhknoom Ch’een the Great (600-686) conquered the Petén during his reign (636-686) and established an empire in the Maya lowlands. He was aided in this effort by the Wak king K’inich Bahlam II, to whom he married a woman of his family, the royal princess K’abel. K’abel ruled with her husband K’inich Bahlam for at least 20 years (672-692) although it is likely that she ruled longer than this. She was the military governor of the Wak kingdom for the emperor and she carried the title Kaloomte’, Supreme Warrior, higher in authority than her husband the king. She was the most powerful woman we know about in western Petén during the Kan Empire of the seventh century. She was of the same generation as the successor to Yuhknoom Ch’een, Yuhknoom Yich’aak K’ahk’. Experts in ancient Maya history believe that these two rulers were siblings and the children of Emperor Yuhknoom Ch’een. What is certain is that all three of these rulers figure prominently in the texts on carved monuments at El Perú-Waka’.

Kaloomte’ K’abel is well known in Maya archaeology because a beautiful portrait of her, El Peru Stela 34, was looted from El Perú-Waka’ in the sixties and is in the Cleveland Art Museum. K’inich Bahlam II on El Peru Stela 33 is in the Kimbell Art Museum and a replica of this monument will be installed at Waka’.
And here she is: 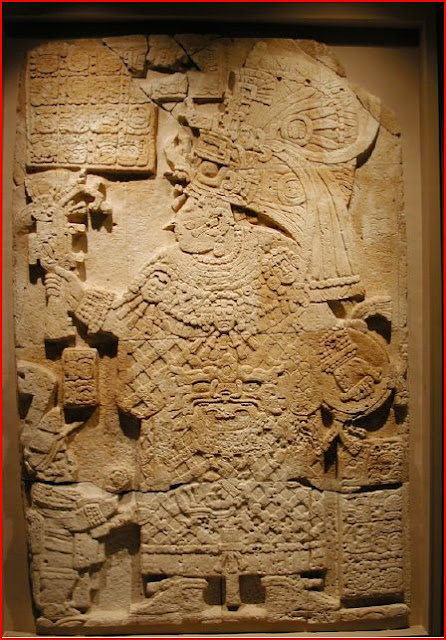 Okay, is it just me?  Doesn't the Queen have a particularly "European" nose???

Sooooo, as we know, the Serpent reared its head in the New World as well as the Old World, in unexpected ways, in the form of another powerful female.  Let he who has eyes, see....
Posted by Jan at 8:35 PM