An important discovery.  Take a look at this: 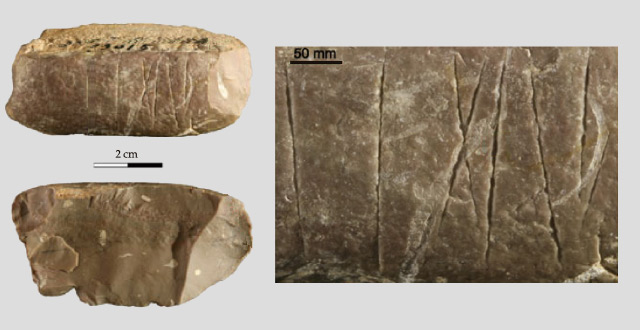 When I saw it, my first thought was "lunar calendar."  It seems to me to be a crescent moon on the far right (enlarged image); and on the smaller image, upper left, it looks like there is at least one and possibly two smaller crescent moons carved to the far right.  I'm not sure about that though, since the image isn't large enough.  The deeply engraved straight lines and the "X" near the center -- not sure what those could be, but perhaps a marking off of time between certain celestial events?  I'm no expert, I'm just writing about what I'm seeing when I look at this rock.  Here's the article:

Chinese archaeologists have discovered a stunning 30,000-year-old engraved stone artifact in a collection of stone tools unearthed at the Paleolithic site of Shuidonggou in 1980.

“This engraved stone artifact was a recent accidental discovery during our analysis of the stone tool assemblage unearthed at the Shuidonggou site in 1980,” explained Dr Fei Peng, postdoctoral research fellow at the Graduate University of the Chinese Academy of Sciences and lead author of a paper reporting the discovery in the Chinese Science Bulletin.

“It is the first engraved non-organic artifact from the entire Paleolithic of China. However, it is not just a coincidence. We were aware that when analyzing the materials unearthed from the site during excavations in the 1920s, French archaeologist Henry Breuil observed parallel incisions on the surface of siliceous pebbles. Unfortunately, he did not provide details on those incised pebbles. So during our lithic analysis, we paid special attention to the possible existence of engraved objects,” Dr Peng said.

“One of the cortical faces bears 8 lines, clearly visible to naked eyes, which were engraved into the thick cortex. All the incisions are closely perpendicular to the long axis of the core. Two incisions are crossed and others are parallel lines. With the exception of the rightmost line, these incisions almost extend to the ridge which is constituted by the two cortical surfaces and two of them even extend to the other cortical surface,” the authors described.

Prof Xing Gao of the Institute of Vertebrate Paleontology and Paleoanthropology in Beijing, co-author of the paper, said: “Shuidonggou site includes 12 localities, ranging in date from Early Late to Late Paleolithic. The engraved stone artifact was found at Locality 1, which is about 30,000 years old.”

Dr Peng added: “we used a digital microscope to observe all the incisions, obtaining many 3D images. After excluding the possibility of natural cracking, trampling and animal-induced damage, and unintentional human by-products, we believe that the incisions were made by intentional behavior. Although we cannot be sure of the function of these incisions, the straight shape of each line shows that it was incised once over a short time interval without repeated cutting, implying the possibility of counting or recording at that time.”

“Furthermore, creation of such an engraved object may indicate the possible existence of complex communicative systems such as language,” he said.

“In addition to the engraved stone artifact, one ostrich egg bead was unearthed from Locality 1. The lithic assemblage of this locality includes blade production and elongated tool blanks. The blade technology was probably introduced from the Altai region of Russian Siberia, according to comparison between lithic assemblages. The flake technology is typical of the Late Paleolithic in north China.”

“So, who created the ostrich beads and incisions? Were they made by the populations who migrated from the west, such as from the Altai region? Or were they the result of acculturation, such that aborigines in north China learned this kind of technology from exogenous populations? Or were they created solely by the local people because of technological renovation or cognitive advancement?”

“At this time, we cannot provide a clear scenario. We need not only more archaeological evidence, but also evidence from anthropological, genetic and other disciplines. Integrating all information from different fields of study is the means to solve the puzzle,” Dr Peng concluded.
_______
Bibliographic information: Fei Peng et al. An engraved artifact from Shuidonggou, an Early Late Paleolithic Site in Northwest China. Chinese Science Bulletin, July 2012; doi: 10.1007/s11434-012-5317-6
Posted by Jan at 3:20 PM