Female Fighter Pilots Were Expunged from "Return of the Jedi"

What?  What kind of bullshit is this!  Un-fricking-believable!  1983 wasn't exactly the dark ages; although sexism in the United States was still rampant, it wasn't as blatant as it used to be back in the days of Ike E. Women had burned their bras years before, and with the advent of birth control pills, it was a sexual free for all.  The Equal Rights Amendment had been shot down by certain state legislatures (we all know who THEY are, don't we) but other laws were then passed guaranteeing certain rights for females.  Not perfect but we've come a long fricking way, baby, from 1951, the year I was born.  And all these years I thought George Lucas was an advanced form of human being.  How disappointing to find out he is just another penis looking for a ho to hide in.  Too chicken shit to stand up for his editorial independence.  Bah!  Spit spit.

Three female Rebel pilots were discharged from ‘Return of the Jedi’

By Bryan Enk | Movie Talk – Wed, Dec 12, 2012 2:36 PM EST
The Rebel Alliance now seems a little bit less like a galactic Boys Club. [Are you kidding?  It was even worse than I thought!  And the man who wrote this piece is full of shit.]

The final battle against the Death Star in "Star Wars: Episode VI - Return of the Jedi" (1983) used to have a bit more of a woman's touch as it's been revealed that there were actually three female Rebel pilots taking on TIE Fighters and Star Destroyers as they waited for Han Solo and the gang to blow up the shield generator bunker on Endor (ah, old war stories!).

There were three unnamed lady pilots in "Jedi," two of which can be seen in the extras for the Blu-ray release of the original "Star Wars" trilogy. Both of them were A-Wing pilots, with one even getting a line ("Got it," which was actually dubbed by a male actor in post-production) before getting shot down by a TIE Fighter seconds later. The second pilot is, surprisingly, considerably older ... and could now indeed be the inspiration for a new wave of fan fiction (she's a retired Rebel vet who's allowed to come back for one last hurrah against the Empire after being deemed too old for duty during the Battle of Yavin in "A New Hope," perhaps?). [Why is it surprising that a woman would be a fighter pilot for the Rebels and what, exactly, does "considerably older" mean?  Was that particular female pilot in her 80's?"]

There was a third female pilot in the Battle of Endor as well. French actress Vivienne Chandler didn't make it into the Blu-ray extras, even though she spent three days on the "Jedi" set and had an entire line of dialogue between herself and another pilot. She also got to fly the much more iconic X-Wing, the ship of choice for her Rebel colleague, Luke Skywalker. Even though actual footage of her in full Rebel mode doesn't seem to exist, she's managed to stay a part of the "Star Wars" universe as she's now a staple on the convention circuit.

There's been no official explanation as to why these characters were cut, though fan speculation suggests that the filmmakers may have deemed the sight of ladies getting blown to smithereens to be too intense for moviegoers ... especially when one could pass for your grandmother. [Oh really? But it's been perfectly all right all these years to show women being terrorized, raped, tortured, murdered and cut up with knives and every kind of saw you can imagine in countless movies to hit the big screen as well as many television series episodes, but you know, that's because chicks were just born to be victims, baby, hey hey.]

We have a feeling a lot of the Rebellion's apparent gender discrimination will have dissolved in time for "Episode VII." "Star Wars" needs women, and "Star Wars" will get them if Disney has anything to say about it. [Yeah.  Right.]

Luke, I'm your female co-worker: How women pilots helped take down the Death Star (...before getting chopped down in the editing suite)
December 14, 2014 The Mail Online

Hey, here's the "old chick" female fighter pilot, her photo is in the Mail Online article: 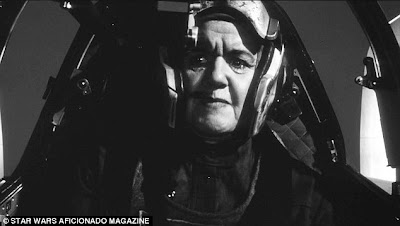 But it seems gender - and even age - are not barriers to being a good Jedi, with one of the females appearing to be in her late 40s or early 50s.

They're kidding, right?  I don't know any woman in her late 40's or early 50's who looks like this - not even in 1983.  I'm 61 and I don't look like this.  It is absolutely cool, however, that this actress was cast in this role.  I expect the film people piled on extra make-up to give her those deeply grooved frown and jowl lines.  Just imagine the experience she would have had as a pilot, to survive all those years and all of the battles, when the male teenage wasteds were being blown out of the skies left and right.  Ha!   No way was this actress in her late 40's or early 50's.  Geez, some people are so clueless. 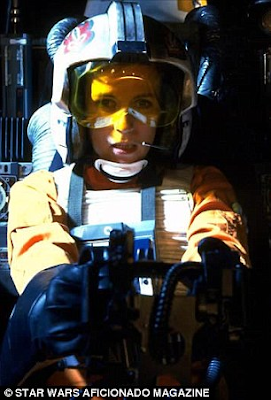 She looks like Princess Leia in that photo, doesn't she...
Posted by Jan at 3:20 PM