Awesome!  From cntv.cn  Thre is a video but I was not able to embed it, I could not get the code to work right.  So, check out the video at the link (click on the title below).

02-17-2013 08:37 BJT
The ruins of a Buddhist temple dating back 1,500 years ago have been discovered in China's largest desert--the Taklimakan in Xinjiang Uygur autonomous region. The findings offer valuable research material for historians studying the development of Buddhism in China. 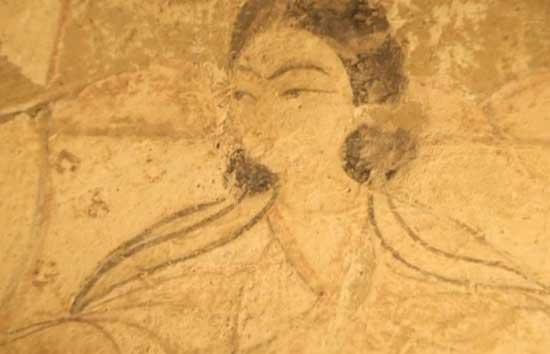 These historic findings shed light on the development of Buddhism in China. In total there are more than 3,000 pieces of relics. The most eye-catching are the mural paintings. They are executed in a Greco-Buddhist art style, which was seldom seen after the 6th century.

Archaeologist Dr. Wu Xinhua said, "It’s very unique. We’ve never come across such mural paintings in this area before. You can see the fusion of Western and eastern cultures alongside the spread of Buddhism in ancient China."

The treasures are all from a Buddhist temple located in the southern Taklimakan Desert. Excavation was completed in June last year. Experts believe the temple dates back to the Southern and Northern Dynasties, about 1,500 years ago.

Dr. Wu said, "The hall is the largest of its kind found in the Taklimakan Desert since the first archaeologist came to work in the area in the 20th century. The structure of the temple is very unique. We believe it is one of the earliest Buddhist temples in China."

The temple has become the point of convergence for scholars studying how Buddhism arrived in China from India, and its early development in the country.
Posted by Jan at 8:53 PM