Celebrating at the Holler House in Milwaukee, Wisconsin

Friday night (June 14) I was out with those wild and crazy and - did I say wild, cougars ladies that I ride the bus with on the way home from the office in the evenings.  They are so much fun - and good supportive friends, too.

Most of my readers are not familiar with my hometown of Milwaukee, Wisconsin, USA.  The Holler House bar is housed in a building that was built in or around 1908.  It houses private residence space on the upper floors, a 2-lane bowling alley in the basement, and a small bar on the first (ground) floor) with private rooms in the back.  It is located on South 21st (or is that 20th?) Street and West Lincoln Avenue in an old area of Milwaukee's southside, right across the street from a part of the eastern border of the venerable (and quite beautiful) Forest Home Cemetery.

The building/bar has been owned by the same family since it was first built.  Right now, the current owner (who married into the family), Marcy, is in her late 80's.  I had not met her, or visited the Holler House, until this past Friday evening.  She is a beautiful woman, let me tell you -- she would have been stunning in her younger years.  One of the Bus Ladies - JoAnn a/k/a Ginger Snap (snap fingers here, cuz she's a Spicey Cookie), has been hanging out there for years and so I've heard a lot about the Holler House over the past three years or so, since we've gradually built up the Crazy Cougars - okay, some of them don't like the term "cougars" but personally I think it's quite fitting.

Back to Holler House --  A recent fire inspection of  the Holler House noted the presence of flammable materials hanging from the ceiling.  Said flammable materials consist of various sizes and all types of women's brassieres, the oldest ones hanging up there since women's liberation finally took hold in old-fashioned Milwaukee in the 1970s.  The story is that one wild and crazy night some female bar patrons, and Marcy, decided to take them off, take them off, take them ALL OFF, and the bras ended hanging up on various other decorations (I use that term loosely) hanging and/or tacked on to the ceiling and beams that span the width of the room that houses the bar.

The fire inspector issued a citation to the Holler House to remove the flammable material.  Marcy, the owner, objected.  But as things unfolded, her time to appeal the citation expired prior to when she sought "official" help.  Being a law-abiding citizen, Marcy had one of of her relatives remove the offending materials so she would not run the risk of incurring hefty daily fines for violation of the removal order. She then turned to her local alderman and, with the help of friends, contacted local media.  This is one savvy lady.  One thing led to another and both Alderman and media took up the complaint on her behalf.  After all, Marcy argued, those same bras had been hanging up there since the 1970's, and no one ever complained about them being flammable (or inflaming, har :)) before.

Justice has prevailed, TA DA!  The order was reversed and rescinded.  YAY MILWAUKEE COMMON COUNCIL!  YAY PUBLICITY IN THE MILWAUKEE JOURNAL/SENTINEL AND LOCAL NEWS STATIONS! YAH ALDERMAN BOB DONOVAN FOR HELPING!  The story even made Reuters!

And so Friday tonight, in celebration of being able to once again go back to the way things were before, in a very special celebration, the bras were re-hung, and folks were encouraged to bring in their own bras, donated or purchased, or a selection from Holler House's own extensive collection, to be hung or re-hung from the ceiling of the Holler House Bar!  A fund-raiser, YAY!  Two local charities close to our hearts, the Hope House and the ABCD Foundation, Melodie Wilson's foundation (Wilson was a former Miss Wisconsin and Miss America contestant, she was a popular local news anchor for many years but, sadly, died of breast cancer at too young an age, leaving young children behind).  One could hang a bra, or have it hung on your behalf, for a $5 donation.  Five bucks could also purchase a memorial tee shirt.  Such a deal!  Tees were a hot commodity.  Check out the tee I bought -- I hung it on a hanger from my dinette chandy to get a good photo of it: 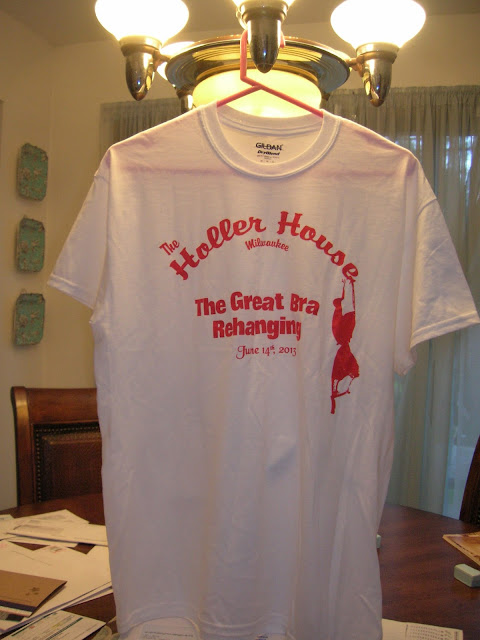 (Please ignore my messy dinette - I was not expecting to take photos in there last Friday night and the tabletop is cluttered with mail and bills -- got to get around to paying them soon...  On a happy note, I purchased a MEDIUM shirt, LARGE is now too big for me to wear, yippee!)

The Holler House jukebox is FABULOUS!  It wasn't long before all of us were out in whatever space we could find dancing and grooving. But let me tell you, darlings, the music is LOUD.

I had my camera along but, sadly, most of my pictures are not very good - and no group shot of all of us together:  JoAnn, Darlene, Anni, Thelma, Michele, Dodi, and me. Here are some of my photos: 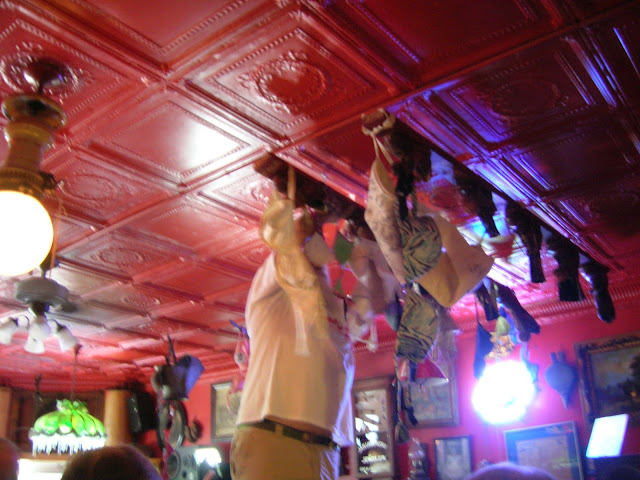 In the photo above, Santa Claus (you'll see him in some later pictures when his face isn't stuffed into hanging brassieres) is up on a ladder hanging my bra -- a satin black underwire Olga bra from the days when I was a svelt 34C (I'm now, sadly, a 38D). 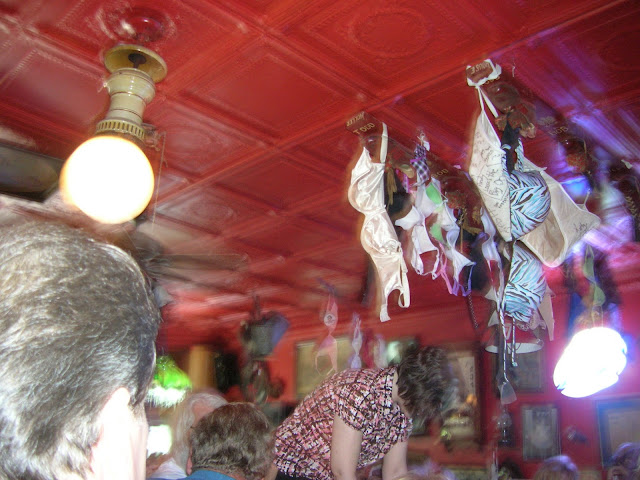 In this photo, our bus buddy Thelma (Thelma and I visited Las Vegas - her first visit ever - in April) is coming down from the ladder after having hung up her own donated black bra. She's so cute!  She is too young to be a cougar, she is an "honorary cougar." 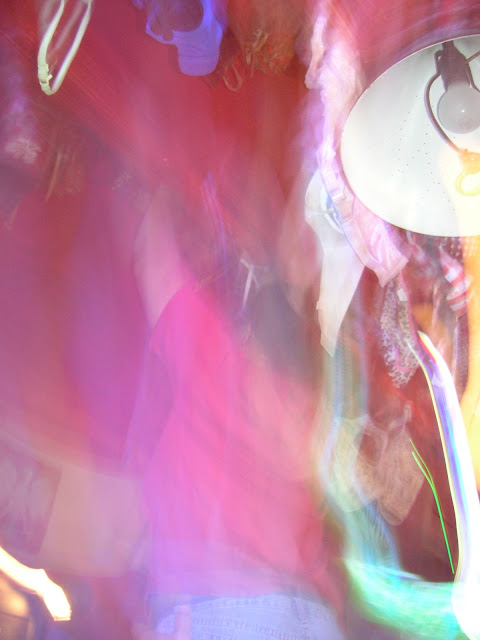 Unfortunately, the photo above did not turn out very well, but it's the only photo I've got of our bus buddy Michele, hanging a Holler House bra. 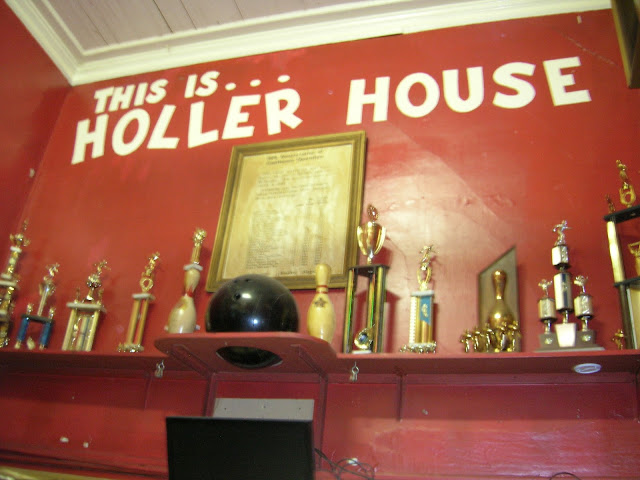 The photo above was taken from the stair landing going down to the two bowling lanes down in the Holler House basement.  The Holler House was opened in 1908 and has the two oldest sanctioned lanes authenticated by the United States Bowling Congress (I think that is what it is called). 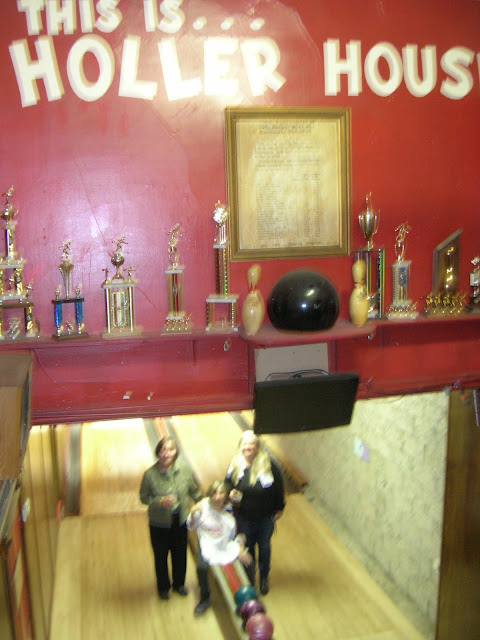 Ginger Snap (a/k/a JoAnn) took this photo of me (left), Anni (middle) and Dodi (right), downstairs at the Holler House lanes.  Anni has on one of the Great Bra Re-Hanging tee shirts.  I am holding a glass of Chardonnay, and Dodi is holding a cocktail.  I have no idea what Anni is holding - maybe a pussy coin purse?  She doesn't drink anything except soda.  Oh, maybe it's a soda glass.  The wall on the right side of the pic was reconstructed some years back to eliminate some foundation problems, and many of the concrete blocks now sports autographs of patrons, fans, and famous and not-so-famous bowlers.  It was a hoot reading some of them -- we were careful not to go on to the lanes themselves, we stayed on the approaches.  Those approaches were rebuilt a few years back, funded by the Bowling Congress, bless it's heart! 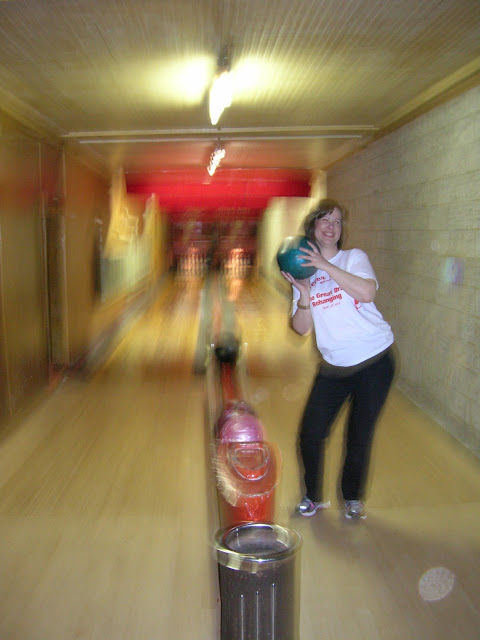 Here's a video taken on Friday June 14, 2013 by one of our local television stations, WTMJ-TV Channel 4  and broadcast on the 10 PM news.  About 28 seconds into the actual video (after commercials) you get a glimpse of a group of women inside the bar, including little Anni in a green wig (she looks a little like a lepruchan) and the backs of several of our heads, including mine (I think), LOL!  Woo woo - our 15 minutes of fame!  Later in the video there is a glimpse of Ginger Snap a/k/a JoAnn can be seen descending from the ladder.

The Holler House's wonderful fund-raiser and the events leading up to the Great Bra Re-Hanging made the news in The Chicago Tribune, 90 miles to our south.  The article featured a separate link to several nice and clear (unlike mine and JoAnn's) photographs.

And now you're going to see Santa in his summer garb, courtesy of The Chicago Tribune: 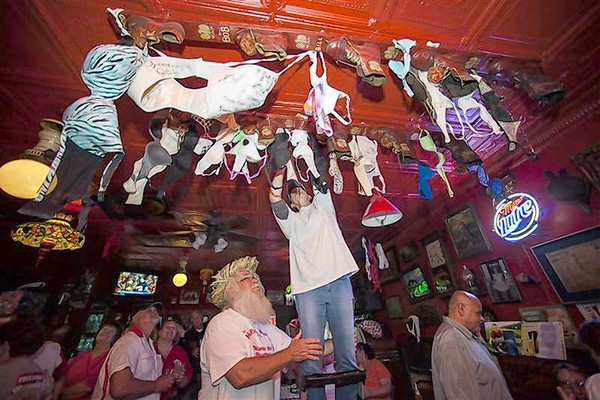 Heh heh heh!  As I and Thelma were both there for the hanging of our respective black bras, I can tell you with 100% certainty that my donated bra is covering the right arm of the lady up on the ladder and Thelma's donated bra is partially covering the left arm of said lady.  Our bras will go down in herstory...  One of our friendly local busdrivers on the route we take to/from work is on the far right.  In the lower right hand corner, you can just see Pepper Spray staring into the camera -- is that a "V" for Victory sign she's making - or a "come hither" signal with her hand... 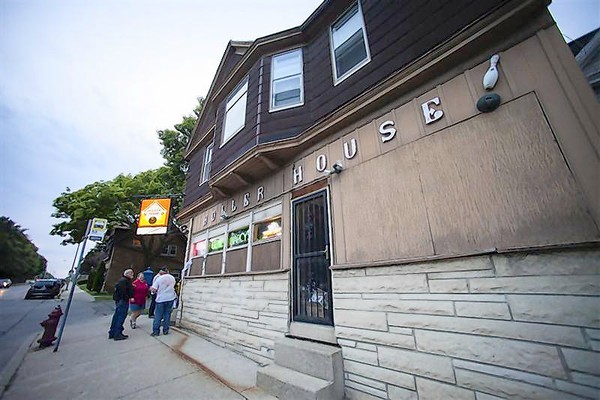 Photo above from The Chicago Tribune, an outshot shot of the Holler House.  Like I said, just a small neighborhood bar. 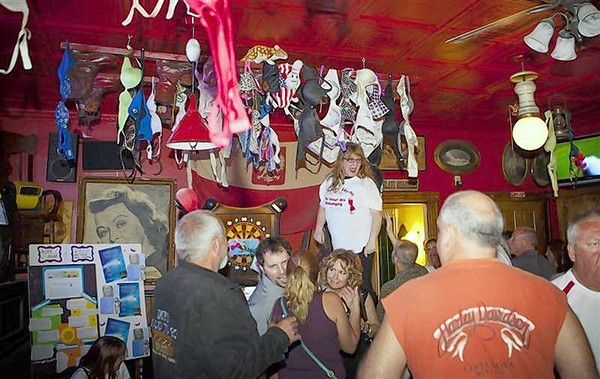 And in this photo you can see our irrepressible Pepper Spray up on the ladder giving a campaign speech (she's running for President of the United States in 2016) and in the lower left hand corner a demure Ginger Snap laughing her ass butt off.  ELECT PEPPER SPRAY PRESIDENT IN 2016!  She intends to run as a Wisconsin Born-Again Republidem, offering a new, refreshing political alternative to the old boring do-nothing snores in Congress who currently control our "New Normal" USA.