The True Size of Africa

Well, this is very interesting!  And a great reminder that what we see when we're looking at maps isn't necessarily reality.

The US, China, India and most of Europe could fit inside Africa and there'd still be room.

Ever notice how huge Greenland looks on a map? It's because most maps use the Mercator Projection. On it, Greenland looks to be the same size as Africa. In reality, Africa is actually 14 times larger. Replicating the globe onto a flat surface distorts the sizes of the countries yet many have no idea. 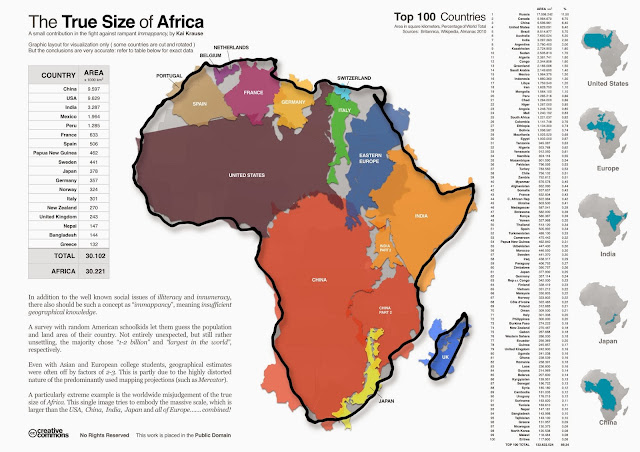 Computer graphics designer Kai Krause created the illustration above showing the true size of Africa. Yes, we know Africa is a continent being compared to countries but it's fascinating to see its sheer size next to common references.

Writers at The Economist created a similar map below using Gall's Stereographic Cylindrical Projection. Even though the result is different, they still draw a similar conclusion. Africa is much bigger than we thought:

Or as the West Wing so aptly explains, "Nothing is where you think it is":