Stored on a shelf for over 100 hundred years, a rare anthropological treasure was recently discovered in the Springfield Science Museum’s permanent collections. Museum Director David Stier, who has worked in museums collections for almost 30 years, describes the discovery as nothing less than “the find of a lifetime.” 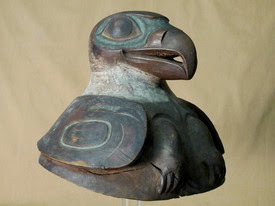 The mystery began to unfold when Museum staffers began to select objects from the over 200,000 items in the Museum’s collections for a new display titled “People of the Northwest Coast.” Dr. Ellen Savulis, the Science Museum’s Curator of Anthropology, was intrigued by one of the items described in collections records as simply an “Aleutian hat.” The object was relatively large, ornately carved, and made from a single piece of dense wood. Although Dr. Savulis’ main area of expertise is Northeastern United States archaeology, she had the foresight to question whether hats made by the Unangax, the inhabitants of the Aleutian Islands, were typically made from such dense wood. Upon further investigation, Dr. Savulis found that the only type of wooden hat made in the treeless Aleutians is the hunting hat or visor, made from a thin plank of driftwood bent into a lopsided cone. None of this information matched the object she had in front of her.

Dr. Savulis suspected that she had a helmet of some kind, and enlisted the help of Steve Henrikson, Curator of Collections at the Alaska State Museum in Juneau. After hearing the description and an extensive viewing of artifact images, Mr. Henrikson responded enthusiastically, “This is a Tlingit war helmet, absolutely, no question!” He went on to say that “it’s very rare - there are less than 100 Tlingit war helmets in existence that we know of. I’ve been studying them for over 20 years and I’m sure I’ve seen most of them.”

Museum records show that the artifact was accepted into collections sometime after 1899, the year that the Springfield Science Museum (formerly the Museum of Natural History) moved into its own building at the Quadrangle. The source of the artifact was not known, and it carried the simple label “Aleutian hat.” Having limited experience with cultural materials, museum specialist Albertus Lovejoy Dakin accepted the accuracy of the object’s label and entered it as such in the collection records. Some 40 years later the artifact received a permanent museum collection number from museum director Leo D. Otis, who still had no reason to dispute the “Aleutian hat” claim. There the artifact remained in its spot in the permanent collections, carefully preserved and unheralded, waiting to be found.

According to Mr. Henrikson, we now know that the object is indeed a war helmet from the Tlingit people of southeast Alaska. The style of the carving and decoration on the helmet (probably the emblem of a clan) dates it to the mid-19th century or earlier. With the mass importation of firearms to the region in the mid-1800’s, this sort of body armor became relegated to ceremonial uses. Today, a few helmets are still brought out at ceremonial gatherings, such as potlatches, to commemorate prominent events and honor past clan elders. Because they are associated with combat, the helmets are not actually worn on the head during such peaceful gatherings, but are instead held in hand or perhaps held over the head of someone needing spiritual support.

Henrikson estimates that there are approximately 95 war helmets in existence today, mostly in large museum collections. Many of these were collected by Russian explorers on the battlefield following clashes with the Tlingit. The largest collection of Tlingit armor is at the Peter the Great Museum of Anthropology in St. Petersburg.

Beginning as protection for Tlingit warriors in battle, war helmets today serve the Tlingit as healing reminders of their rich and ancient history. A glimpse of this rich history can be seen starting Thursday, December 26, when the helmet will be placed on display for the first time since arriving in Springfield over a century ago.
Posted by Jan at 6:51 PM