The Thistle and the Rose Chess Set Returns!

Before Christmas I was contacted by a person who owns a COMPLETE Thistle and Rose chess set, and I was about swooning over the prospect of publishing the photos he promised to send me.  True to his word, these arrived before Christmas, but I've only just now am publishing them: 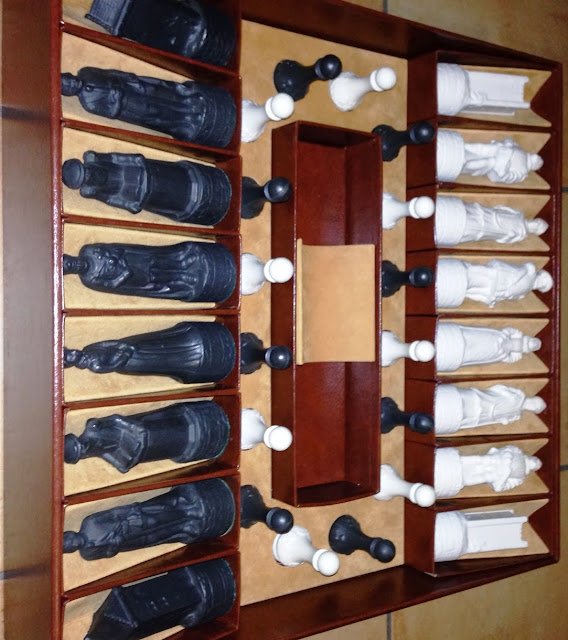 I apologize for the lopsided photos. When I downloaded I saved them oriented the best way to view them, but for a reason unknown to me (and one I cannot figure out how to correct), they are posting here all cock-eyed. But I hope you will be able to enjoy them, nonetheless. 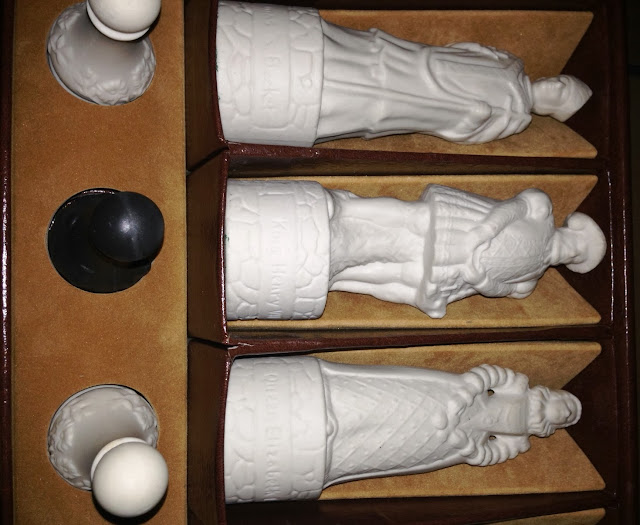 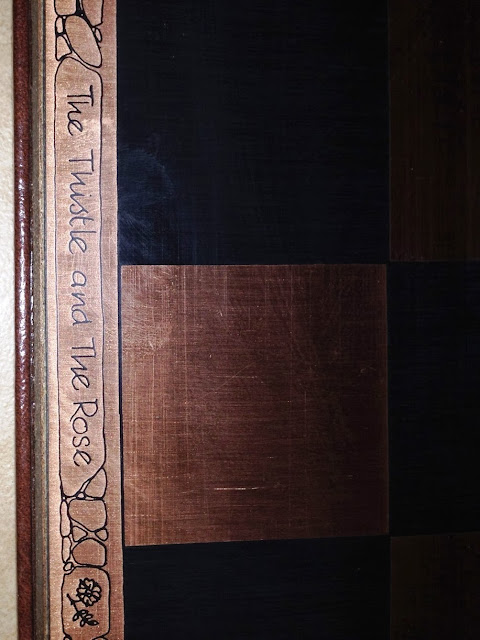 He has the pawns!!!!  He received the complete set (with board) as a gift from a neighbor some 30 years ago who, I hope I've got this correctly -- himself received it as gift during a business trip.  My set, in contrast, was collected over several flights by Ms. JS when she worked for an oil company and was a frequent flyer on British Caledonia Airlines.

I've tried, off and on, for a few years to collect some pawns -- unsuccessfully.  E-bay is a bait pit when it comes to Thistle and Rose pawns, as I learned the hard way.  I didn't know -- before --  that E-bay allows vendors to rig the bidding.  Now I know better, and I don't shop at E-bay anymore.  I refuse to be cheated.  I've therefore no pawns for my efforts to join the beautiful pieces that were gifted to me by Judith S. some years ago, before she retired from our mutual employer.  Goddess bless her, she knew I was "into" chess and wanted to pass her Beneagle's pieces along to someone she figured would appreciate them.

I am forever grateful to you, Judith!  I posted about this wonderful gift earlier:

I probably won't ever own the pawns to complete my set, as Mr. T (I will call him, as I do not recall whether I obtained his consent to publish his name, and I was too lazy to check back through our email correspondence to find out, duh!) helpfully sent me a link to The Whiskey Exchange to illustrate what full sets of the Beneagle's Thistle and Rose are going for now -- 499 BPS (British Pounds Sterling) for a full set without board and 599 BPS with the board.  Holy Hathor!  [Does anyone remember Mr. T from the television series "The A Team?"  One of my favorite shows!]

More photos are promised, and I will post them when they arrive.  Such a lovely set! I am NOT a collector but, by default, I happen to own three chess sets, two of which I've purchased over the years because I fell in love with them (not collector-worthy) and one set that was a gift (the Lewis Chess pieces set), plus my incomplete Thistle and Rose set (also a gift).  I also own a USCF regulation set with a roll-up board and woven vinyl shoulder case to hold the lot. I believe I paid something like $14 for the entirety, on sale a few years ago.  Woo woo!

Now maybe I'm crazy (a likely possibility) -- but I dug out my research from a few years ago and found some interesting things price-wise:

June 29, 2009, a "Wade Full Set of White (Rose) Chess Pieces Beneagles - winning bid: GPB 51.00.  I believe that pawns were not included, as the photograph on the E-bay entry that printed out on Septenber 8, 2009 showed only the major pieces.

Also printed out on September 8, 2009, an auction preview sheet from Scotchwisky.com, Lot 634, estimated at 400 - 600 BPS, pieces minus whisky and I'm not clear from the description whether pawns were included, but a "copper chess-board" was included.

If I haven't written this before, Fredrick Mellor worked for eorge Wade & Sons, Ltd., Stoke-on-Trent, and the pieces were "fashioned in the fine Wade Porcelain at Portadown in Northern Ireland."
Posted by Jan at 4:52 PM

I may have what you want. A complete set minus the alcohol.

I have a complete set

I have a complete set if you, or anyone you know, are interested.
All 32 pieces, no damage, clean! I can provide pics.
No board or case...loose.