By Daisy Carrington, for CNN 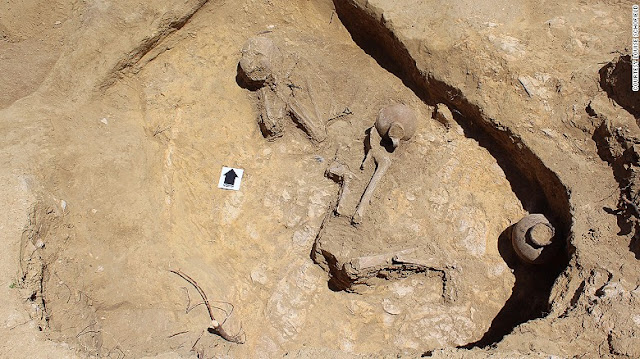 It was the Queen of Sheba that first drew Louise Schofield -- an archaeologist and former curator at the British Museum -- to the Gheralta plateau in northern Ethiopia. She'd heard tell of a 20-foot stone stele carved with an inscription and a symbol often linked to the biblical queen: a sun and crescent moon.
"The story of the Queen of Sheba has a central place in the heart of all Ethiopians, so I became interested in the story myself," she recalls (Sheba is thought to be located in parts of Ethiopia).
It was this initial visit that ultimately led her to discover the 2,000-year-old remains of a character she fondly refers to as "sleeping beauty."
The grave was discovered at the stone stele, in an area that was once part of the ancient kingdom of Aksum, which today encompasses Ethiopia and Eritrea. Inside, Schofield's team found the skeleton of a woman posed in a resting position, with her chin laid gently on one hand. A Roman-era bronze mirror was placed before her face. The corpse was surrounded with glass vessels (to catch the tears of the dead), as well as a bronze cosmetics spoon and a lump of kohl eyeliner.
"She must have been very wealthy, and probably well-loved to be placed in this position, and judging by all the items of finery around her," surmised Schofield.
The dig also uncovered several other graves, all of which had several bodies buried beneath. In some, she found the remains of large warriors clad who each wore an iron bangle.
"We think they were warriors from a battle," she says.
The unusual find suggests trade between Rome and Aksum started at least 200 years earlier than previously believed.
As the dig is less than a month old, there's still a lot of information yet to come in about this restful lady. A bone expert wasn't able to ascertain her age at the time of death because the pelvis -- which usually provides a close approximation -- had been consumed by termites. Schofield hopes that analysis of the teeth will provide some answers.
"There was something very personal about the way she was lying," Schofield says. The remains were also found surrounded by clay containers that likely contained food or drink (these have also been sent off for analysis).
"The food, drink and cosmetics were all presumably left for her to use in the afterlife. She was pre-Christian and that's how people buried their dead then," says Schofield.
Shofield has a bit of the Midas touch when it comes to extraordinary finds. She also recently uncovered a Roman-era perfume flask in the same cemetery, although by chance. The archaeologist is also the director of London-based NGO The Tigray Trust, and the item was first brought to her attention by a local farmer she knew through the organization.
"I had been showing around a member of the Peace Corps who had been working in a nearby town (around the site), and we'd been out in the blazing sun for 8 hours, when a farmer I knew said his friend found something old, and he'd been keeping it for me," she recalls.
"I was apologizing to the Peace Corps guy. I told him, 'it could be an old coffee pot, but you never know, it could be the Queen of Sheba's perfume flask.'"
Posted by Jan at 11:31 AM