The "Ghost Deer" of Northern Wisconsin 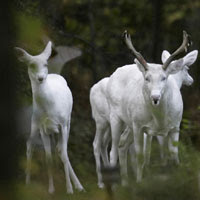 Incredibly beautiful animals - white deer - not albinos because these have blue eyes, not the characteristic pink eye of a true albino (lacking all pigment genes). I had no idea that such animals existed and, lo and behold, there they were on page one of the Milwaukee Journal Sentinel this morning. It lifted my heart just looking at the beautiful photographs, as much as the previous story about the brutal monsters unleasing terror on women and children in Congo plunged me into despair.

'It's like a white flash'
As elusive as they are majestic, white deer haunt the North Woods
By BILL GLAUBERbglauber@journalsentinel.com
Posted: Oct. 6, 2007

There is a place in Wisconsin's North Woods, in rural Vilas County, outside Boulder Junction, where the white deer roam.

They are as white as a covering of fresh snow, white like mystical and magical ghosts.
They run wild and free, show up at feeders and amble down roads. They are protected and cannot be hunted in Wisconsin.
They remain part of a timeless landscape.
"A cluster of white deer has been up there since the 1950s, maybe before," says Keith McCaffery, a retired deer biologist from Rhinelander.

"We've got 1.8 million deer or thereabouts (in Wisconsin), and we've had these scattered reports of white deer," McCaffery says. "I don't know how many there are in this Boulder Junction area. They're pretty darn scarce."
Linda Winn, a wildlife biologist in Vilas County for the Department of Natural Resources, says she believes there are several different populations of white deer in the area.
"It seems like there are more around," she says. "We don't keep an estimate of them like that. We don't do anything special with them."
Some people believe the animals are albino deer, while others say they are white deer. The animals' eyes are not pink - they are pale blue. "Albino means a true, total absence of pigmentation, so their eyes would be pink," says Brian Kirkpatrick, a professor specializing in genetics at the University of Wisconsin-Madison College of Agricultural and Life Sciences.
In Boulder Junction, citizens take pride in the deer.
"People are really, really interested in the deer, keep close tabs on them," says photographer Jeff Richter, who with author John Bates recently published a book, "White Deer: Ghosts of the Forest." "These white deer really get a hook into people."
Jeffrey Phelps, a Journal Sentinel photographer, recently traveled to Vilas County to find and photograph the deer. He was drawn there by a story he heard from a hunter. Many years ago, the hunter took his son into the woods and saw a glorious white deer, a 10-point buck. The hunter told the child, "Take a close look at that. You may never see another one like that the rest of your life."
To get an idea of where the deer might be, Phelps talked with wildlife specialists, tavern owners and shopkeepers, stopped people walking along back roads, headed out before dawn and at dusk, traveled slowly and cautiously.
Over five days he had 10 sightings. Some of the photos he snapped were blurred - he was shaking with emotion. Other photos, though, capture the poetry, beauty and majesty of the animals.
"You see one in the dark forest and then it vanishes," Phelps says. "It's like a white flash."
Posted by Jan at 9:16 AM

I live in SW Wis - Grant Co.- and have seen white doe on two occasions. On one of those sightings she was leading twin fawns of the normal coloration. I do not know if both sightings were the same doe or not, but never the less, it was a wonderful thing to see. Last time I saw one was in 2005.

Excellent commentary and the photos are great! There are "white deer" in various regions including far northern California where I live. And -- while not as white as the illusive "Ghost Deer" of Wisconsin -- they are sacred to many Native American tribes. Below is a link to a photo of a "white deer" which I took yesterday. (Dec. 15, 2009)