The Goddess Brigid and the Birds 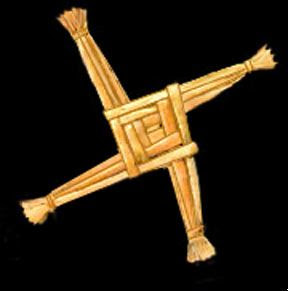 Heh heh, thought I was just kidding about the goddess/bird connection? Nah! I wouldn't try to fool you like that. (Image: a crios Bride, or Brigid cross)

MOST of the folklore surrounding St Brigid, including various pious practices associated with her, seem at this time to have been forgotten. The practices themselves, visiting holy wells, making 'stations' at specific places linked to the saint's memory, have drifted off into a netherworld of the forgotten like a bank of dispersing fairy mist. It is the opposite in continental Europe. There local saints are publicly commemorated vigorously with colourful pageantry -- and perhaps a bit of religion as well. It's an example to us all.

Anyway, we still have St Patrick, though we are moving him about this year, I hear. And then, of course, St Brigid might not have been a saintly lady after all! But more of that later.

This is her month now, and the time of her traditional birds, the oystercatcher and skylark, to be making themselves more noticeable to mark the beginning of spring and the start of the traditional agricultural year.

Larks, however, have seriously fallen in numbers as have linnets, another Brigidine songster. The lark's soaring notes in the clear air were usually taken as a sign of good weather on the way. There may be fewer of them but oystercatchers are plentiful and have been a common coastal sight over the winter months. Most will be moving off to northern Europe and Iceland now but several thousands will remain to breed.

The oystercatcher's link with Brigid is in one of its old Gaelic names (Ireland and Scotland) of giollabride, or Brigid's servant, and the thinning of the great winter flocks of yesteryear indicated that her feast day was nigh.

But back to the folklore of customs, cures, processions and straw crosses and far from pious practices as house calling by 'Biddy Boys' collecting money for feasts of their own! These groups used to be common in Kildare, Brigid's native heath, and south Kerry where an effigy of the saint called a brideog was carries about. The catchcry was : "Here comes Brigid dressed in white, give her something for the night."

These used to be territorial feuds, especially around the big estates in the Killarney area such as Muckross House. The local gentry encouraged the biddies for their after-dinner amusement!

More innocent children's visitations were recalled on the Great Blasket kin 1922 by Tomas O Crohan who once found two pilgrims on his threshold, a little girl with a figure of a child in her arms and a little boy. He gave them some sugar and they gave him a blessing. But the most widespread custom still remembered and practised was the making of a crios Bride -- it became RTE's symbol -- to hang in the home. These crosses were diamond or lozenge shaped and some primary school teachers still encourage children to make them for the feast day.

However (shock, horror!) there may never have been a St. Brigid in the first place as the original lady was a pagan goddess! According to Sean O Suilleabhain writing in the Journal of the Royal Society of the Antiquaries of Ireland, the saint's feast "would seem to be a Christianisation of one of the focal points of the agricultural year."

Whether she was saint or goddess we all look forward to better weather now that spring is here. After all, she did promise "every second day fine, from my own day onward..." And may it dry up the sodden landscape.
- Joe Kennedy

A totally Roman Catholic Church gloss on the history of the "real person" Brigid - see how she single-handedly took over the sacred oak sanctuary of the Goddess Brigid, extinguished the perpetual flame in honor of the Goddess, "re-dedicated" the sactuary to a Christian church and re-lit the flame in honor of Jesus. Yeah, right. And my current measurements are 38/23/34. Ahem.

Check out Spiralgoddess' information on Brigid - if you can stand the never-ending music (turn your speakers off)...

A comprehensive overview of Brigid
Posted by Jan at 7:13 PM