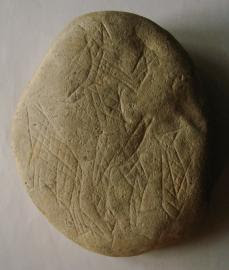 This is a really interesting discovery. Sensational Stone Age discovery October 20, 2008 An ancient stone with a phallic motif provides new information on Stone Age art and symbols. A young couple walking along Horsens Fjord in August this year made a sensational discovery – a 5-7,000 year old stone with a scratched motif. The 13x10x4 cm. limestone shows a man with an erect phallus and two fish. Archaeologists at Horsens museum were taken aback, and immediately passed the stone on the National Museum to determine whether the motif was indeed from the Stone Age or simply a later work of art using an ancient style. Ertebølle Culture “But now we’re sure. We believe the stone to be from the Ertebølle Culture between 5,400 and 3,900 BC. It’s the sort of discovery that is only made once a decade,” says Horsens Museum Archaeologist Per Borup. Apart from its phallic representation, the man in the motif seems to have some form of head dress with animal ears – possibly in the tradition of an Indian shaman. Edited by Julian Isherwood
Posted by Jan at 9:53 AM