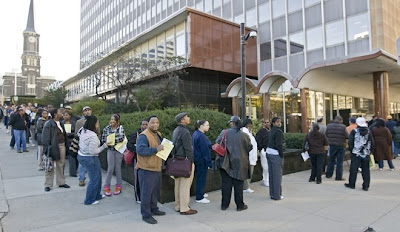 Here is a photo from this morning's Milwaukee Journal/Sentinel showing a long line of people waiting to cast early ballots at the Municipal Building in downtown Milwaukee. People will be able to cast early ballots in Milwaukee through Monday. The photo was taken yesterday. The Municipal Building is across the street and down the block from the building in which I work, I know the area well, so I can tell you that the line of people stretched down two sides of the block in addition to snaking up the stairs to the doors into the building where the voting machines are set up. Wow! I'm thrilled to see this much early turnout. Some information from the article:

In another article from today's Journal/Sentinel, I read that some election officials are predicting as high a turnout of 70% eligible voters in the city of Milwaukee. Milwaukee County, about 1,000,000 people, traditionally is dominated by the population of the City of Milwaukee, which votes Democratic. Indications from early voting point once again in that direction - more registered Democrats voting early.