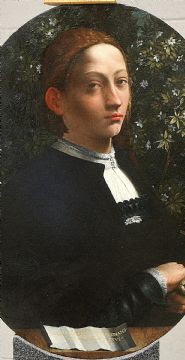 Uma Thurman... (photo of Uma Thurman from December, 2007, by Odd Andersen) From The Times November 26, 2008 Only known painting of Lucrezia Borgia discovered in Australian gallery Anne Barrowclough in Sydney A mysterious Renaissance portrait that has hung in an Australian art gallery for 43 years has been identified as potentially the only painting in existence of the infamous femme fatale Lucrezia Borgia Over four decades after the National Gallery of Victoria (NGV) took possession of the oval painting, entitled Portrait of a Youth by an unknown artist, the gallery's director revealed the painting today as a work by the Renaissace artist Dosso Dossi. "What was previously a portrait of an unknown sitter by an unidentified artist now seems likely to be one of the most significant portraits surviving from the Renaissance, by one of the great Northern Italian painters", said Gerard Vaughan. He said the portrait could be worth "many millions." "Dosso Dossi is a very important painter but not known to the general public so it's an important discovery for the art world but the really important thing for the general public is that we have the only known portrait of the most famous and notorious woman in Renaissance history," he said. Bought by the NGV in 1965, the oval painting mystified experts who always believed it to be of a young male. [Say what? Darlings, I'm no expert, to be sure, but it sure looks like a femme to me!] But two years of scientific analysis and art history research in Italy, Australia and the US, carried out by the gallery's curator Carl Villis led him to conclude that it could only be of Lucrezia Borgia, painted by Giovanni di Niccolo de Luteri, better known as Dosso Dossi, a contemporary of Titian, Raphael and Michelangelo. Lucrezia Borgia was the Duchess of Ferrara from 1502 - 1519 but as the illegitimate daughter of the murderous Cardinal Rodrigo Borgia, her name, as with all the Borgias, became synonymous with villainy. Mr. Villis said at first he thought it was "preposterous" that the subject of the painting could be Lucrezia Borgia. "It was the last thing I expected when I started out on the whole process," he told The Times. Analysis of the painting's pigments indicated that it was most probably painted by Dossi, he said. The clues to the subject of the portrait lay in the detail of the painting. The myrtle bush, highly symbolic in Renaissance painting, refers to the goddess Venus which indicated the figure was a woman, not a man as originally thought. An inscripton at the bottom of the portrait refers to virtue and beauty, another code for the female identity of the sitter. The dagger held by the figure, although unheard of in Renaissance portraits of women, symbolised the Roman heroine Lucrezia, renowned for plunging a dagger into her chest after being raped by the son of the King of Rome. While these were interesting but circumstantial pieces of evidence, Mr Villis said one of the deciding factors was the similarity between the portrait and a bronze portrait medal of Lucrezia Borgia, made in 1502 and which remains the only reliable likeness of her features. "It has been very exciting to unlock the secrets of this beautiful and enigmatic painting, which now has unique standing in view of the fame of its sitter and the strength of the artist," "When you align the details side by side, the facial features are very similar," he said. David Hulme, a Sydney art expert and valuer, decribed the find as "exciting and extraordinary." "It's probably worth millions," he said. The last work of Dossi's sold in London in 1999 for £900,000. There are other portraits which have been said to be of Lucrezia Borgia, but none have been accepted by scholars. A year ago, the NGV was hugely embarrassed after it was revealed that it had wrongly attributed a painting by an unknown Dutch painter to Vincent Van Gogh. While this portrait has not been authenticated by other art scholars, Mr Villis said he "has not met anyone who disagreed" with with his discovery. "We are putting it out there so people can consider the ideas behind it," he said.
Posted by Jan at 2:59 PM