Dem bones, dem bones... Story from China Daily Record find of oracle bones in Shaanxi By Ma Lie (China Daily)Updated: 2008-11-12 07:10 XI'AN -- Archaeologists in Shaanxi province have unearthed more than 1,100 oracle bone characters, shedding new light on the number of such inscriptions in existence. The find was made at a cluster of tombs in Qishan county that date back to the Western Zhou Dynasty (c. 11th century-771 BC). Lei Xingshan, head of the dig team, said in Xi'an yesterday: "Prior to our discovery at the Temple of Duke Zhou, less than 1,100 Chinese characters written on pieces of bone and tortoiseshell had ever been found." Members of the team have been unearthing scripts almost every day since the excavation began on Sept 1, and there are now more than 1,100 readable words, which is a new record, he said. Among the finds is the character for "king", which could help archaeologists learn more about the lives of the Zhou kings and the region in which they lived, Lei said. Also, after excavating more than 100 commoners' tombs in the area around the duke's temple, the team has built up a large collection of pottery and bronze ware that will help paint a better picture of the lives of ordinary people during the Western Zhou period, he said. "Coincidentally, we also found several items from the Yangshao period of the neolithic era (5,000-7,000 years ago); the first time such relics have been found near the Temple of Duke Zhou," he said. Zhou Chunmao, a researcher with the Shaanxi archaeology research institute, told China Daily Tuesday that the discovery of the new oracle bone scripts has great significance for the understanding of the formation of the Western Zhou dynasty and the structure of society at that time. Since the first oracle bones were found in 1898, Chinese archaeologists have unearthed more than 100,000 pieces of bone and tortoiseshell inscribed with characters. Archaeologists' interest in the area around the Temple of Duke Zhou was aroused in December 2003, after a team led by Peking University Professor Xu Tianjin found two inscriptions featuring 55 characters there. Prior to the record haul by Lei's team, 760 inscriptions dating from the Western Zhou Dynasty had been found in the area. Duke Zhou was the fourth son of the founding King Wenwang of the Western Zhou Dynasty, and regent to to his nephew King Chengwang.
*************************** 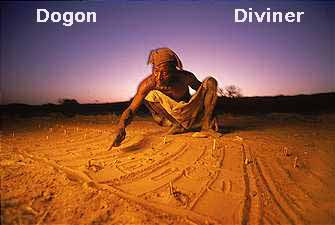 Divination may be at the root of the earliest forms of "board" games. Chess historians pay scant attention to this aspect of the development of games, seeming to insist that chess is somehow "different" (hint: it's not, darlings). Theory suggests that the earliest "boards" were drawn in the earth with a stick or a finger. The shamans of the Dogon to this day continue to construct complex board-like structures by drawing in the earth in preparation for divination. Another line of thought traces the earliest development of "board" games to the development of agriculture - it is fascinating to see depictions of "fields" and the layout of entire towns along "chessboard" like grids that date back to 8000 years ago.
Posted by Jan at 9:31 PM