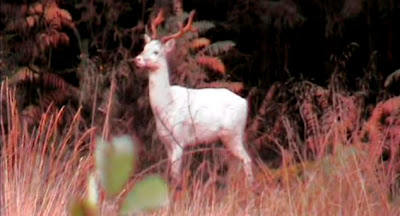 Pictured: Mythical white stag found in the forests of Gloucestershire By Daily Mail Reporter Last updated at 2:07 AM on 07th December 2009 White stags have long been associated with mythology and legend, an elusive yet magnificent beast. King Arthur was left frustrated by his attempts to capture one, as were the Kings and Queens of Narnia, who chased the creature through the woods and found themselves tumbling out of a wardrobe. But photographer Ken Grindle has managed to get a little bit closer, taking this picture of the animal in the Forest of Dean in Gloucestershire. The majestic wild animal - long associated with mystery and good luck - was filmed by the wildlife enthusiast. Ken, 66, has been filming and photographing wildlife in the area for the past six years - but had never seen a white stag. 'I was very surprised to see it,' he said. 'I was camped in a shelter and was really fortunate. It just strolled right in front of me and calmly wandered around. He is a beautiful creature and it's really nice to be able to show people who perhaps can't make it into woodland what beautiful animals roam out there. 'I was lucky to be able to get some footage of it as well as the battery on my camera was running out. I wasn't sure I'd actually got it until I got home. I take the pictures to share with everyone as a lot of people can't get out into the woods to see this.' The Forest of Dean is thought to be home to an array of unusual and wild creatures including wild boar, big cats and white stags. [Thought to be home to... Oh come on, this is a relatively small area. We're not talking Yellowstone National Park! My guess is that this forest has been studied lots of times by various experts over the years and they have a very good idea of what wild life lives there.] Retired builder Ken added: 'There's a lot of talk about big cats in the Forest and that really would be something to see. I managed to stand my ground when some wild boar came out into the path in front of me but it might be a bit different if I saw a big cat.' Last year a white stag was spotted in the Scottish Highlands and was photographed by a member of a nature charity while she was on an expedition on the west coast. Fran Lockhart, of the John Muir Trust, a charity which protects wild land, said she was "thrilled" to spot the majestic beast, which is closely identified with the unicorn. In October 2007, a wild white stag was shot by poachers on the border between Devon and Cornwall, where horrified locals had known it by the name Snowy. It was decapitated and its 300lb carcase found hanging from a tree in a yard. It is thought the stag's head, along with its antlers, had been claimed as a trophy and could be mounted and possibly sold for thousands of pounds. White deer, closely identified with unicorns, have been potent figures in the mythology of many cultures. It is said to be bad luck to kill one. According to the Scots legend, in 1128, David I, King of Scotland decided to go hunting on the Feast Day of the Holy Rood, against the wishes of his priest. While hunting he saw a huge white stag, or "hart", and while giving chase he was thrown from his horse. The white hart charged forward to kill him, so David - son of Malcolm Canmore and St Margaret [I'm shocked! She wasn't a virgin!]- called on God to save him. As the king grasped the hart's antlers, they miraculously turned in to a large cross, and the beast raised its head and vanished. Inspired by his vision, King David built a shrine to the Holy Rood - meaning Holy Cross - on the spot where the miracle occurred. The ruin of Holyrood Abbey can still be seen today, at the foot of the Royal Mile next to Holyrood Palace. The White Hart Inn in Edinburgh's grassmarket, reputedly the oldest pub in the capital, took its name from the legend. The Celts considered white stags to be messengers from the "other world" and their appearance was said to herald some profound change in the lives of those who encountered them. In the Chronicles of Narnia, the White Stag is fabled to grant wishes to whoever catches him. And in the Arthurian legend, the white stag is the creature that can never be caught. King Arthur's repeatedly unsuccessful pursuit of the white stag represents mankind's quest for spiritual knowledge. In Christianity a white stag was said to be instrumental in the conversion of the martyr Saint Eustace after he saw a vision of the animal that told him he would suffer for Christ.
Posted by Jan at 6:48 PM

Thank you, Old Geezer. You're not old, but as for being a Geezer...only you can truly answer that one.