Wepwawet - Sacred "Opener of the Way"

I'm continuing research into the association of dogs with goddesses and gods, which I find of interest because, at least in parts of the ancient Middle East and also in ancient Greece, gaming pieces were often referred to as "dogs." For an overview of the dog's association with goddesses and gods in many cultures, see Dog as Diety, Ancestor and Royal Animal, by Paul Kekai Manansala.

Here is more information about the ancient (pre-dynastic) Egyptian wolf-god, Wepwawet, called "The Opener of the Way" (hieroglphyic rendering of Wepwawet - wpwAwt, from Ancient Egypt Online - Wepwawet). "Opener of the Ways." Egyptian jackal god. [Wepwawet was also depicted as a wolf with jackal's head and a man with a wolf's head or jackal's head; in whatever form he took, he was usually depicted with grey or greyish-white fur, attesting to his lupine origins.] 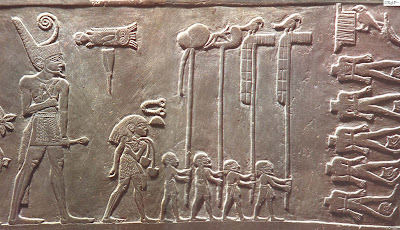 (Image from Late Predynastic and Early Dynastic Egypt, by Francesco Raffaele). Wepwawet had a dual role as a god of war and of the funerary cult, and could be said to "open the way" both for the armies of the pharaoh [as a scout and stealthy hunter/killer] and for the spirits of the dead. He originated as a god of Upper Egypt [that is, southern Egypt on a map], but his cult had spread throughout Egypt by the time of the Old Kingdom. Depicted as a jackal or in human form with the head of a jackal, often holding the 'shedshed', a standard which led the pharaoh to victory in war and on which the pharaoh was said to ascend into the sky after death. [There were four royal standards that were carried ahead of and led processions of Pharaoh. Here is one of the earliest depictions of the Royal Standards of which I am aware, from the Narmer Palette, c. 3500 BCE. The standard closest to Pharaoh carries the King's magical double (a/k/a his Twin), the linen-wrapped placenta (after-birth) from his birth. The second standard features a standing, alert Wepwawet. I also found this information from a Tour Egypt article: Wepwawet's image is generally portrayed with a uraeus and a hieroglyph that has been described as representing the king's placenta, surmounting a standard known as a shedshed. Thus, in later incarnations of the Royal Standards, an image of Wepwawet was substituted for the royal placenta, which by that time was no doubt judged as too valuable and too sacred to be exposed to the public and all the dangers that might entail. In still later times, two trailing ribbons substituted for the placenta.] Despite his origin in Upper Egypt, one inscription said that he was born in the sanctuary of the goddess Wadjet at Buto in the Nile delta. Another inscription identified him with Horus and thus by extension with the pharaoh. Wepwawet also symbolized the unification of Upper and Lower Egypt. In his capacity as a funerary deity he used his adze to break open the mouth of the deceased in the "opening of the mouth' ceremony which ensured that the person would have the enjoyment of all his faculties in the afterlife. At Abydos the 'procession of Wepwawet' initiated the mysteries of Osiris as a god of the dead. See: World Mythology - Egyptian Mythology, Wepwawet, at Thinkquest Egyptian Dreams, Wepwawet Crystal Links, Wepwawet (citing Budge's The Gods of the Egyptians) Tour Egypt, Wepwawet, the Jackal God of Abydos, by Taylor Ray Ellison Ancient Egypt Online, Wepwawet There is now quite a bit of information available online about the ancient practice of identifying a placenta with a newborn's "twin" or magical double - a belief not confined to predynastic Egypt. I remember hearing of "old wive's tales" of women burying the afterbirth (placenta and umbilical cord) of a newborn in secret in the dead of night to prevent it's being "captured" by the Devil or witches or - name your evil entity - and then used to control or even kill the newborn child - and this was in Europe thousands of years after the pharaohs had passed into herstory. If you are interested, try searches under pharaoh and placenta.
Posted by Jan at 8:16 PM